Gauche Town 6.12.17: The Problems With the Contenders 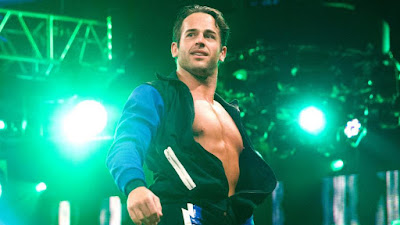 Roderick Strong is a very good wrestler. Seriously, watch his matches. They’re razor sharp in execution. Like, he’s in the right place before you know he’s supposed to be and nailing moves with incredible precision. He’s got a solid go-bag of moves, and when he hits his finisher, it feels like a finisher. He’s handsome, but not so handsome that you feel threatened he might steal your girlfriend. He’s competent on the mic. He’s setting his eyes on Bobby Roode’s NXT Championship and he’s got the crowd behind him, thanks in part to another great video package. He seems like he’s got the whole package.

So why is it every time I see him come out to the ring the first thing I think of is a default create-a-wrestler. He’s got the tools, but I really want to spiff him up with a flashy t-shirt and a pair of Kane’s boots, maybe a chef’s hat. Minus his actual in-ring ability, he is SO BORING. The best way to describe his ring gear is “on,” and not in the way Korn says it. More like “on his body, currently.” I can’t even tell you what he usually wears without looking at a picture, but if I wear to guess “navy blue trunks and probably boots” I bet I’d be close.

Roderick is so devoid of anything that can be considered “interesting” that it’s hard to even try. My imagination can conjure up things like a dragon with its head on its tail and its tail on its head, and the idea that Limp Bizkit was a pretty good band, but I can’t even begin to figure out how to make Captain Whitebread a memorable guy. WWE tried, though, and to their credit, it was a very nice video package. It was a glimpse into how his life has slightly improved since he’s recently had a kid. That’s great, I’m genuinely happy for him. But, like, the same way I’m happy that one of my Facebook friends who I’ve never met, or worse, met at a bar and don’t remember shit about, isn’t a Baron Corbin fan. Cool, me too, but it’s not a solid base for a friendship.

So, like I said, I recognise Roderick’s skill, it’s just wrapped in a pretty milquetoast package. I really can’t rally behind a guy just because he has wrestled in the past, and he had a kid recently. And this is coming from a guy who, as a professional manny, usually celebrates other people having kids by going to a fancy dinner. Strong’s probably not gonna pay me to watch his kid, so what do I care? 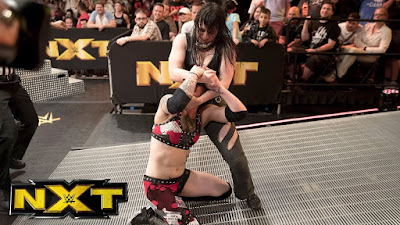 Ruby Riot and Nikki Cross are going to fight Asuka.

Maybe, Ruby got blasted in the head this weekend at Download Fest and apparently bled too much for her to do anything. But Nikki Cross is still a thing!


I would be way more excited about this match if we hadn’t just seen it. Also, Asuka doesn’t lose anymore, ever, no matter how bored and entitled she acts. The Women’s NXT Championship hasn’t changed hands in over a year. That’s...kinda awesome. But we’re entering the boring half of this kind of reign. The part where no one making decisions thinks anyone else can step up. She just skips through the arena, kicking the heads off her competitors like dandelions in a field. I guess this time it’s a Triple Threat ELIMINATION match, but that just makes me feel like it’s a slightly different match that Asuka can easily win. By kicking the heads off her competitors.

Fingers crossed that Ruby is fine, and that they can book this to be, if not surprising, then at least exciting. I honestly think Cross could make for an exciting champ. Riot is also fully capable, but she needs more to her than “I love punk!” It’s the equivalent of “I had a kid!” I grew up with punks having kids. It’s really not that exciting. If I were trying to convince a non-wrestling fan friend of mine (re: all of them) that pro wrestling is awesome, I’d probably tell them about Finn Balor turning into a demon sometimes, or two wrestlers who give tickets to other wrestlers for not being fashionable enough, or a lady who GLOWS. I’d probably skip the guy that “has a kid” and the girl who “listens to punk.”

Or this week’s NXT is part of the pre-taped stuff they did last month and you’re all laughing at me right now. 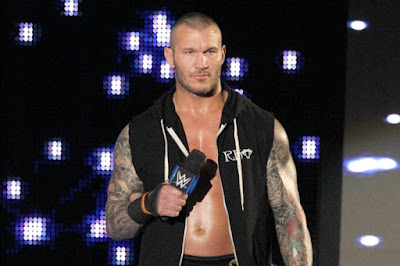 Whatever. If Randy wins the WWE Championship back a month after losing it, that’s just WWE admitting that they jumped the gun and don’t even want to see where this experimental booking could lead. Even worse, we’re stuck with a guy holding a belt like he got stuck with it. 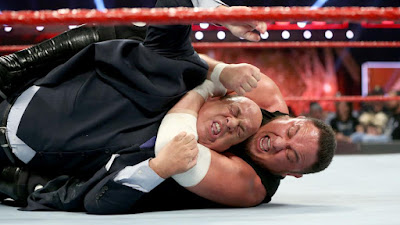 The more I think about it, the more I’m looking forward to the match. I HATED almost all of Extreme Rules. The only good part was the off-chance that Joe, Finn, or to a lesser extent, Bray, could feasibly win the main event. But even that hope was anchored by the fact that whoever DID win, was just going to get murdered by Brock at Fireballs 1.0. Or worse, Roman would just beat him, and the cycle would continue.

But Joe’s hot right now. Hot enough to start doing awful things to Paul Heyman, and that Coquina Clutch is being well-protected. It gives me hope that if he throws it on Brock, he’s got a chance. How fucking dope would it be if he muscled a suplex out of it, too? It would also solve a few other problems, like getting the Universal belt back on TV (although personally, I have no problem subscribing to Heyman’s way of thinking on this issue, but I totally get why some people don’t). Or using goddamn SAMOA JOE correctly, now that WWE has him. His debut on the SmackRaws should never have been “Destroyer, who loses to Builder after Creator is gone.” He should be waltzing in, ruining people’s streaks and good times, like Tazz with talent. No more bullshit. Set this bulldozer loose, he can choke the shit out everyone. How cool would it be to see Samoa Joe stand over Brock Lesnar victorious? It would do a lot to make the Raw brand seem like maybe they haven’t completely given up trying to make wrestling interesting.

He won’t win, though, because have you looked outside lately? All hope is dead.

Posted by Justin Enuffa Ballard at 9:16 AM