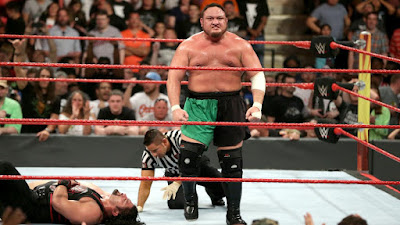 WWE Extreme Rules 2017 is in the books.  A solid effort all around, and the first unequivocally good WWE PPV since 'Mania.  For B PPVs it's the first good one since Elimination Chamber.  It was streamlined, there were multiple ***+ matches, nothing terribly offensive, and miraculously it was under three hours!  Plus, we have ourselves an AWESOME Universal Title match scheduled for next month.  One I've been waiting for since about 2006.  But let's talk about the matches.

The opener kicked things off unexpectedly well, as Dean Ambrose and The Miz had a really nice wrestling match.  I was down on the whole "DQ rule waived" thing, but both guys made good use of it and the booking was done in a way that no one looked like an idiot.  Ambrose and Miz had some very crisp grappling exchanges early on, Miz kept trying to draw Ambrose to flip out and get himself disqualified, and at one point even got Maryse to slap him hoping the ref would think she turned on him.  The ref didn't buy it, ejected Maryse, and instead Miz threw Ambrose into the ref.  There was another disqualification tease and Miz took advantage of a distracted Ambrose to hit the Skull Crushing Finale for the win and the belt.  Now, let's keep that damn thing on The Miz for a loooooong time.  I'm talkin' 15-18 months.  Let him finally break the record.  His heel schtick is gold right now.  He'll be a perfect Honky Tonk Man-esque long-term champ. 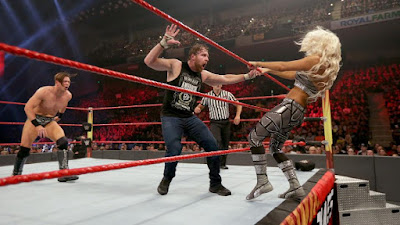 Next up was the first of two throwaways, as Sasha Banks and Rich Swann had a little RAW-type match against Alicia Fox and Noam Dar.  Not much going on in this one, but it was inoffensive and the right team won.  Sasha should now move back into Title contention.

The other abbreviated match, criminally so, was Alexa Bliss vs. Bayley.  I'm not sure why this only got five minutes but this was very abrupt.  They started out pretty strong and I was pleasantly surprised by the pace they were cutting.  And then it was just over.  Bayley ran into the kendo stick, hurting her shoulder, and Alexa DDT'd her to retain.  Who did Bayley piss off backstage?  Oh right, she's a likable babyface so we gotta make her look like a chump.  Incidentally all the matches except the mixed tag went to the heels.  Can't remember the last time that sorta thing happened.

Then we had the Hardyz-Cesaro/Sheamus cage match.  The first half of this felt a little plodding to me and probably had a few too many escape attempts, but it picked up in the second half.  I'm not sure why they went with escape rules, which I've always found kinda weak, especially in a tag match where it inevitably turns into a 2-on-1 scenario.  But in this case they used that situation well, with Jeff escaping halfway through but repeatedly trying to get back into the cage and eventually hitting Whisper in the Wind off the top.  This of course incapacitated Jeff, and Matt had to race to drag him out of the cage before C&S climbed out.  We had the ol' photo finish; Cesaro & Sheamus got to the floor first to capture the belts.  I'm all in favor of this title change - Cesaro & Sheamus never really got a run with the titles last time.  Solid match, but nothing amazing. 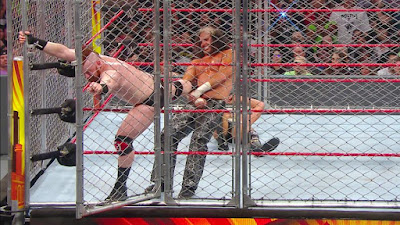 The Cruiserweight Title match got stuck in the death spot once again, but Neville and Austin Aries had a methodical but enjoyable submission match.  I will never understand why WWE has to have their own style of Cruiserweight match, but whatever.  This felt pretty tame after watching the Best of the Super Jrs final earlier in the day (Holy fuckin' shit Kushida-Ospreay was insane).  But they still got a good 18 minutes and delivered the third-best match on the card.  Neville landed the Red Arrow on Aries' back followed by Rings of Saturn for the submission.  Perfectly serviceable match but still below what these guys are capable of.  Also, since when are there countouts and disqualifications in a submission match?? 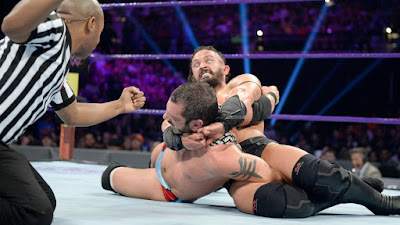 The main event was one of those spectacle matches that ended up better than it probably should've been.  We had some stories within the match that kept it memorable and gave it a logical flow.  Samoa Joe and Bray Wyatt teamed together for much of it, dominating most of the first half, before Wyatt screwed Joe over and they ended up fighting each other.  Another nice moment was the Reigns-Rollins tease early on that finally paid off later when they were the last two standing.  And of course we had two big high spots.  Reigns speared Balor and Joe through the barricade, bloodying his own mouth, and Rollins hit a frog splash on Wyatt through the announce table.  Finally it came down to Balor hitting Coup de Grace on Roman only for Joe to attack from behind and lock in the Coquina Clutch for the win, setting up Samoa Joe vs. Brock Lesnar. 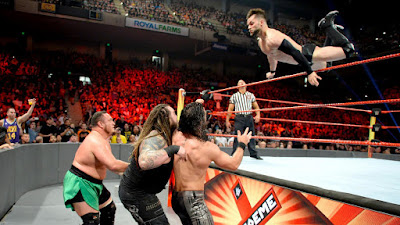 Joe vs. Brock is one of the few legit dream matches left in WWE and I've been clamoring for it ever since Joe signed with the company.  Joe's obviously not winning on July 9th, but this match needs to be a back and forth affair where Joe doesn't allow himself to get taken to Suplex City.  Joe should be the first guy since Taker to give Brock a real run for his money.  As long as this happens and the match gets a good amount of time I'll be a happy guy.  Also the idea of Samoa Joe headlining a WWE PPV in a singles match is totally surreal for me, in a good way.

As for Extreme Rules, it was an enjoyable show that didn't overstay its welcome and set up a big match down the line.  Not much to complain about here.

Best Match: Fatal 5-way
Worst Match: Alexa vs. Bayley
What I'd Change: Give Alexa and Bayley five more minutes.  They had something going until it was abruptly cut off.
Most Disappointing Match: Alexa-Bayley obviously
Most Pleasant Surprise: How strong the IC match was
Overall Rating: 8/10

Posted by Justin Enuffa Ballard at 10:16 AM