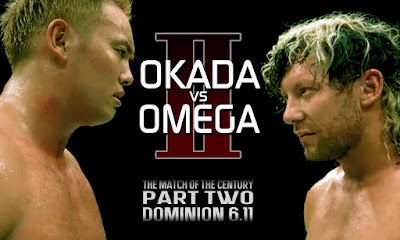 In a year when the company, especially its top champion, are churning out classics like a five-star match assembly line, NJPW Dominion 2017 was yet another homerun for the world's greatest current wrestling promotion.  Its nine-match lineup included nary a misstep; the matches ranged from "entertaining opening match fluff" to "pretty good" to "goddamn awesome" to "transcendent."  By my calculations the show included four ****+ matches, the last of which served as an in-ring Godfather 2 to its predecessor.  Five months after Kazuchika Okada and Kenny Omega lit the wrestling world ablaze with their epic Tokyo Dome main event for the ages, they've done it a second time, and based on the result it's clear we're all going to be lucky enough to witness a third.

First though, let's look at the undercard.

It's a tough call which PPV was better, Dominion 2017 or WrestleKingdom 11.  If you compare all but the final three matches on each show, Dominion wins hands down.

The opening 8-man tag was quick, energetic and inoffensive.  Nothing much at stake but everyone got a little time to warm up the crowd, and team Tiger Mask won after Togi Makabe landed the King Kong Knee Drop on Nakanishi.  I will say, cartoon series or not, it seems criminal to have Kota Ibushi curtain-jerking in these multi-man throwaway matches.  I dearly hope he's in the G1 tournament, mask or no mask (preferably the latter).  He's far too valuable as an upper tier star to be wasted in this gimmick.  Yes I know he got the one match with Okada but that placement on the card should be the norm for Ibushi.

Next up was the 6-Man Title gauntlet match, which was slightly better than its WK counterpart but ultimately entertaining without being terribly memorable.  I was pleasantly wrong about the straps changing hands yet again, as LIJ defeated Taguchi Japan in the final fall to retain.  Maybe LIJ can be the team that actually makes this championship meaningful.
The show really got underway with the third match, RPG Vice vs. The Young Bucks for the Jr. Tag belts.  This was easily superior to the WK match (which itself was quite good), as Matt and Nick showed a much more prominent mean streak than they have in the past.  In addition to their flashy heel moves they sprinkled some ruthlessness into the match, telling a much stronger story.  The Bucks captured their sixth title in one of the better Jr. Tag matches in recent memory.

The other set of tag belts was up next, as War Machine faced former champs Guerillas of Destiny in a blazing eleven-minute brawl.  Everyone looked pretty great here and the action was furious.  I probably wouldn't have taken the belts off Hanson & Rowe yet, but I will say GoD have improved leaps and bounds over the past year and their new ring gear makes them come across as much bigger stars.

The middle slot went to Cody Rhodes and Michael Elgin, who put together a nice little Cody showcase.  They meshed well together and I liked this match better than Cody-Juice from January.  While no five-star classic, this match showed Cody can begin to hang with the NJPW big boys.  He still needs to deliver in a 20-minute format to fully convince me but he's definitely on track.  We'll see how he does at the G1 Special against Okada.

The match that came dangerously close to stealing the show was the Jr. Heavyweight clash;  Hiromu Takahashi and Kushida built on their previous two bouts and delivered an absolutely stupendous hybrid of Jr. action and pure fighting.  These two started out simply beating the shit out of each other and gradually worked in some of their patented crowd-pleasing offense.  The live audience was red hot for most of this, deservedly so.  After 19 minutes of incredible, innovative action, a hyper-aggressive Kushida finally won back the Title with the Hoverboard Lock.  This is one of the best Jr. Title matches I've ever seen. 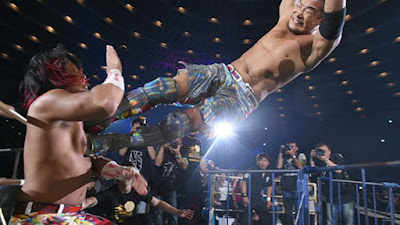 The NEVER Openweight Title match was a wild, unruly affair with Suzuki and Goto hitting each other with stiff offense while their respective squads outside the ring brawled for most of the bout.  Suzuki oddly got into an altercation with Jushin Liger at the commentators table.  Not sure where that's going, but Liger challenging for the NEVER belt would certainly be interesting.  Yoshi-Hashi seems more likely at this point though.  The finish saw Goto hit the GTR only for Taichi to pull the referee out of the ring mid-count and then hit Goto with a chair before Suzuki nailed the Gotch Piledriver to retain.  A fun match but nowhere near the quality of Shibata-Goto from January.

The semi-main event was the Tanahashi-Naito rematch, and these guys told a great story with Naito mercilessly attacking Tanahashi's injured arm.  This match was a lot grittier than their January bout and the crowd was almost unanimously pro-Tana.  Naito kicked out after a late High Fly Flow but Tana locked in a Texas Cloverleaf and shockingly got the submission.  This was a pretty great 25-minute match, on par with, but for me just slightly below, their WrestleKingdom bout.  Still this was easily worth **** and another excellent showing from these two.  Since Naito all but destroyed the Intercontinental belt I have to think NJPW will be introducing a brand new strap (Christ I hope so, that thing looks like it was hit by a truck and then pissed on). 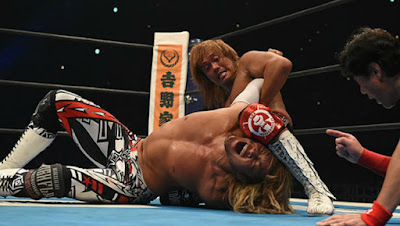 And finally there was the colossal Okada-Omega rematch.  First off, I should disclose that I accidentally found out the result before I watched the match.  I wish I hadn't, but them's the breaks.  That said, this was an absolutely epic example of in-ring storytelling that played out as a fitting sequel to one of the most remarkable matches of all time while also serving as the middle episode of a trilogy.  These two added numerous callbacks to the first match (the Dragon superplex and the backdrop through the table) while conveying that each man knew what the other was thinking at nearly every turn.  As the bout wore on both men became nearly incapacitated, ratcheting up the drama and further showing how evenly matched they are.  At one point the Bullet Club all appeared at ringside and Cody teased throwing in the towel for a barely conscious Omega before The Young Bucks talked him off the ledge.  Interesting choice for the heel to get that kind of sympathy moment, but it worked; the crowd was unglued for most of the last fifteen minutes.  The battle ended when Okada hit a fifth Rainmaker but was too exhausted to make the cover in time for the match ending bell.  After sixty minutes both men lay prone and broken, capping off what has to be the best 60-minute Broadway I've ever seen. 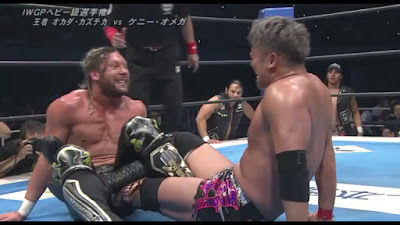 I said earlier that this match was to the first as The Godfather 2 was to The Godfather.  In both cases the first installment was essentially perfect in my eyes, while the second was an unequivocally brilliant continuation of the story.  I consider Okada-Omega 1 just a shade better than 2, but both matches were herculean efforts that will almost certainly live on as essential examples of the genre.

As for the inevitable third go-round, I think it would be a huge mistake not to wait until WrestleKingdom 12.  This match is too big for any other show.  I could see it taking place at King of Pro-Wrestling, but then what would they have for Tokyo Dome next year?  No, Kenny has to repeat at G1 to earn his third title shot.  Either that or someone else wins G1 but Kenny challenges for the certificate and wins.  WrestleKingdom 12 needs to be the place where this feud gets settled.

So which show was better overall?  I have to give the slightest of nods to WrestleKingdom.  The Dominion undercard up through the Jr. Heavyweight match was better, but the last three WK matches were the deciding factor for me.  Regardless, this was another brilliant showing from a company at the top of its game and I can't see WWE or anyone else coming close to a PPV this good anytime soon.

Best Match: Kazuchika Okada vs. Kenny Omega
Worst Match: The opening 8-man by default.  A fun little trifle of an opener was the worst thing on the show.  Think about that for a second.
What I'd Change: What more could I possibly want?
Most Disappointing Match: Nothing on this show disappointed
Most Pleasant Surprise: How close the Jrs. match came to stealing the show
Overall Rating: 9.5/10