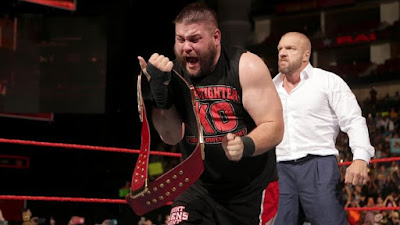 Over the past week on RAW, due to inaugural Universal Champion Finn Balor's untimely injury, WWE was forced to book a do-over.  We had the first round of an eight-man tournament where the winners faced off in a four-way elimination match to crown the second Champion.  Our options were the obvious choice of Seth Rollins (a former WWE Champ who carried the WWE brand for most of last year), Roman Reigns (the company favorite whom they're still trying to push as a top babyface despite fan revulsion), Kevin Owens (a fantastic upper echelon heel seemingly ready for breakout status), and Big Cass (Huh??).

I was fully expecting WWE to go the safe route and book a three-month Reigns vs. Rollins feud, with Reigns either chasing Rollins or Reigns winning and then maybe doing a gradual double-turn.  But WWE wisely realized they needed something big to happen here, and that's what we got.  Triple H made a surprise return, helping Rollins eliminate Reigns and then just as we were all expecting Owens to meet the same fate, BOOM!  Triple H double-crossed his old protege, allowing Kevin Owens to win the Universal Title.  Now this I like!

Word is that prior to Balor's injury, Owens was lined up to be his first challenger.  We'd have been treated to some classic bouts, as Balor vs. Owens yielded two excellent NXT Title matches in 2015.  But now it appears Rollins will turn babyface (finally!) and take Balor's place in this feud, albeit as a challenger.  I said months ago when Rollins came back that he should be the avenging angel, back to reclaim the Championship he never lost.  Now finally we seem to be getting that scenario.

I assume Reigns will move back down the card to finish his business with Rusev and maybe win the US Title (This wouldn't be the worst thing in the world, having another WrestleMania headliner/former WWE Champ as the US Champ), while Owens and Rollins feud over RAW's top belt.  Rollins will now be working against Triple H's handpicked Champion and I have to think will eventually face Hunter himself at WrestleMania 33.  We could also see Owens' buddy Chris Jericho added to the title mix, creating tension within JeriKO.  All of those prospects are exciting and fresh, and if WWE doesn't screw this up (Big IF), we could be in for an intriguing fall season for a change (Historically the fall tends to be creatively the worst few months on WWE's calendar).

Between Owens vs. Rollins, Ambrose vs. Styles, Orton vs. Wyatt, Miz vs. Bryan's surrogate, and Charlotte vs. Bayley, there's a lot to keep us entertained through this new era of excessive PPVs.  It's a rarity during these brand splits for both shows to actually present something worth seeing, but WWE may be about to accomplish that feat for the first time.

What they need to do with Owens, to avoid him falling into the "Hunter's Bitch" designation like Rollins and Orton did previously, is have him fully enlist Hunter's help even when it's not necessary.  Rollins and Orton were determined to make it on their own but The Authority kept having to bail them out.  Owens should be clearly portrayed as good enough to do his own dirty work, but entitled enough that he's always counting on Hunter to get him out of sticky situations.  Then he should be indignant when Hunter doesn't come through.  That way it's more like Hunter is acting as Owens' right-hand man instead of the opposite.  And Owens is so good at being the trash-talking heel who thinks he'll always be able to back it up, this should work splendidly.  I like where this could be going.

They should keep that belt on Owens until Balor returns and set up a big match at 'Mania; if they truly are all-in on Balor there's no better way to re-coronate him.

It's a little early to fully celebrate, given WWE's track record, but contrary to my expectations the brand split is kinda sorta goin' okay so far....
Posted by Justin Enuffa Ballard at 12:58 PM