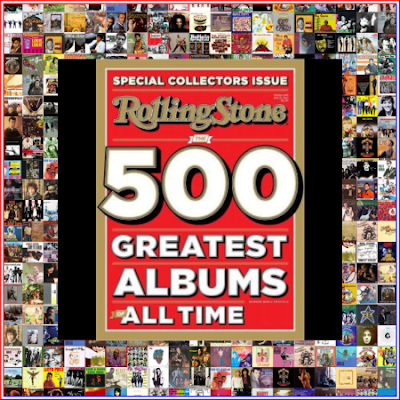 We carry on with our bashing of Rolling Stone’s list of the 500 Greatest Albums of All Time by tackling entries 51-100. Check out my thoughts on the Top 50 of the list here.

Overall I like this group a lot, however it does give us more unnecessary greatest hits compilations which is just infuriating. If you’re going to go with a Ray Charles album at #54 it’s hands down Modern Sounds in Country and Western Music. It was a game changer and raised the genre of country music to extraordinary heights. You can take your pick at what Sly and the Family Stone album should be at #61 instead of their Greatest Hits. We haven’t even gotten through the Top 100 of this list and this “greatest hits issue” is already a problem.

Alright, I like Bridge Over Troubled Water at #51. It was such a great album by a fractured duo that it showed through even in the album’s title. As much trouble that persisted in the songs, Simon and Garfunkel expressed it in the most peaceful and emotional way.

Meet The Beatles! is in the perfect spot also. It’s such an influential album to many artists and fans alike but its placement doesn’t feel forced.

Billy Joel’s The Stranger coming in at #70 is also a good thing to see considering he was never a favorite among critics during this period. That album is fantastic and could be confused with a greatest hits album considering how many well-known classic songs are on there. It’s also my favorite album to play on vinyl, just has a great feel to it.

The first group without any greatest hits! This group has some of my all-time favorite albums in it, starting with Paul Simon’s Graceland. It’s for sure a Top 100 album and is still an incredible listen. Simon is one of those artists, for me, where I’ve never heard a bad song from him. Billy Joel is another one where I feel that way.

Neil Young’s After The Gold Rush is somewhat of a surprise for me. For one, I don’t think it’s a better album than Harvest but that’s nitpicking. Also, it wasn’t a well-received album when it came out. People have warmed up to it over time but it’s a little odd that they’ve warmed up to it enough to make it a Top 100 album of all time.

Led Zeppelin’s “2” clocks in at #79 which I appreciate since it’s my favorite Zeppelin album.

Aretha Franklin makes her presence known by taking back-to-back spots #84 and #85. Lady Soul is, in my opinion, a gift from the music gods. That album soars. My favorite Aretha album.

Born in the U.S.A. follows her at #86 being one of the best-selling albums of the 80s. (It might even be THE best selling album, not sure.) That may be the reason it’s in the Top 100. In my opinion, Darkness on the Edge of Town was a much better album in terms of songs, songwriting and theme. I love The Boss, so whatever.

Dusty Springfield’s album Dusty In Memphis is a great selection. That album floors me every time I listen to it. Her voice is just divine and I never get tired of listening to her.

Then, it’s Mr. Wonder and oh my lord is he ever a wonder with Talking Book. It’s an album that is so rich and multi-layered that every time you listen to it you can hear something new that you never realized was there before. It was an ambitious album and he nailed it perfectly. It’s not my favorite album of his (Songs In The Key of Life) but it’s still an album I love and appreciate.

The final 10 gives us two greatest hits albums and they’re actually pretty understandable considering how short Buddy Holly and Hank Williams’ careers were. Holly had three studio albums (one with The Crickets and the other 2 solo) before he died in 1959 and Williams had two before passing away in 1953. Both were proficient songwriters and there were a lot of unreleased songs discovered only after each passed away. Considering how influential they both were in their respective genres, I don’t mind these greatest hits on this list.

Miles Davis’ Bitches Brew should be in the forties. That’s a Top 50 album of all time. When I first heard it I didn’t like it, but after giving it a few more listens it won me over to the point where I never wanted to turn it off. Also, Dogfish Head’s tribute beer for this album is also really good too.

When I first saw Dylan’s Freewheelin’ Bob Dylan at #97 I thought it was too low. However, after looking where his albums ranked in the Top 50 I realized that I liked where it was at and am glad it squeezed into the Top 100.


There you have it! Not too many surprises or disagreements overall but the fun is just beginning now that we’re through the Top 100. Can’t wait to see what bullshit Rolling Stone has in store for us! Stay tuned for Part 3!