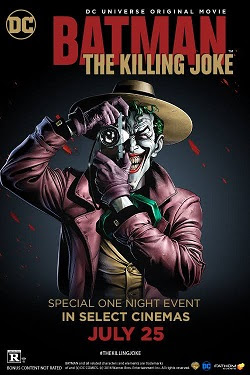 One of the most iconic of Batman comic book stories, The Killing Joke is seen as the definitive origin story of the Dark Knight’s most feared nemesis, the Joker. The story of a poor, sad sack comedian with a pregnant wife coerced into a robbery, it shows how one really bad day can make a man go insane. It’s a masterfully woven tale that is almost impossible to screw up if you adapt it to the screen.

DC screwed up this adaptation to the screen. Masterfully. The gist of the story is (SPOILER ALERT) the Joker goes nuts after his wife is accidently killed. Years later, he wants to prove that anyone can go nuts. He goes to Barbara Gordon’s (the Commissioner's daughter) house. He shoots her in the spine, paralyzing her, and kidnaps the Commissioner. But Jim Gordon’s resolve holds and Batman once again saves the day. The story is a tad short, so they had to pad it a little.

So what did they add to this adaptation? They wrote a roughly 30-minute prologue to the main story, about Barbara and her adventures as Batgirl. It’s a completely subpar Batman story about a generic thug and gangsters with guns. It seems like it woulda been a filler episode on the old Batman Animated Series and here they are adding it to a feature-length adaptation of one of the most famous stories in the Dark Knight detective’s history.

Not only that, but they also screw up Barbara’s portrayal completely. Complaints about the original comic stem from the fact that Babs is used as the weak female motivation to get the guys' plots moving around. So the producers of this flick wanted to add to her story to make her a more fully-realized character. No problem there. But how they do it is completely wrong. I’ve always looked at Batman as a teacher to Batgirl. A mentor of sorts. But not here. Oh no. In this, they use Babs as a sort of lovelorn teenage girl. She’s got a major crush on Batman that he doesn’t reciprocate. When they get into an argument concerning Batgirl’s methods on the case after chasing bad guys on a roof, it becomes a shouting match, then it gets physical, with the kicking and the punching. And then they bone. Seriously. In the middle of night, on top of this roof, after fighting each other, Batgirl jumps onto Batman, kisses him, takes her top off, and he gives her the ol’ batarang. It’s LUDICROUS. It’s so out of character with how this relationship is traditionally portrayed as to be laughable. It completely took me out of the story. I laughed out loud at this development.

Shortly after they do the naked Batdance, Babs says she can’t do this with Batman anymore and quits as Batgirl. So lemme get this straight. To fix the weak characterization of Batgirl in the original piece, they portray Barbara as a girl with a crush who just wants to bang her Batman and then when she does, she goes all teen girl and can’t handle it so she stops hanging out with him? It does the character a worse disservice then the few pages in which she appears in the original work. It’s a terrible narrative device.

They then proceed into The Killing Joke story proper. It’s all done well. Kevin Conroy is great as Batman, as usual. As is Mark Hamill, back again as the Joker. The problem is some of the segments that play out fine on paper don’t translate as well to film. There’s a scene in a carnival where the Commish is cornered by all kinds of freaks while the Joker sings maniacally to him. It’s great in the comic, thinking in your head how the Joker is yelling and screaming these insane lyrics at him. On film, it’s mundane and damn near silly. It doesn’t work as well. Being told that this is what’s going to make him insane doesn’t live up to my imagination of how it all sounded and felt in my head. And the final scene does not translate at all. The Joker tells Batman a joke, and they laugh it off. But you don’t really get any closure. It’s creepy. You need the ambiguity of the ending on paper. In this cartoon version, it’s just weird sounding. They laugh and laugh and it goes to credits. It’s too abrupt and you can’t linger on what it means.

Overall, I’d say this is a miss. The production values are good and the voice talent is top notch. But the prologue is laughably bad. And I don’t think this story plays as well on a TV as it does in your mind. 'Tis a shame; I had high hopes for this one, as it’s one of my favorite Batman tales.
Posted by Justin Enuffa Ballard at 11:01 AM