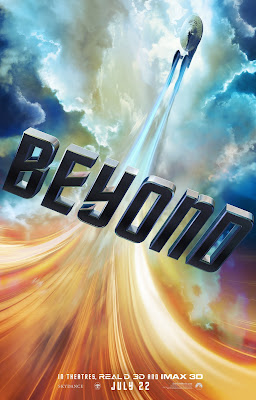 Captain Kirk, Spock, Bones and the rest are all back again for the thirteenth Star Trek movie, and the third in this action-packed reboot series. As my colleague Justin and I have discussed before, these movies have been technically sound and overall enjoyable, however they’re lacking the strong characterization of the previous films. They’ve got their big action scenes and giant special effects, but they haven’t quite given us the versions of the iconic characters we've come to know and love.

That said, they make huge strides in this new installment towards fixing that gripe. This movie has easily the best and most heartfelt interactions of these iconic characters yet in this series. Kirk and the gang finally all feel like friends, instead of the audience just understanding that they are supposed to be. They speak warmly to each other, there’s real camaraderie between them all and the scenes with Spock and Bones on their journey alone feel exactly how two friends would interact as they’re being put in a tough situation.

It’s a good thing the characters are finally real people because this particular Trek is just…meh. The Trekkers are in their third year of their five-year mission, and they come upon an escape pod. The survivor tells them that the ship, filled with her people is trapped and needs help. Which turns into an ambush. The Enterprise is attacked and destroyed, stranding its crew on the nearby planet below. The crew is separated into groups and must find each other while simultaneously fighting the bad guy that caused the ambush and destruction of their ship.

It’s a very pedestrian plot device. Just chucking the crew on a forest planet doesn’t get my juices flowing. It seems more like an episode of one of the TV shows than a big-budget Trek movie. It’s a standard plot device: separate your main characters into little groups and have them meet up with each other just in time to save the day. It was terribly predictable in that sense.

The bad guy, Krall, played by Idris Elba, is totally underwhelming. He’s got some weird voice he’s doing and he’s buried under piles of makeup. When you got a guy like Elba in your cast, why hide him? I felt no sense of dread from the guy. Not a very good villain.

And the villain’s plan…it’s been done a million times before. Christ, Star Trek: Generations AND Wrath of Khan have essentially the same bad guy motivation. There’s some changes but it’s very similar. Totally lazy in the bad guy department.


As with the previous two films in this series, the effects are awesome-looking. And the action is front and center all over this movie, thanks in large part to director Justin Lin, of The Fast and the Furious franchise. He amps up the action and even includes a goddamn motorcycle chase. IN SPACE. It’s not as silly as it sounds. But it’s silly.

This is an okay Trek movie at best. After the epic new reboot and the second one at least incorporating THE iconic villain of the franchise, this third entry seems to take the foot off the gas. It’s a forgettable, likable film. It is safe to say this one does not enter into the pantheon of great Trek films. Adding excellent characterization to these movies finally adds a huge layer of enjoyment to them. 'Tis a shame the rest of the flick was so mediocre.