The second annual Brooklyn NXT special is in the books.  Let's see what went down....


Yet another banner showing for the NXT brand, Brooklyn II solidified the tradition of NXT setting the tone for SummerSlam weekend and keeping the main roster on its toes.  For the second straight year, NXT sold out the Barclays Center and unleashed a barrage of good-to-great matches, debuted some new faces, and made history.

The show opened with veteran Austin Aries taking on the fun-loving No Way Jose, who decided to get a little serious after weeks of being bullied by A-Double.  Aries' technique matched up well with Jose's unorthodox style, and the two put on a strong 12-minute opener that ended with Aries tapping Jose with the Last Chancery.  A good showing for Aries and a nice first step in the evolution of Jose's character.

Next up was the debut match for Ember Moon, whose was presented with an intimidating air of mystique, complete with unnerving red contact lenses and a vampiric look.  Her opponent Billie Kay surprisingly got most of the offense, but the story here was Ember's resiliency, as she regained control and finished Billie off with a spectacular twisting Stunner off the top rope.  Great finisher, decent little match. 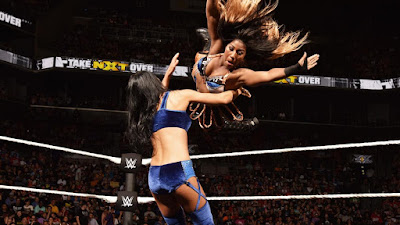 The final undercard bout was the televised in-ring debut of former TNA Champion Bobby Roode, who absolutely has WWE's music production team to thank for much of his instant overness.  That entrance theme is super hooky and has a heavy Queen influence.  Two days later and it's still stuck in my head.  Roode's opponent, Andrade Almas, is a lot of fun to watch in the ring, with innovative, quirky offense, but has yet to define who his character is supposed to be.  Roode on the other hand owns the ring character-wise but his offense is a bit lacking.  After a solid nine minutes of action Roode finished Almas with a banal pumphandle slam.  Surely he can come up with a better finisher than that.

The show kicked into high gear with the final three bouts, all of them for championships.  The Revival put on an absolute tag team clinic against Tomasso Ciampa and Johnny Gargano.  The bout started pretty methodical but dazzled in the second half, with insane counterwrestling and near-falls.  The crowd bought into every two-count and the last five minutes contained half a dozen believable false finishes.  At the end of the bout Dash Wilder hobbled Gargano with a chopblock, allowing Scott Dawson to submit him with a reverse figure four.  Helluva tag match, and yet another excellent showing from The Revival. 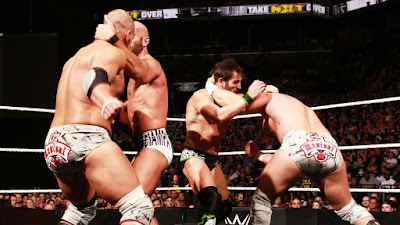 While the Tag Title match may have been the best match in terms of pure action, the Women's Title match eclipsed it for storytelling and emotion.  The usually cheerful Bayley was all business and exuded a sense of trepidation against the woman who defeated her in Dallas, Asuka.  The NXT Women's Champ, conversely, was overly cocky and adopted the role of sadistic heel, toying with Bayley for much of the match.  Bayley defiantly incited more violence from Asuka, refusing to be dominated.  Toward the end of the bout, Bayley escaped two Asuka Locks and shook off a kick to the head before Asuka leveled her with two more kicks for the win.  Considering we all knew Bayley was main roster-bound, this match had an amazing level of suspense; Bayley simply would not stay down, while the late moments of the match saw Asuka begin to seem desperate, her undefeated streak in real danger for the first time since her debut.  Another in a long line of stupendous NXT women's matches. 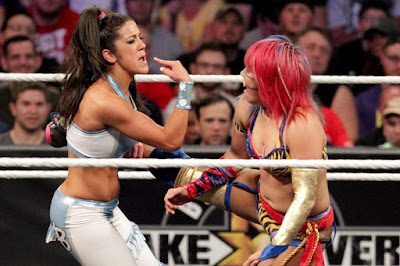 The main event pitted NXT Champion Samoa Joe vs. Shinsuke Nakamura, in probably my most anticipated dream match since Joe vs. Angle a decade ago (or Nak vs. AJ I suppose).  Like that match, this didn't quite live up to my expectations, and that's taking nothing away from this being a damn fine main event.  It just wasn't the transcendent masterpiece I was hoping for.  The first few minutes of jockeying for position was quite captivating, and then Joe took over on offense for a very long time.  This slowed the match down quite a bit and it wasn't until the final third that the match really kicked into high gear.  As methodical controlling heel offense goes, Joe's is among the more interesting to watch because of all the submissions and variations, but given the mutual hatred of these two I felt the first half of the match needed to be much more ferocious.  It almost seemed like Joe and Nak were being too civilized in the early going, and when the match slowed down it felt premature.  But the final act was first-rate and raised my overall rating by a full star.  Nak kicked out of the Muscle Buster and delivered three Kinshasas to capture the NXT Championship.  It's safe to say Japanese wrestling has fully "arrived" in the US, as accomplished Japanese stars now control both NXT singles Championships.  This was a huge moment to cap off a very strong night of wrestling. 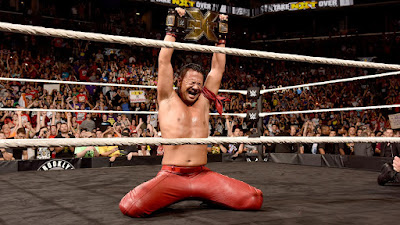 Overall Brooklyn II met my very high expectations; the undercard matches were all perfectly entertaining, and all three Title matches were quite worthy of their spot.  For me nothing exceeded ****, and I think Joe and Nakamura especially have a ****1/2 rematch in them.  But this was yet another NXT special whose two-plus-hour running time flew by.  Main roster Creative seems to have lost sight of the "less is more" concept, pummelling viewers with four-hour PPVs and three-hour RAWs, but the NXT product always seems to deliver just the right quantity, with a huge emphasis on quality.

Best Match: The three Championship matches were all good for very different reasons, and on balance I think my favorite was Asuka-Bayley.
Worst Match: Bobby Roode vs. Andrade Almas, but this wasn't bad
What I'd Change: Just the early pace of the main event.  It should've been a bit more furious before settling into the heel control segment.
Most Disappointing Match: Joe vs. Nakamura, just because it didn't quite meet my absurdly high expectations.  But it's still a ***3/4 match.
Most Pleasant Surprise: Everything else was as expected
Overall Rating: 8.5/10


The End
Posted by Justin Enuffa Ballard at 9:15 AM