WWE SummerSlam: The Best Main Roster PPV of 2016 (by default)

Well it was quite a wrestling weekend to say the least.  Between the mostly excellent NXT TakeOver special (a full review will be forthcoming) and last night's SummerSlam (including pre-show matches) WWE gave us roughly 8.5 hours of wrestling.  Now, I'm as big a wrestling fan as anyone I know (Trust me, most people I know think I'm batshit insane because of how much I like this stuff), but 8.5 hours is a lot to ask anyone to commit to.

One thing that's so nice about the NXT specials is they're never longer than 150 minutes or so.  They never overstay their welcome.  But main roster PPVs these days aren't beholden to traditional PPV time constraints, and thus even the B-shows are starting to run 3.5 hours, while WrestleMania and Summerslam are each over four, plus two hours of preshow content.  By the end of the proper PPV you feel like you've been watching for days and the main event suffers because of it.  That's counterintuitive by anyone's standards.

So how was SummerSlam?  That's honestly a hard question to answer, given what a mixed bag it was.  This lineup was the most stacked in many years, with no fewer than four potential Match of the Year candidates (on paper anyway), plus a good amount of variety in the undercard.  Had the execution been stronger we'd likely be including SummerSlam 2016 in the "Greatest SummerSlam Ever" conversation.  But a few things kept it from reaching that level.  First though, let's talk about what did work.

Let me preface this by saying that there were no bad matches on this show.  I didn't dislike anything except the one match that turned into a non-match.

I would've liked to see Cesaro vs. Sheamus actually open the PPV, since these two always work well together and this was no exception.  It wasn't anything amazing but in the first slot this would've fit perfectly.  Sheamus won the first match of the series as I figured, and this was a fitting way to kick off the series (and should've kicked off the proper PPV). 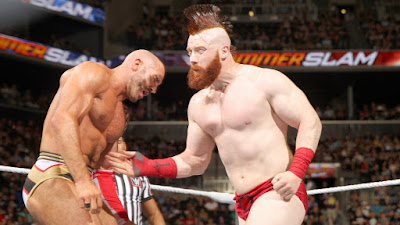 The actual opening match, JeriKO vs. Enzo & Cass, was just fine but it was very strange to see Kevin Owens, seemingly on the verge of breakout status, relegated to an opening tag match (Though nowhere near as infuriating as Sami Zayn's position in a preshow tag match).  I figured this was all to set up a Jericho-Owens feud, but it looks like JeriKO could be destined for the Tag straps at some point soon.  I guess I'm okay with that.  It would certainly be a feather in Owens' cap to dethrone The New Day.  This was fine.

Sasha Banks vs. Charlotte was the first of probably three instances where I said aloud, "This match is happening already??"  Putting this match so early on the card seemed to undermine the importance of the Women's Title and the company's new outlook on the division.  That said, this was a fine contest that suffered from a few sloppy moments and an over-reliance on big risks.  Of the two main roster Sasha-Charlotte matches thus far I preferred the one on RAW.  Also a four-week Sasha Title run strikes me as very anti-climactic - I know Sasha's taking a month off to heal some nagging injuries but it drives me nuts when a wrestler's first Title run is so short.  That's become all too common in recent years.  Anyway, this was a splendid match all things considered, and I imagine we'll see the rubber match at Survivor Series. 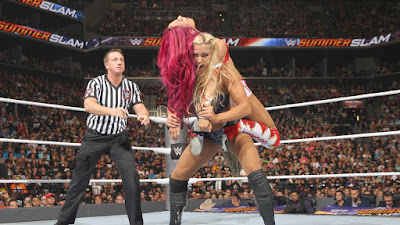 The next standout (and the second match about which I intoned "Already??!?") was AJ Styles vs. John Cena.  Holy lord, what a match.  There is zero doubt that AJ Styles has adapted seamlessly to his WWE surroundings, and it's fantastic that the company can see it and seems committed to a serious push.  Where Cena-Styles I at Money in the Bank felt a bit tentative and had timing issues, this match flowed beautifully, all the big moves looked effortless, and these two meshed like they'd been wrestling each other for years.  I was very glad this match got the most time; this came off like a major main event and probably should've closed the show.  AJ going over clean was absolutely the right move and WWE needs to make him the World Champion on Smackdown within the next couple months; AJ vs. Ambrose will be a great top feud to carry that show through the fall season.  As for John Cena, this guy has become Mr. SummerSlam for me.  He's had 13 matches at the summer spectacular, eight of which have stolen the show in my opinion (vs. Jericho in 2005, vs. Edge in 2006, vs. Orton in 2007, WWE vs. Nexus in 2010, vs. Punk/Big Show in 2012, vs. Bryan in 2013, vs. Rollins last year, vs. Styles this year).  Granted some of the credit in these matchups needs to go to his various opponents, but it's no coincidence that Cena's had so many great showings with such a diverse cast of characters.  John Cena is one of the best big match wrestlers in the business.  No question.  This was the main roster's Match of the Year thus far. 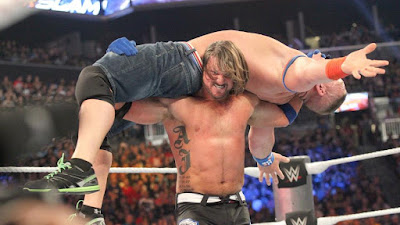 Sadly everything after AJ vs. Cena was doomed to a certain extent.  There was simply no way any other match was going to follow that.  But a few managed to deliver the goods.

Dean Ambrose vs. Dolph Ziggler suffered from a pretty disinterested crowd, as Ziggler's credibility has been so damaged no one bought him as a viable threat.  Listen to the silence for all the near-falls in this match.  From a mechanical standpoint there was nothing wrong with the bout at all - it was an extremely solid showing from both guys and in front of an engaged crowd this probably would've been in the neighborhood of ****.  There just simply wasn't enough suspense over Ambrose retaining and thus no emotional stake.  On balance it was still ***1/2. 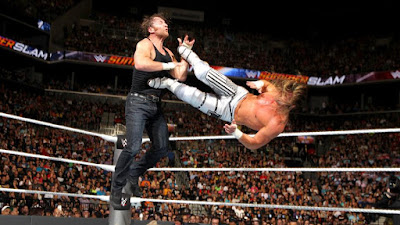 The other real standout was, not surprisingly, Seth Rollins vs. Finn Balor for the new Universal Championship.  Now, much has been said about the Brooklyn crowd and their harping on the new belt design.  Their focus on such an unimportant part of the proceeding definitely hurt the match a little, and it almost certainly would've been prudent for WWE to reveal the design on RAW last week instead of building up the suspense only to present an exact copy of the existing WWE belt but with a red strap (which our own Dan Moore says "looks like it's made of Fruit Roll-Ups").  If the Universal Title is supposed to be a bigger deal than the World Title, why wasn't it designed with a greater sense of splendor?  Anyway, unveiling it last week would've gotten the fan backlash out of the way so the Brooklyn crowd could've lent this match the heat it needed.  That said, this was definitely the second or third-best match of the night (I need to rewatch everything to decide).  Balor and Rollins worked really hard and delivered some excellently crisp action.  I'm not sure how I feel about the unproven (on the main roster) Balor already being given the top Title.  Seems like an underhanded, indecisive win for Rollins was the way to go, allowing Balor to chase the belt (and thus getting the audience solidly behind him).  I imagine we'll get a rematch at Clash of Champions, which will hopefully headline that show.  I'm a big Balor fan, so I just hope hotshotting the Title onto him won't lead to fan disinterest in two months. 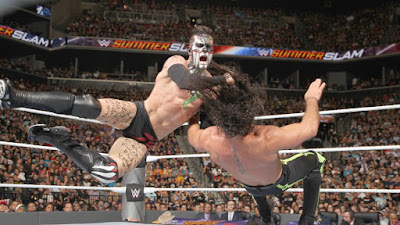 The final positive about this show, albeit a narrow one, was the main event.  I said going into this show that The Viper should be too crafty to fall into the Suplex City trap, but WWE recycled the same ol' Brock Lesnar formula.  Lesnar dominated the first half of this match, hitting numerous German suplexes and more or less repeating the exact match he had with Cena two years ago.  Orton came back outside the ring, hitting the RKO on the announce table, followed by a draping DDT and another RKO inside the ring for a near-fall no one bought into.  But then Lesnar jumped on top of Orton and ripped his forehead open with a hardway elbow.  And then the match just ended.  The doctors tried to stop Orton's bleeding, Lesnar pummeled him again, and the referee stopped the match and awarded Lesnar the win by TKO.  Wait, TKO is a thing in pro wrestling?  Since the fuck when???  What should've happened was Orton giving one last effort to turn the match around only for Lesnar to hit another F5 for the win.  The visual of a bloody Orton landing an RKO Outta Nowhere but being too exhausted to go for a cover would've been epic.  Or even better, this should've actually been a back-and-forth match where Orton held his own for most of it before Lesnar split him open with an elbow and lowered the boom.

Look, I can appreciate the unpredictable finish, but if that's how the match was gonna go after less than twelve minutes, this should not have closed the show.  And it most certainly shouldn't have closed the show immediately after Roman Reigns and Rusev just had a non-match brawl with no winner.  In what universe does it make sense to have the final two matches on a SummerSlam PPV both end in non-finishes??  This was baffling and only served to undermine what was a pretty damn good PPV for the first three hours.  Much like WrestleMania earlier this year, SummerSlam limped across the finish line when it needed to surge in the final hour. 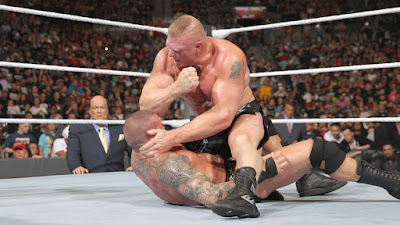 This show had a very weird "every other" pattern to it, meaning every other match was good or great.  The rest was filler.  Aside from the opening tag match, the rest of the B stuff was forgettable.  Miz vs. Crews was short and quick but felt like a RAW match (I was glad to see Miz retain, as Crews isn't ready yet).  The New Day vs. The Club started out ok but quickly degenerated into a comedy match with Jon Stewart getting involved and Big E returning from injury (If Big E wasn't supposed to be there why was he wearing his wrestling gear and why did they play his music??).  The Smackdown six-woman tag was technically fine but the crowd was absolutely dead - this probably should've only gone about eight minutes or so.  And of course the "death spot" went to Reigns vs. Rusev, which was simply a feud-advancing angle.

So you're basically looking at six good matches out of ten, plus a strong Preshow bout that should've been on the main card.  By no means a bad SummerSlam; on the contrary, this was a very strong overall show with a lot to like.  It was almost certainly the best main roster show of 2016 so far, but it was only very good when it should've been truly great.  The placement of the various matches was confounding; I still maintain that a great PPV should build to a peak rather than bring everyone down in between important matches.  The booking of the last two bouts was appalling; why in the world would you end the PPV on such an unsatisfying note?

Overall this show was probably a solid 8/10.  I'll need to rewatch it for some perspective, but that's where it falls after one viewing.  AJ vs. Cena, Sasha vs. Charlotte, Balor vs. Rollins and Ambrose vs. Ziggler provided more than enough good-to-great action for this to be an easy thumbs up.  NXT TakeOver was the more consistently satisfying show this weekend, but the main roster delivered the best single match.
Posted by Justin Enuffa Ballard at 11:34 AM