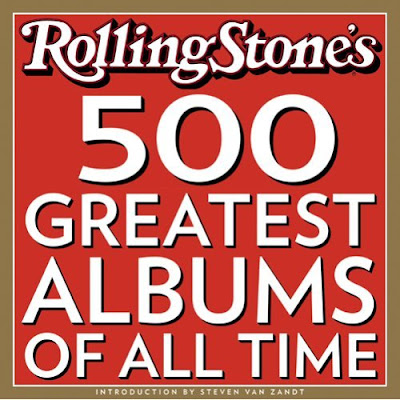 We’re going to do things a little different and start from #1-50 because it’s probably the most predictable section. They’ve done these kind of lists for a long time now that you could probably guess the top spots with relative ease so the suspense is pretty lacking.

Please...stop me if you’ve seen this before.

Barely anyone is going to argue with the Top 20 and if they do they’re only nitpicking placement. All of these albums had a historical and artistic impact on popular music at the time of their release. Whether they were appreciated at the time of their release is another issue but for the most part, it’s an easy Top 20 to digest. There’s nothing outrageous about it. Maybe, and I mean maaaaaaybe London Calling at #8 is a little high, especially over Blonde On Blonde, but again...nitpicking.

So this is where the bullshit starts. A greatest hits compilation is on this list? Really? Chuck Berry needs a greatest hits album that was released in 1982 to justify placement on this list? This is an obvious force by RS to get Chuck Berry high on the list and in all fairness, The Great Twenty Eight is an incredible compilation. However, it’s a little unfair to rank compilations next to original bodies of work that were crafted and painstakingly put together. Also, it’s completely unnecessary too. Berry’s first album is a monster that could justify it’s own inclusion instead of resorting to a greatest hits album.

Another unnecessary inclusion is Muddy Waters’ The Anthology. It’s hard to justify this album being ranked so high on this list when Electric Mud was so highly controversial yet so influential to psychedelic rock bands at the time. It also had rhythmic tendencies that not only influenced hip hop but pre-dated it by at least 10 years. Another forced entry by RS.

I also hold a similar reservation with live albums, specifically James Brown’s Live At The Apollo. It’s an incredible live album and performance, no question, but isn’t it essentially a various collection of songs strung together from an artist’s catalogue, just like a greatest hits compilation, rather than an album that was painstakingly crafted from top to bottom, beginning to end? I do understand how people view a live performance as one body of work so it could qualify using that standard. We could rephrase the question like this; is there a difference between live albums and studio albums? Could make for a great discussion (For the record: James Brown’s Live At The Apollo is one of, if not THE greatest live album ever). Also, if we’re including live albums, how come barely any appear on previous lists? There just seems to be a little shakiness to me in RS’s qualifications.

Love’s album Forever Changes at #40 is a little bit of a surprise to me. I never really heard of this album or band until this list.  Not that I’m some expert, but being that I am a big music fan who's listened to a lot of albums and have researched most eras of popular music, I would like to think that I'd have at least heard of an album ranked at #40 all time. Also, in all the lists various media outlets put out, I haven’t seen this one listed. However, one of the great things about lists like these is that it can introduce you to new music and I will take full advantage of the opportunity to explore this album. So, at this moment in time, I’ll abstain from judging this album and its ranking.

Nevermind The Bollocks seems a little low for my liking considering what it sparked and how it went about it. Not only was punk born but all of its sub genres as well. Have it replace Chuck Berry’s The Great Twenty Eight at #21 and I’m good.

Bob Marley’s Legend is another one that you can add to the greatest hits compilation discussion. It’s one of the best selling greatest hits albums of all time but still, it shouldn’t be included.

John Coltrane’s A Love Supreme is one of my favorite jazz albums of all time. It’s basically Coltrane saying “fuck it” and releasing a massive violent stream of love, war, and appreciation. It’s too good. Along with Miles’ Kind of Blue (ranked #12 on this list), this is a perfect starter album if you’re looking to get into jazz. Well, maybe it’s just a must hear.

Public Enemy’s It Takes A Nation Of Millions To Hold Us Back is the first hip hop album to appear on this list and it’s pretty clear why. This album took the smooth rhymes that built hip hop and turned it up to eleven, not really paying any attention to who it offended. It was meant to burn bridges while simultaneously building them in a different location. This was hip hop’s version of punk. The album still scares the shit out of me.


There’s your Top 50! So far it’s pretty standard fare with very few surprises. Not too much to bitch and moan about. The one album that was absent that stuck out to me was Aretha Franklin’s Lady Soul. For me, that’s a Top 50 of all time kind of album but we’ll see where it lands.

As we dig deeper into this list the surprises will start to come fast and furious so be prepared. The bitching will be very prominent. In the next installment we’ll tackle the rest of the Top 100.
Posted by Justin Enuffa Ballard at 1:49 PM