Well Enuffa.com fans, its been another long hot summer in Boston and as Mother Nature finally decides to open her legs and let the heat out of her nether regions, that can only mean one thing -  students are coming back to Boston. And that also means morons will decide that their 14-foot rented U-haul will definitely squeak under the bridges on Storrow Drive.

It seems like once a week now trucks are getting stuck on Storrow. I recall a brand new Boston Fire Department truck trying its hand at squinching under a 9-foot overpass with their 16-foot rig. 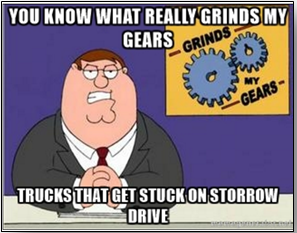 According to the Wiki page I just Googled, “The parkway is named for James J. Storrow, an investment banker who led a campaign to create the Charles River Basin and preserve and improve the riverbanks as a public park. He had never advocated a parkway beside the river, and his widow publicly opposed it.”

I have no idea who Storrow is, but I can see why he is angry - he never wanted a massive roadway with his namesake on it. Someone must have pissed him off something fierce though. In fact I think I just pissed him off - as I write this, my second bathroom toilet* is phantomly running. It must be Storrow’s Revenge!! 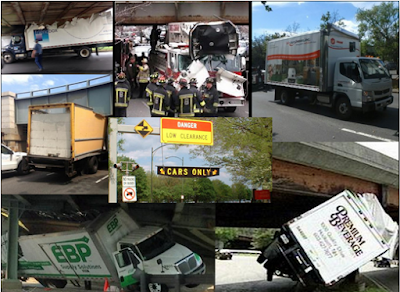 It has to be revenge, an investment banker thinking of ways to get money from the public.  I'm sure he decided to put low bridges on his road and gobble up trucks that dare to pass. How can anyone be that stupid to drive a truck on his road??

This major crosstown parkway feasts on box trucks like I devour General Gau's at a Chinese buffett.

It really grinds my gears when I hear another story of a truck driver who has disregarded the Low Clearance sign and become devoid of its roof. Those 11-foot rounded steel girders are just can openers.

“State police cautioned students moving to Boston this week to check their travel routes after a truck got stuck under a bridge on Storrow Drive Tuesday afternoon. Police said the truck became caught in the eastbound lane at the Longfellow Bridge at 2 p.m. The driver, a 19-year-old from Pelham, New Hampshire, was issued a citation, according to police.”

Sucks for that 19-year old college freshman. I wonder how much this Revenge will cost him; between the citation, the charges forthcoming from U-Haul (and I have to believe he declined the accident coverage), factor in the cost of the tow truck to get him un-wedged... I'm thinking he’ll be selling his text books, trading away all his Pokémon GO thingies, and trying to make 20 bucks THE HARD WAY at his closest college campus.


There are so many trucks that get stuck on Storrow. I have to think Boston just loves this. It's such easy money for them when Storrow devours these idiots.

I think everyone is in on this little cash cow too. From the tow-truck drivers to the municipal workers who are probably getting OT for the cleanup. Lest I forget the cops needed  to perform detail duty while the air pressure in the tires is lowered and the rage-pressure rises from all who are stuck in traffic.


There are Low Clearance warnings, but those don’t help. I’m sure there is so much more that could be done, but we don’t do anything to prevent it. They sit and wait for the next one (CHA-CHING!). Which is bound to be any day now.

*I got three toilets in my house, one for peeing, one for puking and one for pooping.
Posted by Justin Enuffa Ballard at 10:42 AM

Email ThisBlogThis!Share to TwitterShare to FacebookShare to Pinterest
Labels: Other Stuff