Well sir (and madam), another G1 Climax tournament is in the history books, and what a wild ride it was.  This is only the second G1 I had the privilege of experiencing as it happened, and while the tourney began in slightly underwhelming fashion compared to last year's, it built to a cresendo and ended on a VERY high note, with two near-perfect "semi-final" matches and an almost equally great Final. 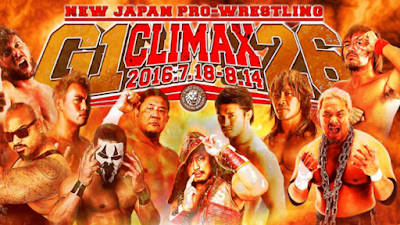 Both Landon and I correctly predicted the winner (meaning I called both this and the BOSJ winner, because I rule), and I couldn't be happier that the company went with the more adventurous choice of Kenny Omega to headline next year's WrestleKingdom.  I know many were upset that Naito didn't get the duke, but as I said before, we've seen Okada vs. Naito twice this year, and they co-headlined WrestleKingdom 8 already.  Now is the time to create new main eventers, and Kenny Omega proved over the last two nights of the G1 that he is more than ready for that position.

The two NOAH imports both put on impressive showings - Naomichi Marufuji predictably had good-to-excellent matches with almost all nine of his opponents, while Katsuhiko Nakajima, with whom I was unfamiliar going in, impressed me quite a bit with top-notch showings against Michael Elgin, Naito, Kenny Omega, and Shibata.  This NJPW vs. NOAH angle they set up yesterday is certainly intriguing, and hopefully they'll get some good mileage out of it.

The booking of the tourney was certainly unexpected.  Tanahashi for example went 0 for his first 3 matches before going on a tear and coming within inches of winning A Block.  The execution of the A Block finale was shocking in a good way; Tanahashi and Okada put on yet another epic match that ran the full 30 minutes, going to a draw and allowing Hirooki Goto to back-door his way to the Finals.  Goto had several very good showings during the tournament but once again fell short of the big win at the end.  I'm not sure where his story goes from here (I have a good idea, more on that in a bit).  IWGP Champ Okada took a few pretty significant losses, dropping matches to Bad Luck Fale, Marufuji, and stablemate Ishii (I want like crazy for Ishii to use that loss as the impetus for demanding a Title shot).  LIJ members Evil and Sanada got some big wins, Evil over Shibata (I'd love to see a rematch of that one) and Michael Elgin; Sanada over Goto, Ishii and Tanahashi.

The tournament MVP this year (for at least the second time some would argue) was Tomohiro Ishii, who turned in multiple great performances against a variety of opponents, most notably his Chaos pal Okada.  Ishii would've been my choice to win A Block as a matter of fact.  The guy deserves a main event run, as he's consistently one of the most compelling stars in the company.

As always this year's G1 had easily half a dozen Match of the Year candidates (though not as many as the 2014 and 2015 editions), and narrowing the list down to a Top Ten was a bit challenging.  But I've done so - below are my picks, in chronological order.

The tournament started off with a bang, as two bouts from Day 1 made my top 10.  The IWGP Champion and the GHC Champion put on a clinic that saw Marufuji score a minor upset.

Speaking of upsets, LIJ henchman Sanada very unexpectedly took Tanahashi's return match away from him, and the NJPW Ace had trouble righting the ship after that.  This bout was nearly as good as Okada-Marufuji.

A short-but-awesome fight, stablemates Ishii and Goto beat the snot out of each other for twelve minutes, leading to Ishii's second straight loss.

This felt like the blowoff to the Elgin-Omega feud and was the first possible indicator that Omega was moving on to greater things.  These two pulled out all the stops over this 17-minute war and Elgin got a decisive win.

It was very refreshing to see Ishii get to mix it up with a perennial main eventer like Tanahashi, and I hope it won't be the last time we see this match.  This felt like a big deal and Ishii looked right at home in this spot.

That was even more apparent here, as Ishii and Okada delivered the tournament's first five-star caliber match.  This was 19 stupendous minutes of almost non-stop action and Ishii took an upset win over the Chaos leader.  As I said, there needs to be a PPV Title match between the two.  This was incredible.

On that same show was Tanahashi's encounter with the GHC Champ, and it easily would've been Match of the Night had it not immediately followed Okada vs. Ishii.  Still this was a ****+ match in its own right, and the fact that it was able to follow the previous bout is quite an achievement.

If there were any doubt that Okada-Tanahashi is one of the greatest rivalries in wrestling history (and probably THE greatest in Japan), this match erased it.  The thirty-minute running time flew by as the company's top two stars hit each other with literally every move they could think of to wrap up the A Block.  Drama, nearfalls, traded finishers; this match had it all, and it ended with Tanahashi hitting a High Fly Flow, only for the clock to run out AND for Okada to kick out of the pin attempt.  This ranks among their best matches together, and that's saying a lot.

Shockingly, the two B Block "finalists" actually upstaged Okada and Tanahashi.  This was unbelievable.  Omega announced himself as the worthy successor to AJ Styles, with an absolutely star-making performance.  This was also probably the best Naito match I've ever seen.  Naito savagely worked Omega's knee (and Omega sold it brilliantly), while Omega added half a dozen big moves to his repertoire on his way to a thrilling 28-minute victory.

I had my doubts about this one I must confess.  I like Goto but he's always struck me as a step below the upper echelon guys.  Yes he's had plenty of great matches, but I've generally been a little underwhelmed when he's been put in a main event position.  But this match was excellent, and both guys deserve a ton of credit for following the Day 17 and 18 main events.  While not quite at the level of those two bouts, this was an exceedingly worthy Final and easily gets a ****1/2 rating from me.  I never really pegged Goto to win the tournament, but there were enough suspenseful moments here that it actually seemed plausible.  And the finishing sequence where Omega hit the finishers of his two Bullet Club predecessors (Prince Devitt and AJ Styles) before wrapping things up with the One-Winged Angel was HUGE.  It announced that Omega was everything those two guys were, and more.  This was a great moment to cap off a fantastic match. 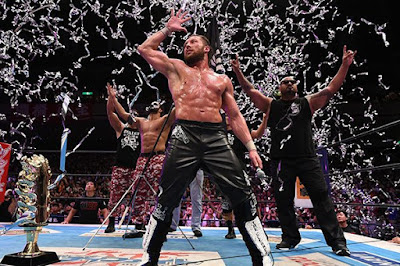 All in all, another great G1.  A step down from last year's in my opinion, as AJ, Nakamura and Ibushi were all missed.  But everyone involved really stepped up their game over the second half of the tourney to make this one very memorable.  And the potential WrestleKingdom 11 pairings are certainly exciting.  Here's what I'd like to see on January 4th:

IWGP Championship: Kazuchika Okada vs. Kenny Omega - I'm super stoked for this first-time matchup
IC Championship: Tetsuya Naito vs. Hiroshi Tanahashi - I say have Naito take the belt off Elgin and defend against The Ace
NEVER Openweight Championship: Katsuyori Shibata vs. Michael Elgin - This would be a sick slugfest
Tag Team Championship: The Briscoes vs. Tomohiro Ishii & Hirooki Goto - Seriously, how awesome would an Ishii/Goto Tag Title run be?
ROH Championship: Jay Lethal vs. Jay White - Okay, this is probably just wishful thinking on my part, but it'd be great
Jr. Heavyweight Championship: Kushida vs. Will Ospreay - Yeah, we've seen it twice before, but this time Ospreay could actually take the gold
Jr. HW Tag Championship: The Young Bucks vs. Matt Sydal & Ricochet - Or vs. reDRagon.  Either way, the Jr. Tag belts need a traditional one team vs. one team match at WK


So that's where my head's at coming out of this year's G1.  What'd you think of it all?  Comment below, and thanks for reading!  Stay tuned for Landon Wayne's take coming soon!
Posted by Justin Enuffa Ballard at 11:31 AM