Welcome to another round of Enuffa.com WWE PPV Predictions! 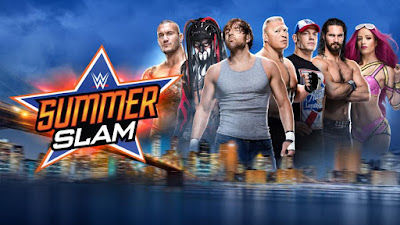 This Sunday is the #2 PPV on WWE's calendar, SummerSlam!  Like last year the show is in Brooklyn, the show will be four hours, and the show has the potential to be a classic.  Actually I found last year's SummerSlam a rather unexpected pleasure, one that for me easily upstaged WrestleMania 31.  This year's WrestleMania set the bar fairly low, and on paper the SummerSlam lineup bludgeons it to death with its own shoes.  There are at least three or four potential Match of the Year candidates on this show and I'm not sure which bout I'm most excited for.

The WWE brand split is in full effect, with predictably mixed results.  The good news is we have a bevy of marquee matchups on this card and a ton of star power.  The bad news is, WHERE THE FUCK IS SAMI ZAYN??  The guy won his feud with Kevin Owens while delivering a MOTY candidate, and they have nothing for him to do??  Move him to Smackdown where there's room then.  Christ!

Anyway, let's take a look at the lineup. 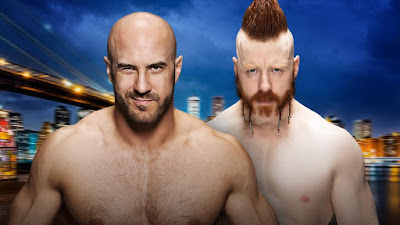 I'm not sure why this needs to be a Best of Seven series, especially since they've already fought twice on RAW.  But I like this pairing.  I'd like it even more if Sheamus weren't damaged beyond repair.  Both of these guys should really be on the blue brand, as they're getting lost in the shuffle on the overcrowded RAW.  But this match should be a good, stiff slugfest.  Cesaro better come out of this feud with some real direction.

Justin's pick: I think Sheamus takes the first match in the series
Dan's pick: Dude, I dunno. This seems pointless to me. Cesaro. 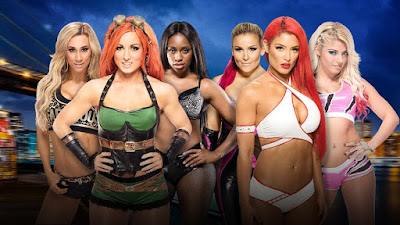 Not much going on in this one except for the Becky-Nattie feud.  Somehow this is leading to the introduction of a Smackdown Women's belt, and if you ask me (and WWE hasn't) I'd prefer the current Women's Champ simply be featured on both shows.  But what do I know?  There's enough talent in this match for something entertaining but I doubt it gets much time.

UPDATE: Eva Marie has been suspended, so she will no longer be participating.  Dunno if that means a handicap match or what.  Personally I'd just turn it into a five-way for the new Smackdown Women's Title. 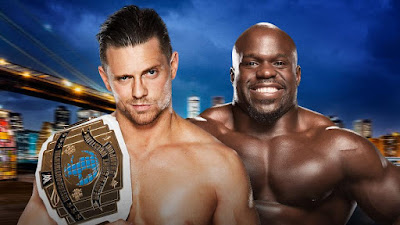 It's telling how thin the Smackdown roster is when Crews is already getting an IC Title shot.  Crews has thus far had no direction and little in the way of a character.  He's an accomplished athlete and a likable babyface, but main roster Creative hasn't given us a reason to care about him.  Know what would've been ten times better?  Move Sami Zayn to Smackdown and have him feud with The Miz!  What sense does it make that the super-over Zayn isn't on this show but the not-over Crews is in a Title match?

Justin's pick: This could go either way, but since fans aren't really clamoring to see Crews win the belt it makes much more sense to leave it on Miz for now.
Dan's pick: I see no point in giving this to Apollo right now. 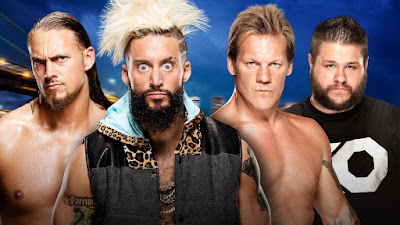 This Jericho/Owens pairing is pretty strange considering Owens was on the cusp of the main event picture a month ago.  I guess if this leads to a program between the two that'd be worth it.  This match should be quite amusing given the personalities involved.

US Championship: Rusev vs. Roman Reigns 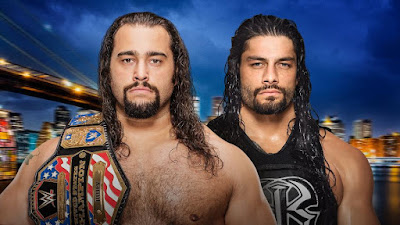 I guess the problem posed to Creative was, "How can we get this hateful Russian jerk cheered by most of the audience?  I've got it!  Feud him with Roman!"  This feud is clearly Roman's punishment for violating the Wellness Policy, and I suppose a last-ditch effort to rally people behind him.  I do not and will never understand WWE Creative.  The fans for months and months have been begging for Roman to just be a heel, Roman all but turned heel against AJ Styles and Seth Rollins, and now they've positioned him as a babyface again.  We're living in Bizarro World.  Furthermore, this match was given away six days out from SummerSlam, on RAW.  And it was a 20-minute match.  What are you doing??

Justin's pick: I think Rusev retains, possibly by getting DQ'd or counted out
Dan's pick: I’ve never understood the rationale of giving away the match right before the PPV. Rusev retains. 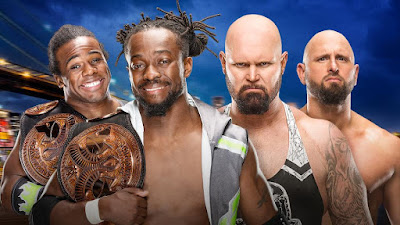 The Club get another shot at the belts.  I'm not sure why WWE split them off from AJ Styles only a month after they officially united, especially when their new Club T-shirts were super cool-looking.  Whatever.  The New Day is coming up on a year-long Title reign.  They've already broken the record for the WWE Tag belts, though the overall World Tag Title record is still held by Demolition, at 478 days.  It'd be cool to see The New Day break that streak, but I dunno if I can see them keeping those belts till at least December, particularly since Big E is out with a storyline injury.  I think The Club's time might be now. 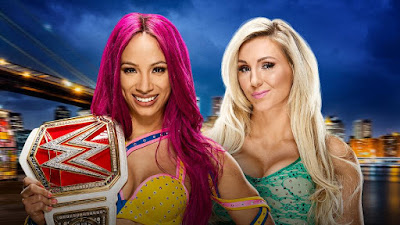 Now comes a five-match block of awesome.  This is one of the three matches I'm most looking forward to.  Sasha and Charlotte tore the house down on RAW a few weeks ago and I fully expect them to do the same here.  WWE better give them at least 15 minutes, preferably closer to 20.  I could watch Sasha and Charlotte fight all day long.  Sasha just won the belt so I can't see her losing it already. 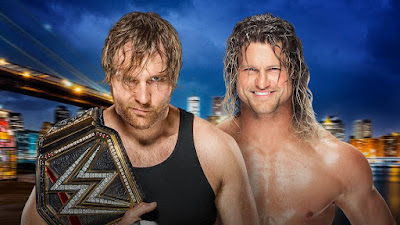 Here's another example of a match I'd be much more excited about if half of it weren't damaged like my basement floor after my washing machine broke.  Ziggler has been beaten down for so long he's incapable of being seen as a top-tier guy, and it's a shame.  It's also a shame that Ambrose, the WWE Champion, is kinda being presented now as a secondary champ so this new Universal Title can be the new yardstick.  Again, I'd have preferred to have the WWE Champ be featured on both shows so it could mean more.  But no.  Anyway, regardless of all the gripes, this should be a helluva good match. 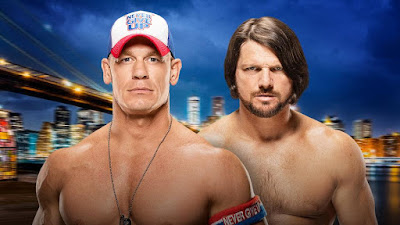 This is probably my most anticipated match of the card.  Cena and Styles had a fine showing at Money in the Bank, but with Cena's jetlag and the fact that they'd never wrestled before, it came off like a feeling-out kinda match.  At SummerSlam we should really see what these two are capable of, and it will likely be the match of the night.  Anything below a **** showing would be a disappointment.  Styles won the first match, Cena evened the score in the six-man at Battleground, and this is the tiebreaker.  Cena put AJ through a table on RAW and stood tall over him, so....

Justin's pick: AJ wins.  This is the only outcome that makes sense.  Cena does not need to beat AJ.  AJ needs to beat Cena to establish himself as a top guy.  Also AJ stepping up to challenge Ambrose next month makes perfect sense and will be a classic.
Dan's pick: Yeah, AJ HAS to win this one. 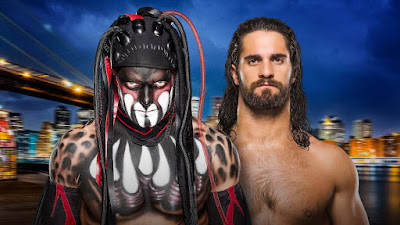 This is my second or third-most anticipated match.  I love that Balor has begun his main roster tenure as a top guy.  Balor is 198 pounds of BOSS, as those of you unfamiliar with his NXT and NJPW work will find out.  This is another match with show stealing potential and should elevate both guys.  I can't help but think that WWE's decision to debut the Demon King persona on RAW has a hidden meaning, which is.....

Justin's pick: Rollins becomes the first Universal Champion.  Having Balor chase Rollins only makes sense.  Rollins is the established main event guy while Balor is very new to most of the RAW audience.  Give Seth a run with the belt (a la Triple H's World Championship run in 2002 when that belt was introduced), and let Balor build himself up through his pursuit of the Title.  Then in a few months the time will be right to give Balor a run.  It should be noted that Jon Stewart is appearing on this show again - you might recall that last year he helped Rollins win, so he could end up costing Rollins this time.  I hope not, but it's possible.
Dan's pick: I didn’t know that about Stewart. I was gonna pick Balor, but thanks to that tidbit, I’m switching to Seth. Thanks, Jingles! 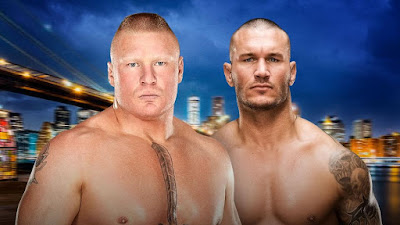 I've been waiting to see this match since Lesnar returned in 2012.  While WWE kept pairing Lesnar up with guys he fought in 2002-03, I kept shaking my head at the compelling fresh matchups being left on the table (Lensar vs. Sheamus, Lesnar vs. Batista, etc.).  But now we finally get to see this, and since Orton was a totally different person the last time they met in 2002, this is essentially a first-time match.  While it doesn't make much sense for this to be the billed main event, particularly given how many Title matches are on this show, I can understand why they've done so.  It's a huge box office draw vs. one of the top guys of the past decade-plus.  I don't much care who wins, I just wanna see a great main event.  One thing that shouldn't happen though, Orton should not fall into the Suplex City trap.  He should be too wily and slippery, and should frustrate Lesnar at every turn, forcing Brock to change his strategy and vary up his moveset.  Regardless, I think we'll see something special.

Justin's pick: Lesnar finally breaks Randy down for the win.  Also it's possible the Wyatts get involved and cost Orton.
Dan's pick: The larger of the 'Roid Boys wins this one.

There you have it.  I think we're in for a treat this Sunday (and this Saturday, as the NXT TakeOver special will likely be even better than SummerSlam).  If SummerSlam isn't the main roster's best PPV of the year I'll be shocked.  The lineup is so stacked and the NYC crowd is so rabid.  My only complaint is that Sami Zayn isn't booked.  That's appalling to me.  But otherwise I'm really looking forward to this weekend.

Comment below with your picks!
Posted by Justin Enuffa Ballard at 10:14 AM