Quite an eclectic crop of flicks we have sitting atop the 2011 heap.  We have a raunchy comedy, a comic book adaptation, a morose character piece, a lighthearted love letter to cinema, and a black & white silent film. 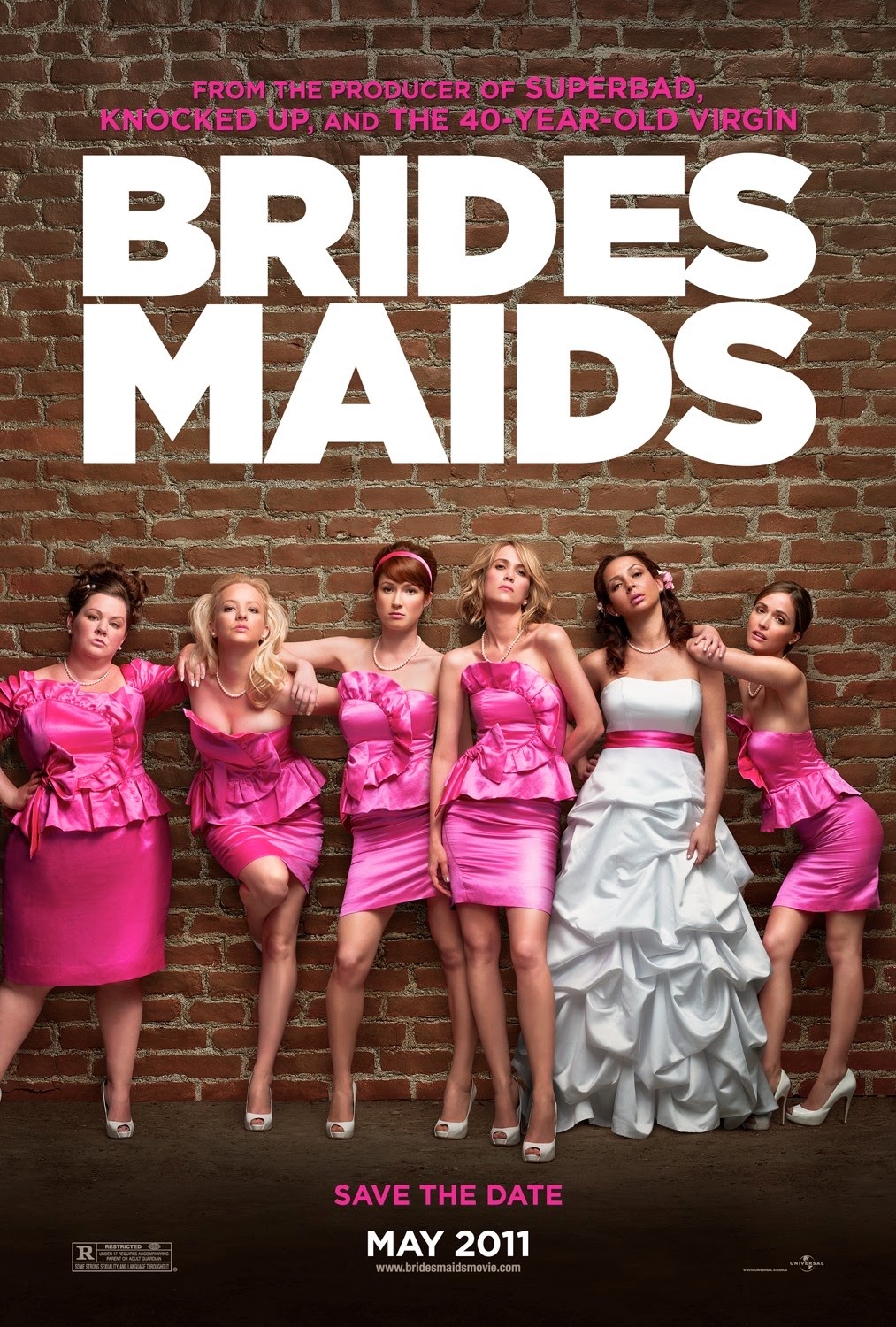 In the tradition of recent comedy hits The 40-Year-Old Virgin and The Hangover, screenwriters Annie Mumolo and SNL alum Kristen Wiig set out to prove female comedic actors could be just as raunchy and hilarious as their male counterparts.  Wiig stars as Annie Walker, a woman whose bakery and relationship have recently failed leaving her dejected and lonely.  Her best friend Lillian (Maya Rudolph) announces she is engaged and asks Annie to be her Maid of Honor, prompting severe insecurity and jealousy issues when Annie meets fellow Bridesmaid Helen, the wealthy and beautiful wife of Lillian's fiance's boss.  A power struggle ensues between the two, who compete both for Lillian's attention and the glory of planning the pre-wedding festivities.  Annie also labors over a potential romance with Nathan (Chris O'Dowd), an affable fellow whose advances Annie's low self-worth prevents her from enjoying.  Bridesmaids assembles an uproarious cast, including The Goldbergs' Wendi McClendon-Covey, Ellie Kemper from The Office, and Melissa McCarthy, in a showstopping Oscar-nominated performance.  The six principle female stars have amazing comedic chemistry and their loose improvisational delivery fits the material perfectly.  Bridesmaids is yet another brilliant entry in the pantheon of Judd Apatow-produced comedies. 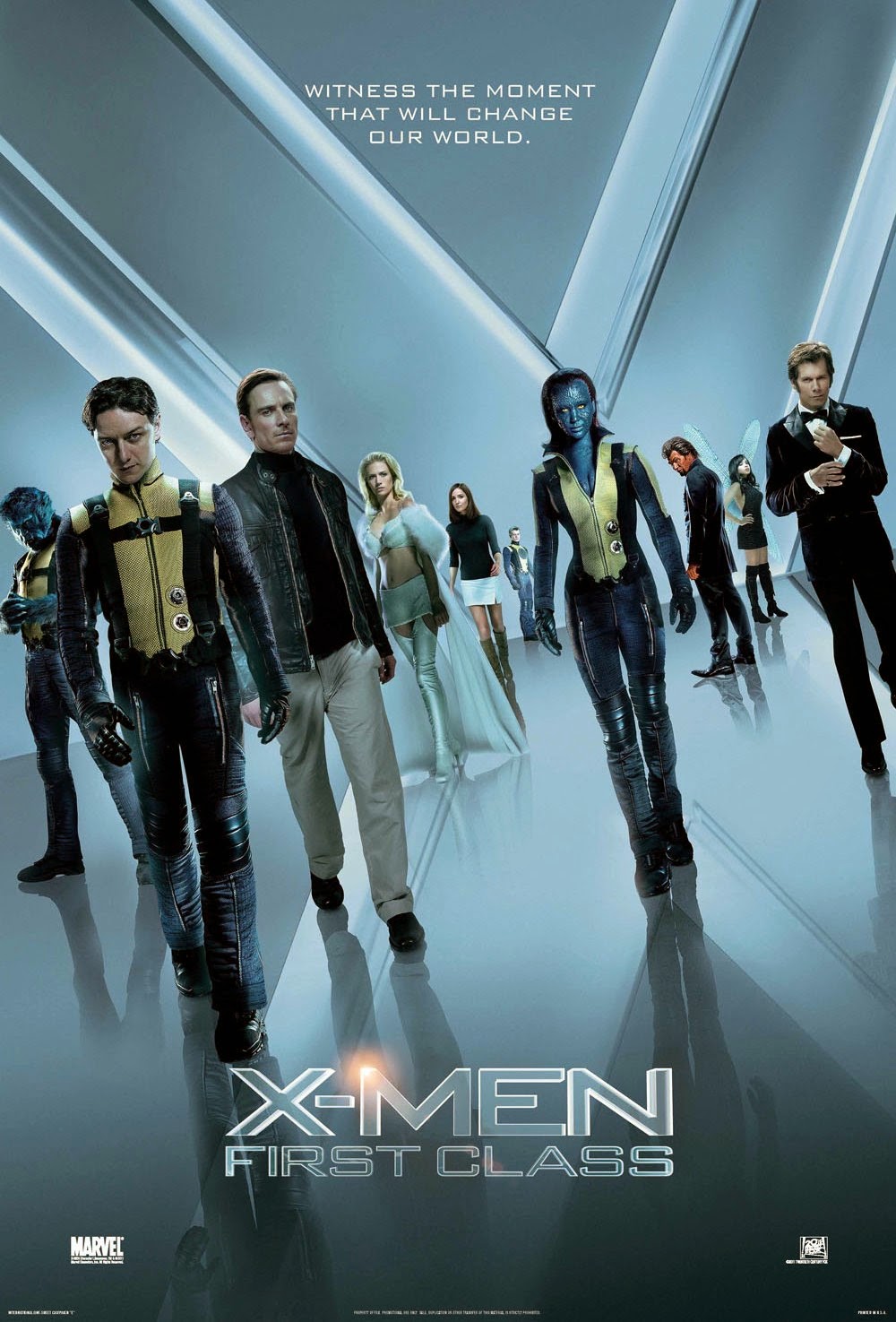 Memo to George Lucas: THIS is how you do a prequel.  Bryan Singer returned to the film franchise he began in 2000 (albeit as a producer) to help create an origin story for Professor Charles Xavier and Erik Lehnsherr (or Magneto, as he's known about town).  Set in the early 1960s at the height of the Cold War, the story follows Professor X and Magneto as they hone and develop their mutant abilities, recruiting others to join their secret government team, the X-Men.  Their mission: thwart the plans of evil mutant Sebastian Shaw, who has designs on starting World War III to decimate the human race, allowing him to rule the planet.  Director Matthew Vaughn expertly captures the tone of the original X-Men comics and wisely focuses on the rocky friendship between the two leads.  The dynamic between Xavier and Magneto plays like a sci-fi Martin Luther King vs. Malcolm X.  The idealistic Xavier strives to preserve peace and understanding between humans and mutants, while the scornful Magneto predicts fear and persecution, like his own childhood oppression in Nazi-occupied Poland.  This difference in ideologies makes for one of the most fascinating dichotomies in comic book lore.  Xavier is played as a hip English swinger by James McAvoy, who wonderfully conveys his patient optimism.  Magneto is brought to life by the always exceptional Michael Fassbender, seething with unresolved anger and driven by revenge for the atrocities inflicted on his family.  Kevin Bacon brings a malevolent charisma to the Shaw character, somewhat mirroring Ian McKellan's older Magneto of the original trilogy.  Rounding out the cast is Jennifer Lawrence as the young Mystique, who I consider one of the most interesting of the X-Men bunch.  In the original trilogy she is taciturn, embittered, cynical, and spiteful of humans and their closed-mindedness, and this film shows how she got that way.  X-Men: First Class lets the characters and their various arcs drive the story, and the result is one of the best-ever comic book adaptations and easily one of the best of this series, rivaling the superb X-Men 2. 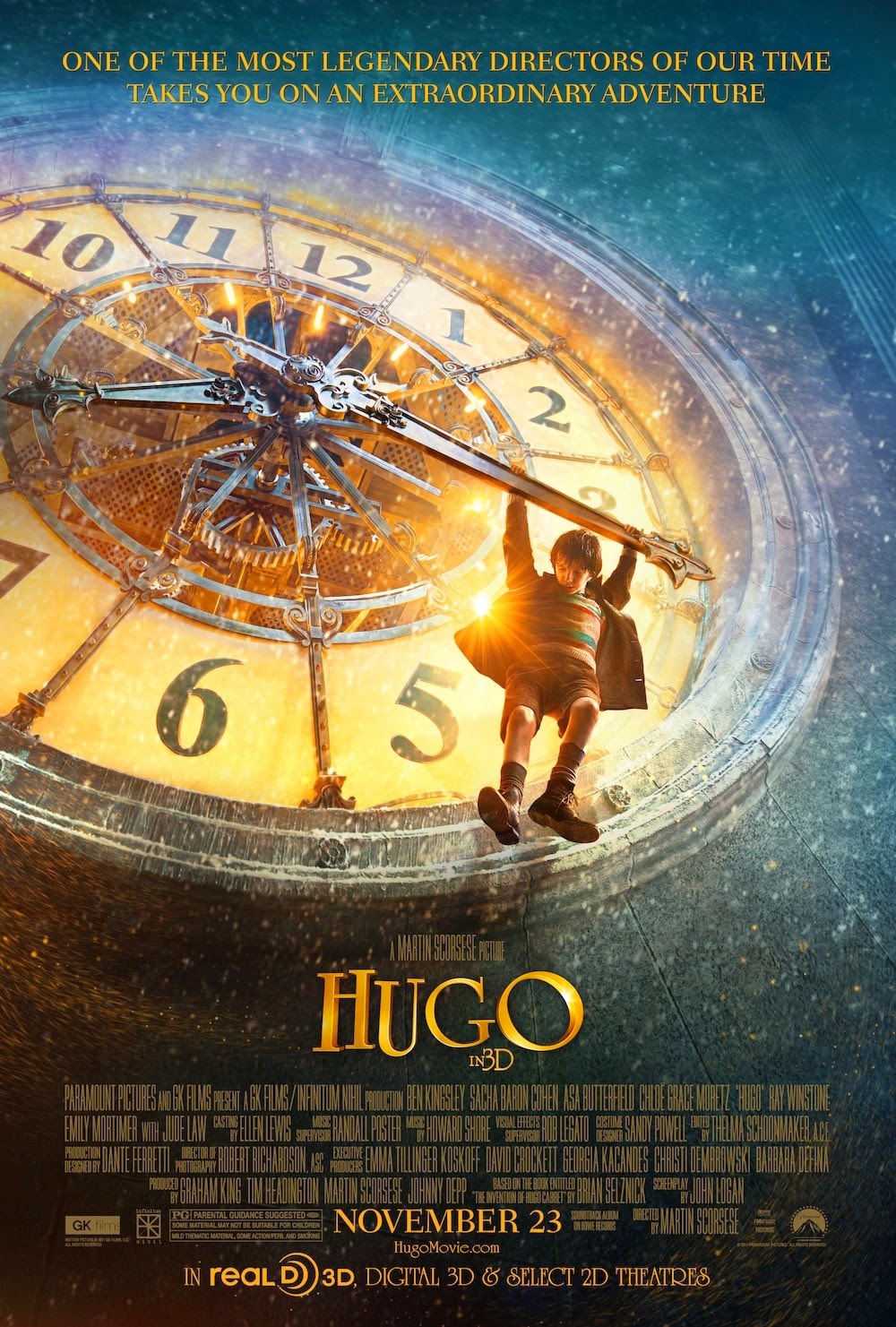 Martin Scorsese's filmography took an unexpected 90-degree turn with this family-friendly, light-hearted tribute to the early days of cinema.  Based on the book The Invention of Hugo Cabret, Scorsese's film follows the exploits of a young boy who lives in a Paris railway station.  Hugo's deceased father, an inventor, taught him how to repair clocks and instilled in him a love for film.  He befriends a young girl, Isabelle, whose stern uncle is revealed to be early film pioneer Georges Melies, director of the first science-fiction film, A Trip to the Moon.  After his career declined sharply in the 1920s, Melies became a disillusioned, bitter man who distanced himself from his prior calling.  Hugo and Isabelle work tirelessly to uncover the story of the forgotten auteur so the world can once again embrace his artistic contribution to the medium of cinema.  Scorsese's film is a delightful and colorful romp, made all the more whimsical by the use of 3-D cinematography.  Where for most films the format seems at best unnecessary and at worst gimmicky and distracting, Scorsese truly uses it to enhance the story and intensify the experience.  Hugo is a rare film in this era of instant gratification and overwrought special effects, that can be enjoyed by any age group.  It doesn't talk down to young audiences and it contains complex character arcs that older viewers will be drawn to.  Hugo is yet another pitch-perfect entry in the Martin Scorsese catalog. 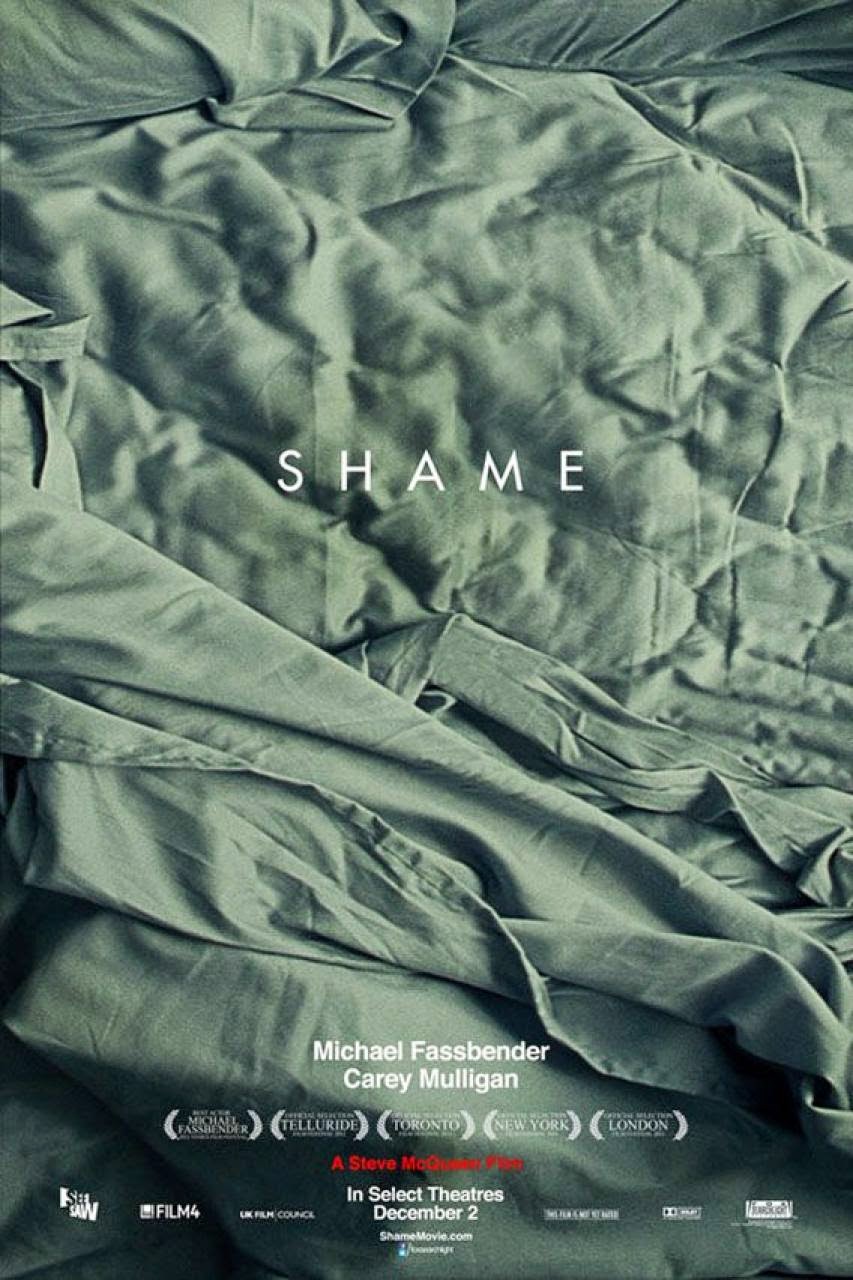 Speaking of deeply troubled Michael Fassbender characters, Steve McQueen's Shame tells the story of Brandon (Fassbender), a New York yuppie with a crippling sex addiction, whose life is thrown into disarray when his estranged sister Sissy (played with quiet despondency by Carey Mulligan) comes to live with him.  Brandon's daily routine involves an endless string of joyless sexual encounters and self-gratification, and Sissy's presence forces him to examine his own dysfunctional existence in growing distress.  Fassbender is an Oscar-worthy revelation in this film, creating a potpourri of emotional turmoil and powerfully conveying how imprisoned Brandon is by his compulsions.  This film could just as easily be about a heroin addict or an alcoholic and it would play out almost the same way.  To Brandon sex is not about love, human connection or even physical pleasure.  It is purely about the temporary expulsion of the inner demon preventing him from functioning in society.  Being forced into close quarters with Sissy is like a constant mirror being held in front of him as he indulges his dependency.  Shame was only Steve McQueen's second feature film and already he demonstrated virtuosic skill as a director.  As with McQueen's other two films, Shame is nearly impossible to put out of your mind. A little something about me: I love silent film.  I love how surrealistic, how dreamlike, how non-literal it is.  In a visually-driven medium, silent film is the most purely visual.  The story and the journey of a character have to be conveyed through imagery, body language, and facial expression.  Dialogue cards help make some of the ideas concrete, but by and large silent film is propelled by all that is non-verbal.  In the silent era there were no restrictions on cinematography and camera moves.  Once sound was introduced, camera position and staging was beholden to the requirements of the audio.  The Artist, both in concept and story, is an homage to this wonderful era, before the Talkies changed (at the time some said "ruined") the film industry.

At the beginning of the film we meet movie star George Valentin, whose silent films have made him a box office sensation.  The story begins just as the movie studios are beginning the transition to sound films.  Valentin refuses to participate in this new medium, certain that Talkies will be a quickly fading novelty.  He attempts to continue making silent films on his own but faces financial ruin when moviegoers are no longer interested in films without sound.  A young actress named Peppy Miller, whom Valentin discovered, becomes a major Hollywood Talkie star just as Valentin's career begins to slide.

Director Michel Hazanavicius went to painstaking lengths to convincingly recreate the look and feel of an authentic 1920s silent picture, and his affection for the medium shines through in the material.  Actors Jean Dujardin and Berenice Bejo are flawless as the two main characters, delivering performances that are absolutely true to the era.

For several years after I rediscovered silent film (particularly German Expressionism), I often thought how great it would be for a current director to make a truly genuine silent movie.  Hazanavicius and company nailed it, creating an enchanting 1920s melodrama that captures the medium.  The Artist is the best film of 2011.


Posted by Justin Enuffa Ballard at 9:25 AM