Evening everyone!  Welcome to another piece  from my good friend Michael Drinan.  It's a series dealing with lesser-known cinematic gems that you should go out of your way to find.  Without further ado, here's Mike......

Welcome to the series “I’d Like to Introduce You To…” which will focus on independent and foreign films that aren’t widely known but are high in quality.  Let’s face it, big budget, big name Hollywood films are everywhere and are usually uninteresting, formulaic and unoriginal.

Sometimes you really want to watch a film that will actually make you have an emotional response to it, something out of left field, unique that leave you considering how you felt and what you thought about the film.  We all need something different from time to time to strengthen our love and appreciation for movies and the independent movie scene is prime real estate for just that very thing.  So, without further ado…let me introduce you to Big Bad Wolves. 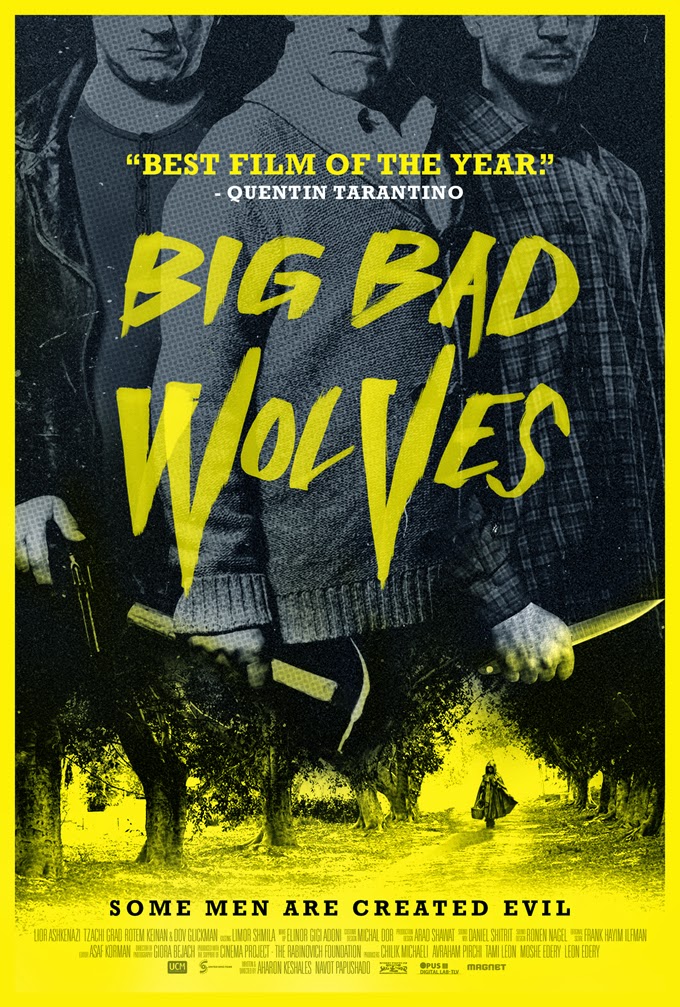 So, you haven’t seen many Israeli flicks about murderous child predators?  Well, you’re in luck then!  My local theater screened this film but I didn’t get a chance to see it until it was streaming on Netflix a month later. (another good thing about independent films is that they don’t have long theater lives and are usually streaming not too long after their release)  It comes with a lot of praise from the international community and from Mr. Quentin Tarantino himself who declared it the best film of 2013, which you can question and take with a grain of salt if you want since this is the same guy who thinks Dragon Flies (aka The Man From Hong Kong) is a really great action flick that still lives up to today’s standards.  How can a man who makes great films have such weird and questionable taste in movies?

Anyways, Big Bad Wolves is a violent, twisted crime thriller about a school teacher who gets accused of abducting, torturing, murdering and beheading a little girl and it seems as if everyone in the community knows he did it including the lead detective on the case who drags him to an abandoned building and begins to beat the piss out of him with a phone book until he confesses.  Unfortunately, his interrogation is captured on video by a teenager hiding in the same building causing the detective to be suspended and subsequently gets thrown off the case.  Fortunately for him, the murdered girl’s father is also on the case and has been tracking the schoolteacher right alongside the detective.  What follows is a brutal, torturous series of events that makes you cringe and seamlessly causes you to question everything.  You will be filled with as much doubt and certainty while watching this film which makes it a good one to watch while you’re in a dark mood.

The strength of this film is that no one likes the idea of children being abducted and murdered, but for some twisted reason we would all love to get our hands on these sick people and do with them as we please.  Big Bad Wolves could’ve easily jumped into the revenge part of the movie but what fun is that?  It takes it’s time while drawing the audience into considering the different perspectives of the various characters.  The acting is superb and believable which helped it win the Best Ensemble Award at the Toronto After Dark Film Festival (a festival that is starting to become a leader in independent film festivals alongside Cannes or Tribeca).  The dialogue is great and there’s something about it being spoken in Hebrew that causes a little chill to run up your spine, especially at the scene where the dead girl’s father is reading the police report of his daughter’s murder in the form of a fairy tale.

There are criticisms I can make about this film too, one of which is not having that final punch to the gut to send it over the top, that “oh my god” moment you have when a crucial piece of information is revealed.  However, it doesn’t ruin the film at all.  Sometimes its the ride that is the best part instead of the finish.

Big Bad Wolves is a little bloody and gruesome but in no way does it over take the movie.  It is a good choice if you’re in that “I’m in the mood for a chilling Israeli flick” kind of mood.  (oh, I’m the only one who gets those?)  Even though I disagree with Tarantino that its the best film of 2013, its still pretty damn good and worth a watch.