Sia's 2014 breakout album 1000 Forms of Fear was for me (as I'm sure for most of her current fans) the gateway to appreciating this mammoth talent.  The streamlined, 48-minute running time contains nary an ounce of fat in its 12 tracks, and boasts some of the best-written and performed pop songs I've ever heard.  In general I'm not much of a pop music fan, but every so often an artist comes along who lends considerable substance to the genre and does things you wouldn't expect (I feel the same about Lady Gaga, for example).  In my experience the best albums tend to be the ones you only come to love after three or four listens.  Familiarity breeds further enjoyment, and albums that aren't so easily digestible are usually my favorites.  But amazingly 1000 Forms of Fear is instantly gratifying without simply running its course after three listens.  The songs are instantly hooky, yes, but beneath the surface is a mature singer/songwriter who 1) actually has something to say and 2) fills each song with layers upon layers of ear candy so each new listen brings a deeper experience.  This is the best album of 2014. 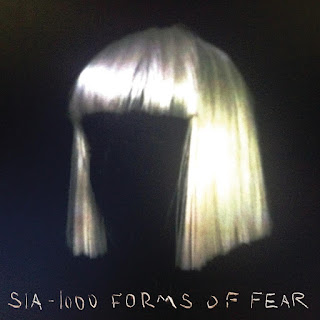 The album opens with Sia's massive hit song "Chandelier," about a lonely woman on an all-night bender.  Right off the bat Sia shows off her amazing vocal range and power, belting the bejeezus out of the soaring high notes in the chorus.  The theme of isolation continues in "Big Girls Cry," a more morose number with a very simple hook.  Next up is the more upbeat "Burn the Pages," which deals with the futility of regret - interestingly Sia cannibalized the song's key lyric "Put your past into a book/Burn the pages, let 'em cook" from her earlier ballad "Lullaby."

One of the instant standouts for me was the fourth track "Eye of the Needle," a joyous, anthemic ode to an unnamed songwriting inspiration.  This song feels enormous and inspirational in a totally non-cheesy way - no small feat.  A quirky indie-pop track is next - "Hostage" recalls with a saccharine tone Sia's less mainstream work on We Are Born.

My favorite song on the album is track 8, the other big single "Elastic Heart," a bittersweet power ballad about a messy breakup, featuring guest vocals by The Weeknd.  Both singers emote like crazy on this song, and I'll be damned if it doesn't get a little dusty in here (*sniff*).....

Another irrefutably hooky love song is the sanguine "Fire Meet Gasoline," the tenth track.  Along with "Eye of the Needle" this song contains the most unabashedly optimistic timbre as Sia hammers out the muscular chorus melody.

Finally there's the album closer "Dressed in Black," a bass-heavy dirge with an extended running time that actually imparts an uplifting message of finding love and hope where there was none.  The chord changes were more or less used again in Sia's current hit "Bird Set Free," but "Dressed in Black" feels much more weighty and groove-centric.  After many repetitions of the final chorus hook, the track ends with a pounded-out descending piano line, putting an exclamation point on this remarkable collection of songs.

Sia had a long career as a largely undiscovered songwriter prior to this album, and actually intended for 1000 Forms of Fear to be the obligatory final disc on her record contract before she focused exclusively on writing for other artists.  Fortunately the singles from this record took off, making her a household name and allowing her to continue creating and singing some of the best-constructed pop music out there.  That she finally got her big break in her late 30s is unusual in itself, but more striking is how stylistically different this album is from everything previous.  She has musically reinvented herself with each release and I'm excited to see where she takes it from here (2016's This Is Acting sounds much like 1000 Forms, but each of those tracks was originally written for someone else to sing).  What is happily certain is that the voluminously talented Sia is here to stay.