For years and years I essentially had no opinion of David Bowie's music.  My parents didn't really listen to him when I was kid, so aside from a few radio singles like "Changes" and the Let's Dance stuff that was new at the time (which I frankly didn't and still don't think much of), I was never much exposed to Bowie.  As with bands like Led Zeppelin and Rush, I was almost totally ignorant of Bowie's work until much later (Thank you again, Mr. iPod!).  But after his unexpected death of cancer last month at age 69 I decided it was time to start exploring.  And since his latest album Blackstar came out just two days before he died and was getting rave reviews, why not give that one a listen?  Why not indeed? 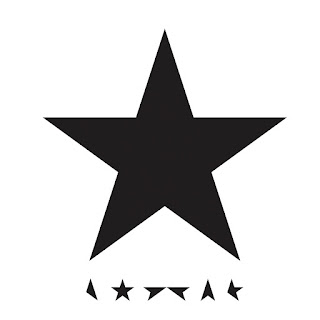 The album is pretty short at 41 minutes and only seven tracks, but given that he was probably very ill while recording it that's perfectly understandable.

Blackstar opens with the title track, a ten-minute funeral dirge with a stuttering jazz beat.  Bowie's harmonized lyrics almost sound like a Gregorian chant, lending an overwhelming bleakness to the song.  This track, like many on the album, carry a "last words" kinda vibe.  Midway through the song everything shifts to a more positive tone, evoking images of a spirit rising from its spent body.  The second act then transitions seamlessly into the third, a slower refrain of the first section.  This marathon track's ten minutes fly by and I consider "Blackstar" to be the strongest song on the record.

Probably the weakest song is #2, "'Tis a Pity She Was a Whore," a bass-driven, rather repetitious piece lamenting an ill-advised romantic attachment.  With this one there just isn't enough going on for me and the song feels unfinished.

Next up is another death-themed tune in "Lazarus," with its mellow alt-rock guitar and sick-bed lyrics about having "nothing left to lose" and being "so high it makes my brain whirl."  The main hook here is a simple saxophone melody in the intro that lends itself to the song's exhausted tone.  This is the anthem of a man who's prepared himself to say goodbye: "This way or no way/You know I'll be free."

The fourth track "Sue (Or In a Season of Crime)" is built on a Tom Morello-esque guitar riff and syncopated Stewart Copeland-type drum pattern, over which Bowie's vocals float, bidding farewell to a dying spouse, who it's later revealed had chosen another man.  This is probably the darkest song as far as subject matter goes.

My second favorite song on here is track 5, "Girl Loves Me," in which Bowie makes use of Nadsat, the fictional dialect created by author Anthony Burgess in A Clockwork Orange.  Bowie's syncopated vocals bounce over a sparse, dark-sounding guitar/bass/keyboard riff, and the chorus has a very cool call & answer structure.  I like this one a lot.

"Dollar Days" is the airiest song on the album, with its sweet piano and bright acoustic guitars.  This one feels like an old classic rock tune that would maybe fit on one of Bowie's 70s albums.  It took me a few listens to appreciate "Dollar Days" but it's grown on me.

The album's final track feels like one last goodbye.  "I Can't Give Everything Away" sounds very 1980s, between the light soprano sax noodling over a bass/synth pad and Bowie's weary, sparse vocals.  There's even a flighty guitar solo in the middle that reminds me of Mark Knopfler.  The lyrical content to me reads like an attempt to sum up Bowie's career in as few words as possible but realizing such an endeavor would be futile.  "Seeing more and feeling less/Saying no but meaning yes/This is all I ever meant/That's the message that I sent..."  In the end it sums up Bowie's swan song nicely - how can you reduce the career of such an important artist to a few lines?  We all just have to take away from it whatever we can.

Since hearing Blackstar I've become pretty fascinated with Bowie; it's been a strong gateway to discovering his much-varied work, spanning 45 years (I was shocked by how many albums the guy recorded - that is one prolific dude) and covering virtually every genre of rock/pop.  Few artists have such a thirst for exploring new territory once they become famous; they tend to find a comfort zone after a while and stick to it.  But Bowie continually took risks and seemingly never apologized for it.  The seven tracks on this album are all completely different and adventurous in their own way, but the underlying message seems to be one of finding peace with this being the end of it all.  Blackstar is a fitting cap to a truly legendary career.