2012 was sort of a weird film year for me.  I had such incredibly high expectations for the year's slate of films, with multiple high-profile comic book-based movies being released, a prequel to Alien, and a new Quentin Tarantino film.  Some of the aforementioned were very good, some of them were pretty awful (*ahem* Prometheus), but I wouldn't necessarily classify anything that came out in 2012 as a truly great film.  Still there was a lot to like. 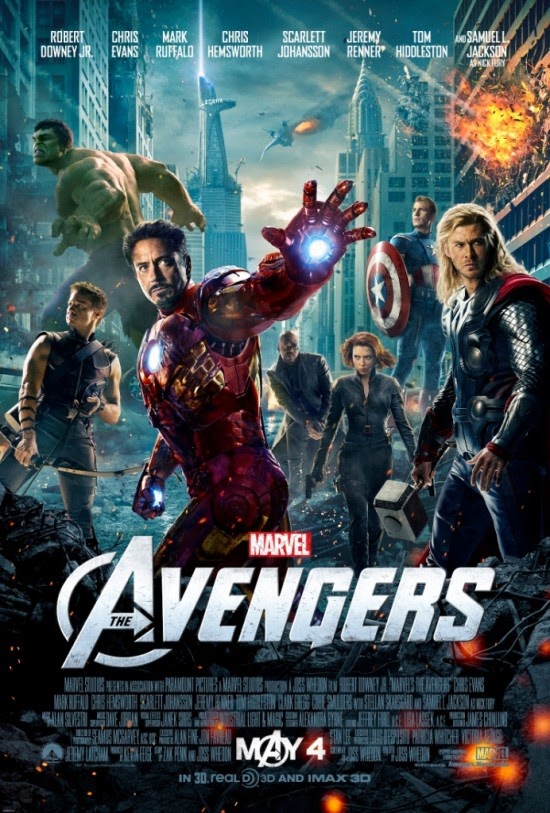 What a fun popcorn movie this is!  I honestly hadn't seen a pure summer action romp this entertaining in many years.  Since just about every action movie around that time tended to be dark, gloomy, disturbingly violent and devoid of likable characters (see Man of Steel), The Avengers was such a refreshing callback to a time when summer action movies were purely about exhilaration and escapism.  It's the deftly assembled climax to a series of Marvel Comics superhero movies, combining all the major characters in such a way that we don't need to spend much time on expository scenes (we've already done that in the previous films) and we can get right to the meat of the story and how these established characters interact with each other.  Director Joss Whedon manages to fit all these larger-than-life personalities into one film without it becoming overcrowded, and keeps the action set pieces fairly simple but memorable, resisting the temptation to make them overly long where they'd become tedious (unlike a certain Superman film I could name).

The villain, Thor's brother Loki, is charismatic and just menacing enough to be a threat without darkening the mood of the film or distracting from the main thrust of the story - how these egotistical superheroes work together to save mankind.  In that respect The Avengers is almost an origin story in that we've never seen all these characters in the same film.

For me the most enjoyable part of The Avengers was the portrayal of Bruce Banner and The Hulk.  The two standalone Hulk films each had aspects that got the character right, but Mark Ruffalo's weary, trepidatious performance nailed it.  I also loved how well the story built to Banner's first transformation, particularly the early scene where Black Widow has to recruit him to help the Avengers.  There's a moment when Banner suddenly snaps at her, and she recoils in her chair, drawing her gun on him in abject terror.  Even after he reveals he was only joking, she is still mortified.  This is the way to foreshadow The Hulk.  One of my favorite moments in the whole film.

The Avengers became a massive box office hit and it's easy to see why.  This is just pure summer fun; a loving tribute to comic book superheroes. 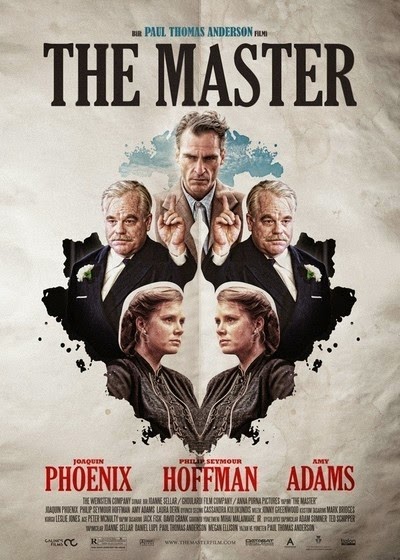 Ah, Paul Thomas Anderson.  A truly unique filmmaker who consistently challenges convention and presents films that are complex and not easily digestible.  The Master is no exception.  Inspired by the life of L. Ron Hubbard and his Scientology cult, The Master follows the story of Freddie Quell, a WWII veteran and social misfit who stumbles upon a new religious society founded by the Hubbard-esque Lancaster Dodd and is swept up in the promise of community and the desire to belong.  Dodd is fascinated by Quell's free nature and his bizarre alcohol concoction made with paint thinner, and what follows is a strange power struggle, as Dodd attempts to tame Quell and mold him into a model follower.  The three principal performances are all amazing - the late Philip Seymour Hoffmann shines as always, injecting Dodd with a twisted warmth while simultaneously showing a man on the verge of frantic desperation.  Dodd's wife played by Amy Adams is patient and matronly but domineering, constantly there to rein her husband in from the edge.  But the show-stealer is Joaquin Phoenix as Quell, a man so brazenly out of control and bursting with post-war rage and sexual deviance no father figure could possibly contain him.  Phoenix should have won the Best Actor Oscar for 2012 as far as I'm concerned, and I'm saying this about a category that included Daniel Day-Lewis.  That's how magnificent Phoenix's performances is, folks.  The Master is most definitely not for everyone, and many viewers will be left asking, "But what does it all mean???"  Still,between the gorgeous 65mm cinematography, three stunning performances, and the distinctive P.T. Anderson direction/script, The Master is one of the best films of 2012. 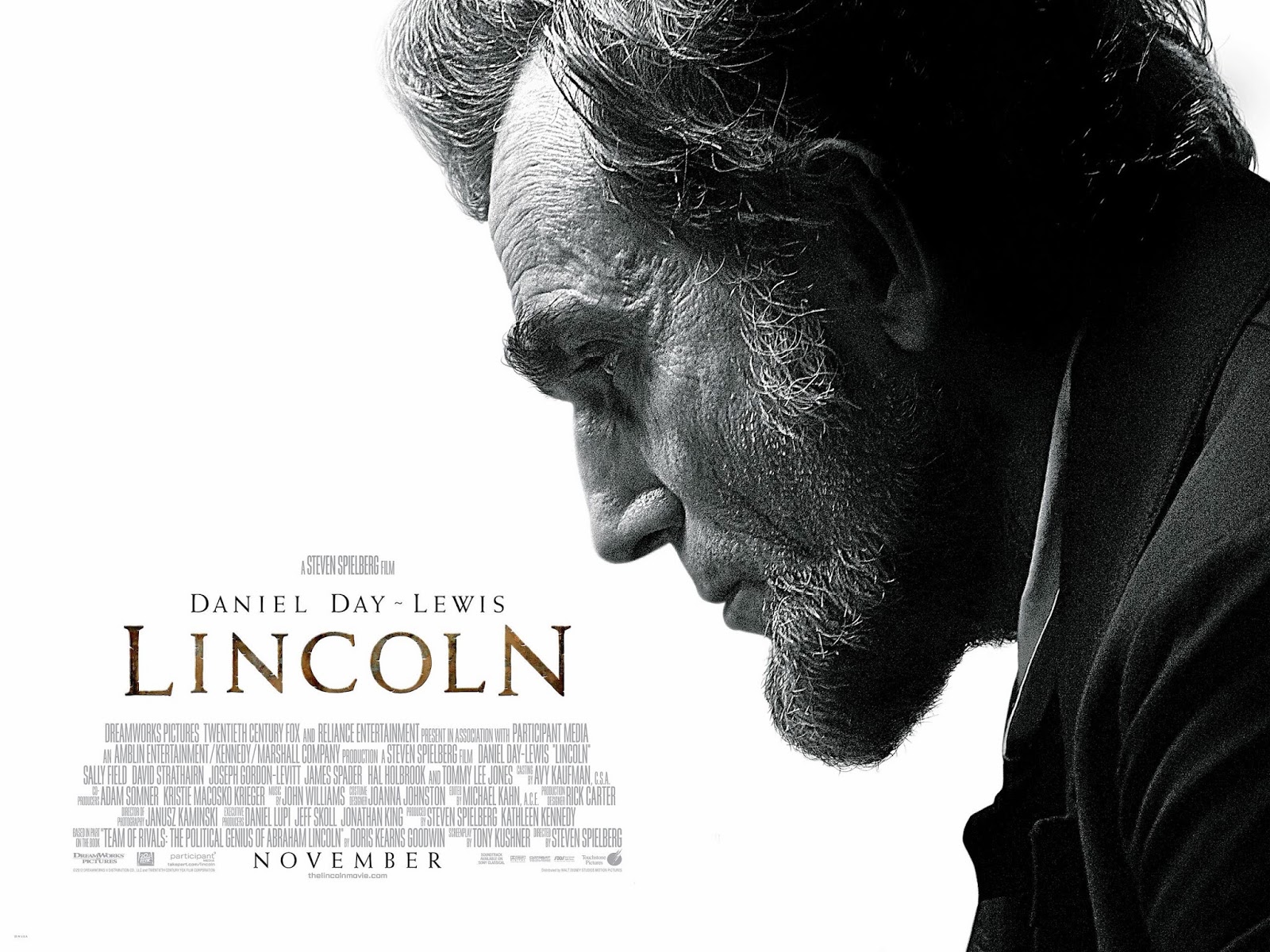 Steven Spielberg's semi-adaptation of Doris Kearns-Goodwin's Team of Rivals was in the works for several years, so long in fact that original star Liam Neeson had to drop out of the project due to scheduling conflicts.  This was a major blessing in disguise, as the part of Abraham Lincoln went to master thespian Daniel Day-Lewis.  Day-Lewis is one of the most chameleonic actors alive, and he once again disappeared into the role, transforming into the extolled 16th President.  The film deals with the final months of Lincoln's life, as he balanced the ongoing American Civil War and the need to pass a Constitutional amendment abolishing slavery.  Lincoln urgently pressed Congress to pass the 13th Amendment before the Civil War ended, lest the conquered slave states create an imbalance in the House and Senate that would render the Amendment unpassable.  At the same time however he was being pressured by his more moderate allies to end the war as soon as possible, which would lose him the support of the hard abolitionists in Congress.  For a film set largely in the Capitol building and various sitting rooms, it's quite gripping, especially since we know historically how it turned out.  In addition to Day-Lewis's wonderful performance, Sally Field as Mary Todd Lincoln and Tommy Lee Jones as Thaddeus Stevens are both excellent.  The film is sprinkled with a slew of other recognizable faces, including Joseph Gordon-Levitt as Lincoln's son Robert, and David Straithairn as Secretary of State William Seward.  Lincoln as a whole is very understated and strives for realism and historical accuracy, and we're given a rare glimpse into the inner workings of the 19th century American political process during one of the nation's most tumultuous eras.  It's a return to form for Spielberg, whose recent work has been a mixed bag for me.  Lincoln adds yet another career performance to the resume of Daniel Day-Lewis, easily one of the most talented actors to grace the screen. 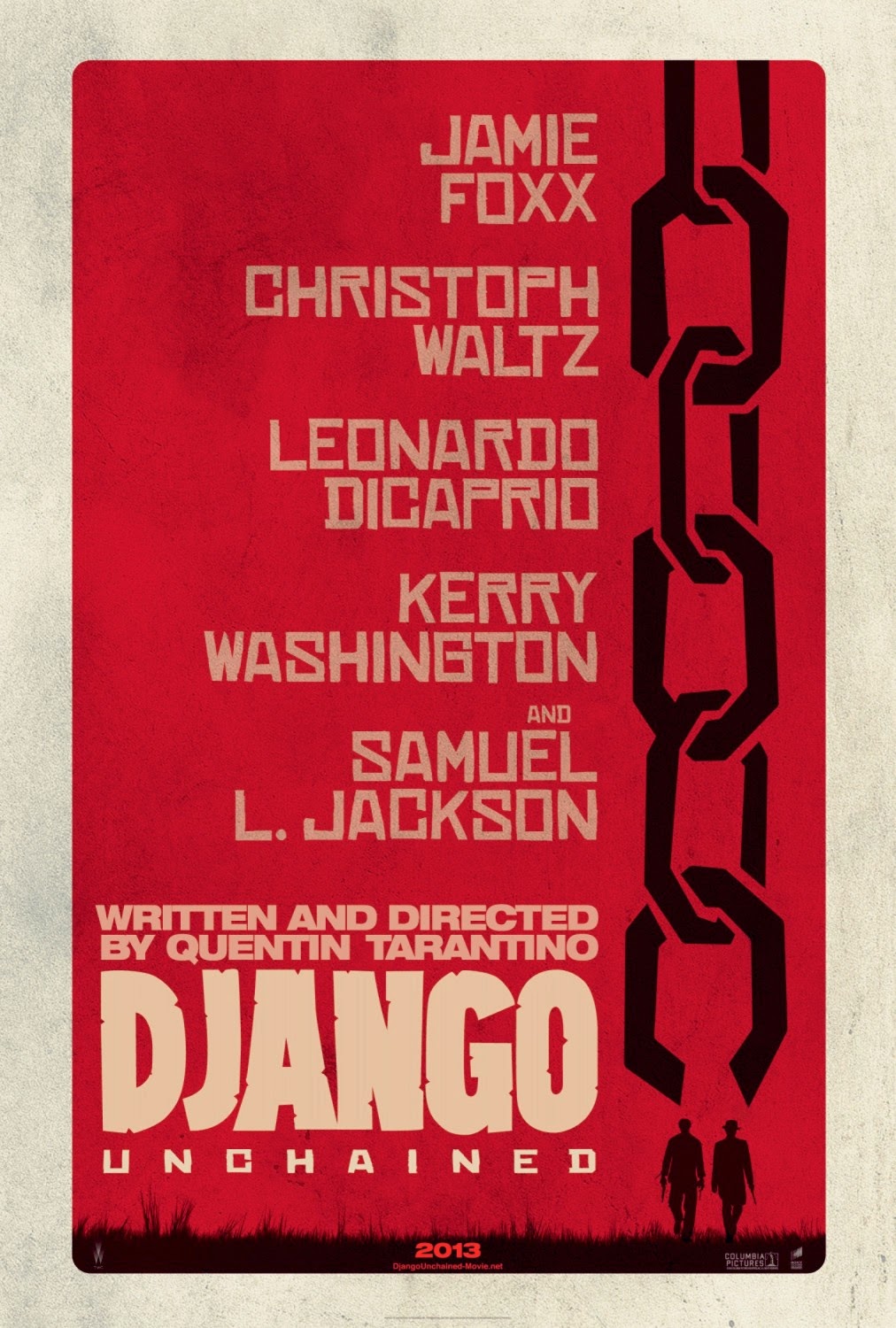 The 2012 Quentin Tarantino epic is another Western-influenced exercise in excess, and as a Tarantino fan I wouldn't have it any other way.  Django Unchained is the story of a pre-Civil War slave on a quest to rescue his wife, from whom he was separated when they were sold to different owners.  He is stolen by a German abolitionist bounty hunter named King Schultz (the always excellent Christoph Waltz), who in exchange for Django's assistance in tracking down three criminals, frees Django and offers to help him find his wife Broomhilda.  The film is full of Tarantino's trademark quirky, amusing, and profanity-laced dialogue and over-the-top stylized violence.  The plot thickens about an hour in with the introduction of two villainous characters, plantation owner Calvin Candie (played with malicious glee by Leonardo DiCaprio) and his house slave Stephen (one of Samuel L. Jackson's best and most memorable performances).  Django doesn't quite hold up to its predecessor Inglourious Basterds (which I'd rank as Tarantino's second best work after Pulp Fiction), but it's a very engaging homage to Spaghetti Westerns and blaxplotation films of the 70s.  It features three terrific supporting performances, plenty of uncomfortable laughs, and enough cartoonish gun violence to please any splatter-film fan.  At two hours and forty-five minutes I found it a tad longer than it needed to be, but that time goes fast and it's obvious Tarantino (who in a third act cameo sports one of the worst Australian accents in cinema history) is having a helluva good time as usual. 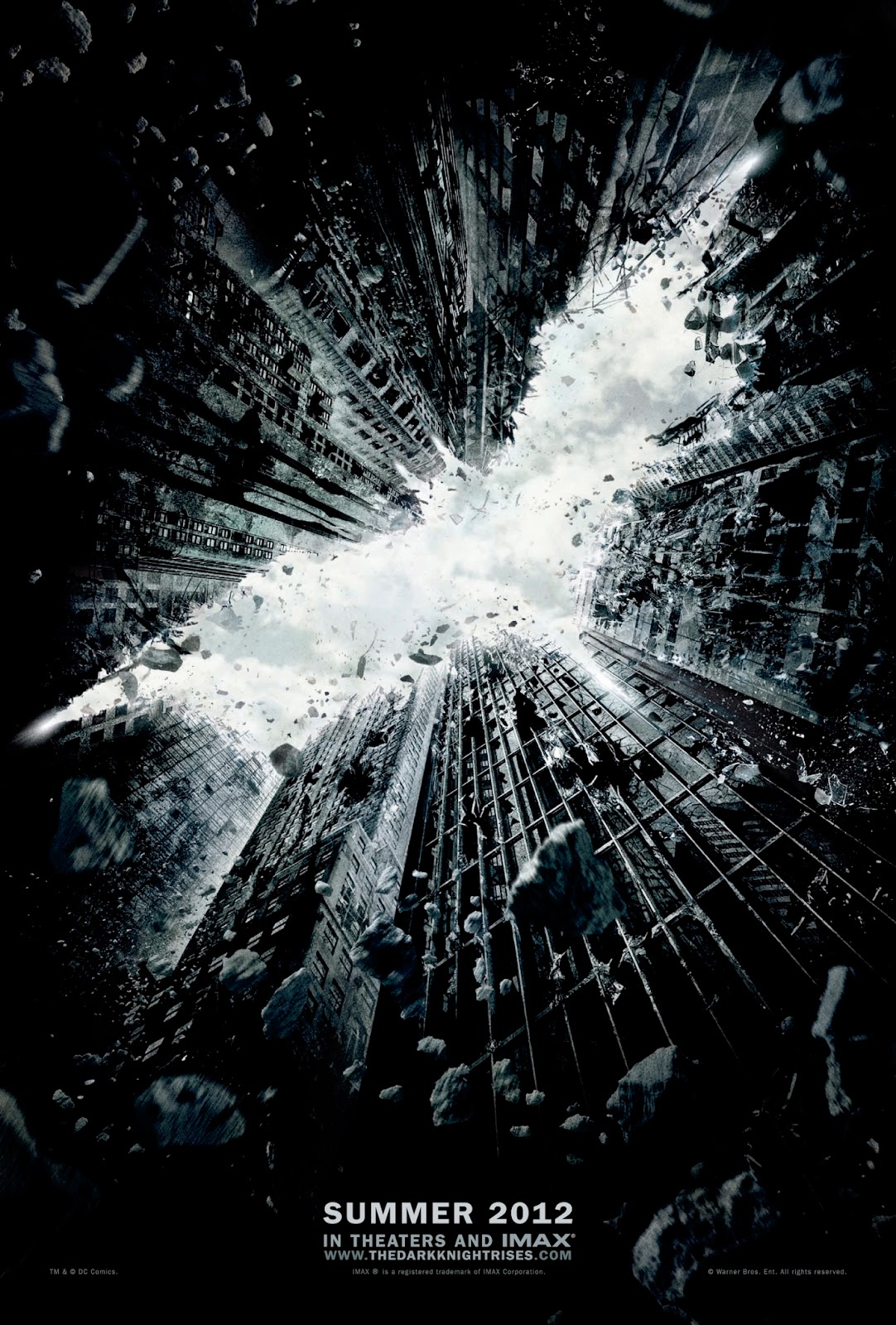 The controversial final chapter of Christopher Nolan's Dark Knight Trilogy has taken quite a lot of flak for perceived plot holes and various other nitpicks, but in the end it's an exceedingly worthy conclusion to one of the best film trilogies of all time.  2008's The Dark Knight set the bar impossibly high for comic book films, achieving near-perfection and featuring one of the greatest, most unforgettable villains in movie history.  After the death of Heath Ledger, the sequel would have to carry on without the presence of The Joker.

Nolan set the third film eight years after the second, with both Batman and Bruce Wayne in reclusion in a Gotham City that seemingly no longer needs them.  A new terrorist, the freakishly strong, prodigiously malevolent Bane, emerges to wreak havoc and death on the entire city, and Batman is forced out of retirement.

Added to the mix is a morally ambiguous cat burglar named Selina Kyle who is both a foil and romantic interest for Bruce/Batman.  Anne Hathaway brings a sleek, playful sexiness to this rather unscrupulous, bitter character who wants to do the right thing but feels she has been shoehorned into being a lifelong criminal.

Christian Bale as Bruce Wayne is fantastic as usual, this time exploring some new territory as the scarred, broken protagonist who doesn't think he deserves to move on and resume a normal existence.  Trilogy mainstays Michael Caine as Alfred, Gary Oldman as Commissioner Gordon, and Morgan Freeman as Lucius Fox once again bring verisimilitude and gravitas to the film.

The most memorable performance belongs to Tom Hardy as Bane.  The versitile, medium-sized actor manages, with some help from cinematographer Wally Pfister, to bring Bane to life as a muscle-bound giant of a man, brutal, calculating and remorseless.  Hardy, despite acting from behind a mask basically the entire film, is able to convey palpable menace, deep-seated rage, agony, and intelligence entirely through physical and vocal mannerisms.  For the first time in the series we fear for Batman's physical safety, as Bane has him completely outmatched and is forthright about wanting to beat and torture him into submission.  Their first battle is a masterfully-executed piece of cinematic hand-to-hand combat.

While The Dark Knight Rises isn't perfect - it runs a bit long, there are some pacing issues and a few too many peripheral characters, some scene-to-scene transitions are abrupt, and the third act deals with the old "ticking time bomb" scenario - it's an eminently fitting conclusion to a truly great series of superhero films that transcend the genre and will undoubtedly stand the test of time.  Despite its flaws, The Dark Knight Rises is the best film of 2012, according to me.

Posted by Justin Enuffa Ballard at 9:33 AM