Last night, I finally got the opportunity to watch the Oscar-nominated documentary Amy, a look at the life and career of the late Amy Winehouse. The film was directed by Asif Kapadia, who also directed the fantastic documentary Senna (never knew I could have an interest in Formula One racing), and was released in July 2015. Films and documentaries about musical artists can be frustratingly shortsighted, choosing to focus mainly on the downfall (drugs, booze, affairs, etc.) of the artist while mentioning their career achievements as if it's merely window dressing. This film had that look so I went into it cautiously. 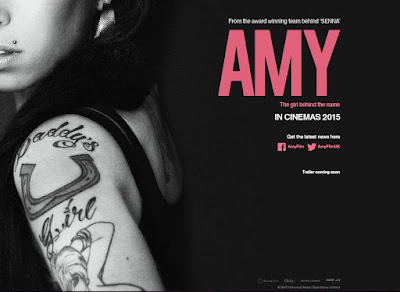 The first third of the film was refreshing and informative. It told the story of where Amy came from, her home life, how she became interested in music, how she connected with those who helped steer her career in the beginning, and detailed how she saw herself as an artist. I didn’t know she was originally a guitar player. The movie used home video footage and interviews from those who were close to her at the time, adding color to her career before she was a mainstay in the tabloids. She was portrayed beautifully and honestly by her closest childhood friends, and it showed her progression as a singer along with her development as an artist. Interviews from Tony Bennett, Mos Def, Questlove gave their personal stories, showcasing the human side of Amy that no one in the press or the fans ever had a chance to see.

Then, the film took a turn as her ex-husband came into the picture. The arc of her career and her music took a backseat to the tabloid circus she would mostly be remembered for. The recording of her first album Frank was talked about briefly and then the movie quickly moved to her touring on that album. I remained patient, hoping that covering the writing and recording process of her landmark album Back to Black would right the ship. I thought they couldn’t skip out on the details of one of the most successful and landmark albums of the 2000s.


But I was wrong.

There were probably a total of four to five shots of her in the studio recording Back to Black, two of the shots showed her drinking whiskey and coke to reinforce her alcohol addiction, and that was it. The film moved on to the success of the album, the media storm that ensued and thus began her descent into drugs, eating disorders and booze. After an hour of this, I began yelling about how disappointed I was that another documentary on an artist was turned into nothing but extra paparazzi footage. It made me wonder what the point of making the documentary was, if there was even a point at all. I mean, do we really need a documentary detailing the downward spiral of Amy Winehouse? Didn’t we all see it as it unfolded and hear the stories many times? I doubt you’d find anyone who was legitimately surprised when news of her unfortunate death came out. Is the trainwreck important to her story? Sure it is, but should it be the focus? No, it shouldn’t.

Even though I was disappointed in the overall narrative of the film, it was a well-made documentary and I can understand the acclaim it's received, even the Oscar nomination. The director was able to get interviews from her father, mother, friends, bodyguard, husband, manager, her first manager and a variety of artists that knew her well. He used the home video footage to draw out the shy, fun and personable girl underneath the trainwreck. There were moments during the film that I empathized with Amy, quietly hoping that her turns in rehab proved successful, fully knowing they didn’t. The director was successful in showing the person Amy really was, even during the troubled times in her life.

Amy Winehouse had a voice unlike any other singer during the 2000s and a sharp, witty personality to go along with it. Her songwriting talent was relatable and relevant. She allowed the return of unconventional women to the pop mainstream and reinvigorated the jazz genre, infusing hip hop and R&B together to create a style all her own. Hopefully, we’ll get a film in the future that will highlight this woman, her achievements, and her legacy while keeping all that other stuff as simple window dressing. Until then, this movie is a good place to start when learning about Amy Winehouse.