Welcome to another set of Enuffa.com PPV Predictions!  This'll be a two-part piece, as NJPW is presenting their annual double-shot The New Beginning!  The New Beginning in Osaka is the first New Japan PPV post-Nakamura, and while his absence leaves a sizeable hole in the roster, both of these shows should still present some good matchups.  So let's take a look at the Osaka card.... 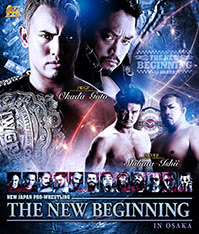 
Both these young lions have loads of potential and this should be a solid opener if it gets enough time.  The company needs to elevate some young talent in a hurry, so this could be a great showcase for both guys.


Another one of those filler six-man tags, there's not much at stake here.  I imagine the Liger team picks up the win as usual. 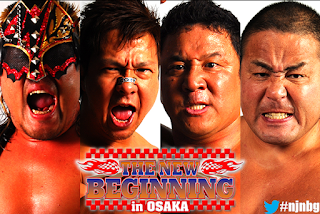 A tag battle of four veterans but not a lot going on with any of these fellas lately.  I'm guessing Tencozy wins here to keep them relevant as Tag Title challengers since Anderson & Gallows are about to head west. 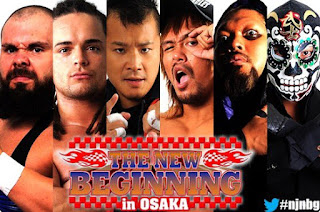 This match should re-esablish Naito's stable as rising heel stars, particularly since The Bullet Club is losing three of its top members.  Plus this will be a preview of the Kushida-Bushi match on the other show.

My pick: Los Ingobernables gets a much-needed win 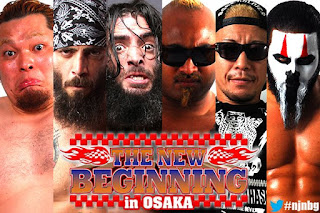 A rematch from WrestleKingdom 10, this is the first of two times these two trios will face off at New Beginning.  For some reason the second PPV will feature the same match but not for the belts, which leads me to believe they're splitting the wins.  I'm guessing that means The Bullet Club wins the belts here and then loses the non-title match so The Briscoes can look strong for when they come back to New Japan. 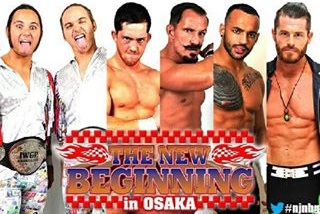 This should be great.  Three of the four teams in the WK10 opener will meet once again.  Sydal & Ricochet are fantastic to watch, and the Bucks and reDRagon will be excellent as always.  This'll be a wild one.

My pick: The Young Bucks have to retain I imagine 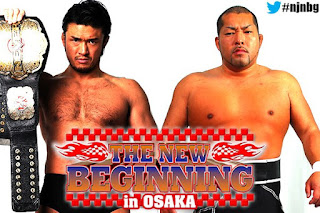 Another WK10 rematch, this should be just as brutal as its predecessor.  These two nearly stole the show last month and they'll have a very good chance to do that for real here.  I'm hoping Shibata becomes the new custodian for the NEVER Title and Ishii moves up to I-C.  Time to shake up this division. 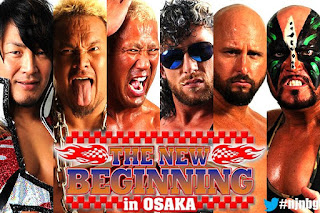 Combining two of the top matches at the second PPV, this match will help establish the Tanahashi vs. Omega feud.  Omega has been pegged to replace AJ Styles as the new Bullet Club leader, and he should do quite well in that role.  We'll also see Anderson & Gallows' second-to-last match before they depart for WWE.  Should be a fine six-man with multiple stories playing out in preparation for the Sunday show. 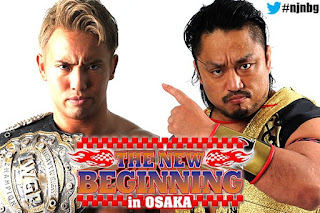 Interesting pick for Okada's first Title defense as New Japan's new Ace.  Goto's been a solid upper-midcard guy for several years and should give Okada plenty to work with, but there isn't much suspense about who's winning.  I can't imagine Okada finally beating Tanahashi at WrestleKingdom only to lose here.  Goto's clearly being used as a credible challenger who isn't really that much of a threat.

There's your New Beginning Part 1 card.  Certainly nowhere near the quality of WK10 but it should yield some solid stuff and lead nicely into Part 2.  Check back here Friday for my picks in that show.  Thanks for reading!

Part 2
Posted by Justin Enuffa Ballard at 11:35 AM