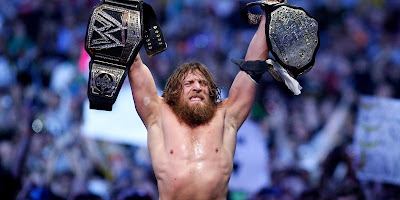 Well the thing I feared has come to pass.  Daniel Bryan's wrestling career is over, cut short at the age of 34.  No two ways about it, this fucking sucks.  Bryan's been my favorite wrestler in the world since 2007 when I first popped in the DVD of Ring of Honor's Fight of the Century and watched this diminutive grappler go a full hour with the monstrous Samoa Joe.  Here was a wrestler I'd heard so much buzz about as a true in-ring artist.  I'd attended a live ROH event that January and bought a handful of DVDs, most of which featured Bryan Danielson, and when I sat down to watch Fight of the Century I was shocked to learn this man wasn't a flashy high-flier but a grounded, technical wizard.  It was so refreshing to see the fluid, European style made famous by William Regal but turned up several notches.  From then on I sought out every Danielson match I could get my hands on, and marveled at his numerous bouts against Nigel McGuinness, whom I still consider Danielson's greatest opponent.  If you haven't seen Danielson in ROH, you simply must seek out shows like Driven, Unified (the two best Danielson-McGuinness matches), Dissension (vs. AJ Styles), and the aforementioned Fight of the Century.  The stuff he did in ROH was completely different from his strike-based WWE style, and for me even more compelling.

Daniel Bryan was a guy I'd resigned myself to believing would never be picked up by the 'E.  He was small and didn't have the look or the in-ring style Vince likes.  So I was shocked in late 2009 when Bryan and McGuinness were both signed (Nigel failed the medical screening unfortunately and went to TNA instead), but even then I figured "Ok Bryan'll be a tag team or I-C division guy for a while and then he can go back to ROH but make more money."  Not in my wildest dreams did I think Bryan would get to headline WrestleMania and leave as the company's top Champion.  Of course he mostly succeeded despite the company's best efforts, as they first stuck him on NXT with 7 rookies, booked him to go 0-10, bumped him from his first WrestleMania, had him lose in 18 seconds at his next one, and after becoming the company's hottest star in summer 2013 they attempted to dump him back to the midcard, making him all but an afterthought for WrestleMania 30.  Two things changed their plans: CM Punk, who was scheduled to face Triple H at WM30, walked out of the company; and Vince's plan to use the returning Dave Batista as that year's mainstream WWE Champion backfired horribly.  The fans would not accept anyone but Daniel Bryan as the company's central figure, and Vince begrudgingly shuffled the card around.


'Mania 30 would go on to be one of the most satisfying of the entire series and Daniel Bryan turned in two career performances on his way to winning the WWE Title.  The stage was set for a nice six-month run before a likely SummerSlam loss to Brock Lesnar.  But sadly Bryan's recurring neck and shoulder issues caught up with him and he was forced to vacate the belt.  This was heartbreaking, as he'd worked so hard to get there, and his fans had waited so long to see the company appreciate him.

A brief return in 2015 saw him once again marginalized in favor of Vince's "chosen one" Roman Reigns, who failed completely to draw the fans' sympathy (through no fault of his own really, Vince had taken literally everything away from Reigns that made him popular in the first place).  Bryan got barely more than a cameo in the 2015 Royal Rumble, and after losing a #1 Contender's match to Reigns at FastLane, was shoved into a 7-man Ladder Match at WM31.  At least Bryan walked away with the Intercontinental Title though, and would likely bring that belt back to prominence and prestige.  But another injury forced another Title forfeit, and as it turned out Bryan would never wrestle again.

The last ten months have been torturous, not knowing when or even if Bryan would be medically cleared to return.  The fact that he passed two outside concussion tests with flying colors led me to suspect he was only being held off TV so his popularity wouldn't "screw up" yet another WrestleMania season.  But apparently the traditional tests can be misleading if the subject is intelligent enough to "circumvent" the damaged parts of the brain, and a more advanced test revealed a worse condition than originally thought.  Couple that with Bryan and his wife Brie looking to start a family soon, and it seems he just doesn't think it's worth risking further injury.

I hate this.  Aside from past wrestling-related deaths I can't remember a more upsetting moment in my thirty years as a fan.  I'm saddened to see my favorite wrestler's career come to a premature end, I'm resentful of the dozens of old-timers who still get to compete into their 40s and 50s despite no longer being relevant, I'm desolate over this gaping hole in the WWE roster and the fact that I have very little emotional investment in any other wrestler right now, I'm bitter about how little Vince McMahon seemed to appreciate this world-class talent for the last six years, and I'm skeptical that Vince will have learned anything from this saga when booking guys like AJ Styles or Shinsuke Nakamura, or anyone else who doesn't "fit the mold" of a top star.  I hate this.

All these negative feelings aside, I'm happy that Bryan Danielson had such a fantastic, groundbreaking career, and that he is at peace with this situation.  I wish him nothing but prolonged happiness, and hope he can find something outside of wrestling about which he can be just as passionate.

Thank you Daniel Bryan.  The business of pro wrestling was greatly improved for your having been a part of it.  WWE will be a much smaller place without you.  You truly are The Best in the World.
Posted by Justin Enuffa Ballard at 11:11 AM