2013's Oscar bait season was one of the strongest in recent memory, and four of the five standouts of the year (plus a few other gems) were released during 2013's closing months. 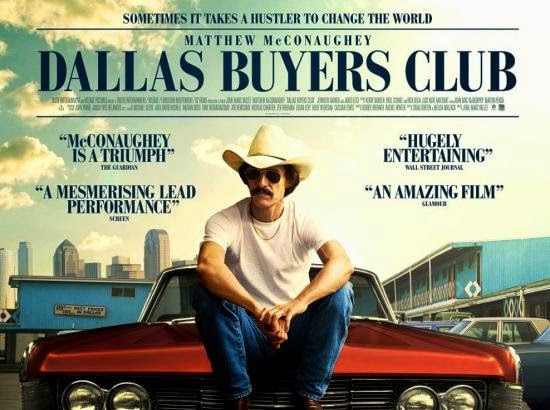 This grim but ultimately inspiring true story of rodeo cowboy Ron Woodroof's long battle with AIDS is an intimate character study that showcases two extraordinary performances.  Matthew McConaughey continues his impressive foray into serious cinema after a long stint as a typecast romantic comedy lead, and Jared Leto returns to acting after a five-year hiatus with a career performance as Rayon, Woodroof's transgender business partner.  Jean-Marc Vallee uses muted colors and stark realism to portray Woodroof's physical decline and personal redemption as he opens an unauthorized pharmaceutical distributorship for AIDS patients.  Both actors deservedly won Oscars in 2014 and the movie heralded a major comeback for McConaughey in particular. 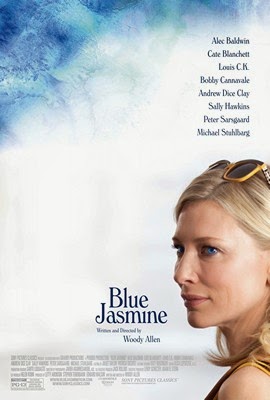 As someone who is not a self-described Woody Allen fan per se, I was incredibly impressed with this story of a disgraced woman's descent into self-pity and madness.  Cate Blanchett delivers probably the best performance of her career.  As Jasmine, the widow of an ultra-wealthy stock swindler who has lost her entire fortune, Blanchett creates a positively loathesome, self-obsessed character who has spent a lifetime looking down on the 99%.  And yet somehow though we as the audience should revel in her frankly rather well-deserved misery, we find ourselves rooting for her to pull herself out of financial ruin and get back on her feet.  That Blanchett is able to make such an awful woman so sympathetic is remarkable.  We spend the entire movie being disgusted with this character, but when her dishonest and manipulative plot to climb back up the social ladder fails in the end, we still feel for her.  This is the best Allen film I've seen.

3. The Wolf of Wall Street 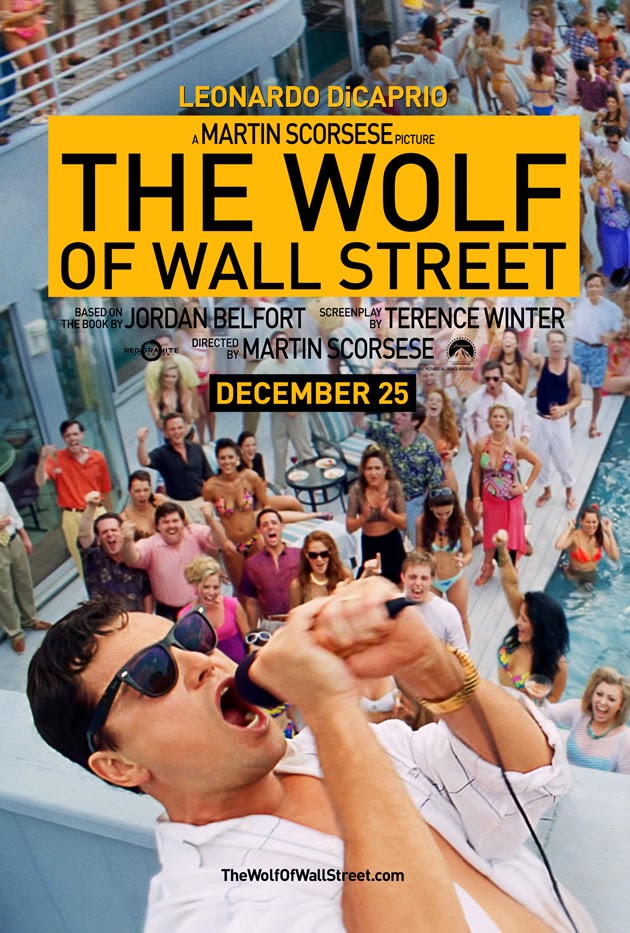 Here's a movie almost as excessive as the world its characters inhabit.  Martin Scorsese delivers yet another epic study of gang life, except that instead of taking everything they want with guns and violence the characters in WoWS use sleazy sales tricks and illegal trading tactics.  The true story of Jordan Belfort plays as a wildy outrageous dark comedy about sex, drugs, and money.  Leonardo DiCaprio does some of his finest work, embodying a coked-out, womanizing scoundrel we can't help but sorta like.  His right-hand man Donnie Azoff is played brilliantly by Jonah Hill (Who would've thought the "fish boots" kid from The 40-Year-Old Virgin would end up with two Oscar nominations?) with an assist from a false set of ridiculously white teeth.  At three hours, WoWS is Scorsese's longest (and most f-bomb laced) film, but the time flies by as you watch these self-indulgent, self-destructive characters scheme, party, screw, and fall down hard. 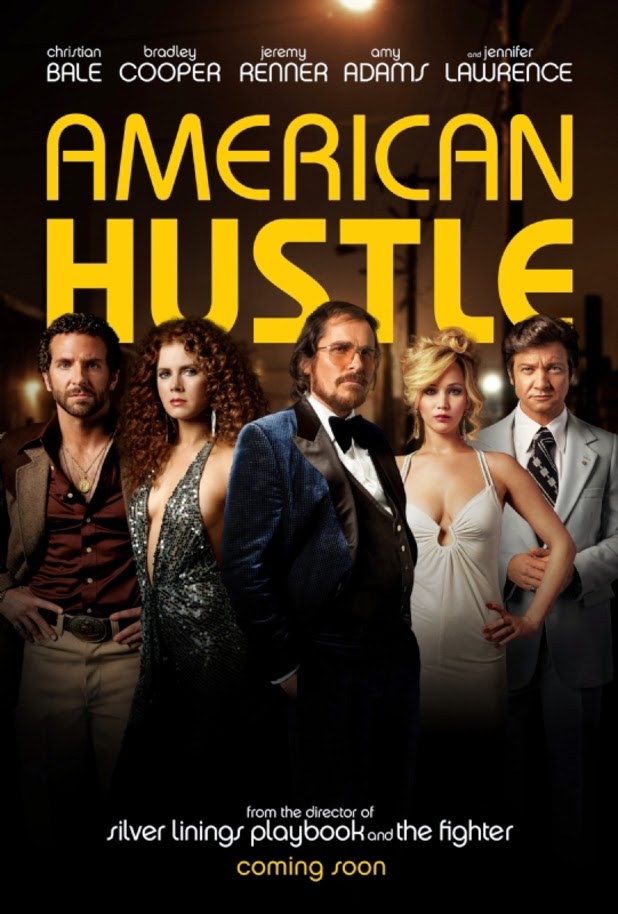 This film has one of the greatest casts in recent memory, and all four principle actors garnered Oscar nods.  American Hustle hits a homerun in basically every aspect of production.  Great script, check.  Great direction, check.  Great performances, check.  And it's one of the funniest movies of the year to boot.  Christian Bale once again physically transformed himself to fit the character of Irving Rosenfeld, a balding, overweight con artist loosely based on real-life conman Melvin Weinberg.  As usual Bale is fantastic, and yet his performance ends up feeling a little thankless next to those of his three main co-stars.  Amy Adams essentially gets to play dual roles as Irving's partner in crime Sydney - her character reinvents herself as the situation demands.  Jennifer Lawrence shows a world-weariness beyond her years as Irving's wife Rosalyn.  She is both annoyingly irrational and naively sweet.  The real show-stealer though is Bradley Cooper as Richie DiMaso, the FBI agent who busts Irving and Sydney, and forces them to help him entrap several high-profile politicians in the hope of becoming a star in the Bureau.  Cooper delivers a dazzlingly high-wire combination of swagger and desperation, managing to outshine even his amazing co-stars.  American Hustle is a hilarious, fast-paced film about characters we should find replusive but we're strangely drawn to.  In the end they're all just trying to find happiness and self-fulfillment, they just have funny ways of going about it. 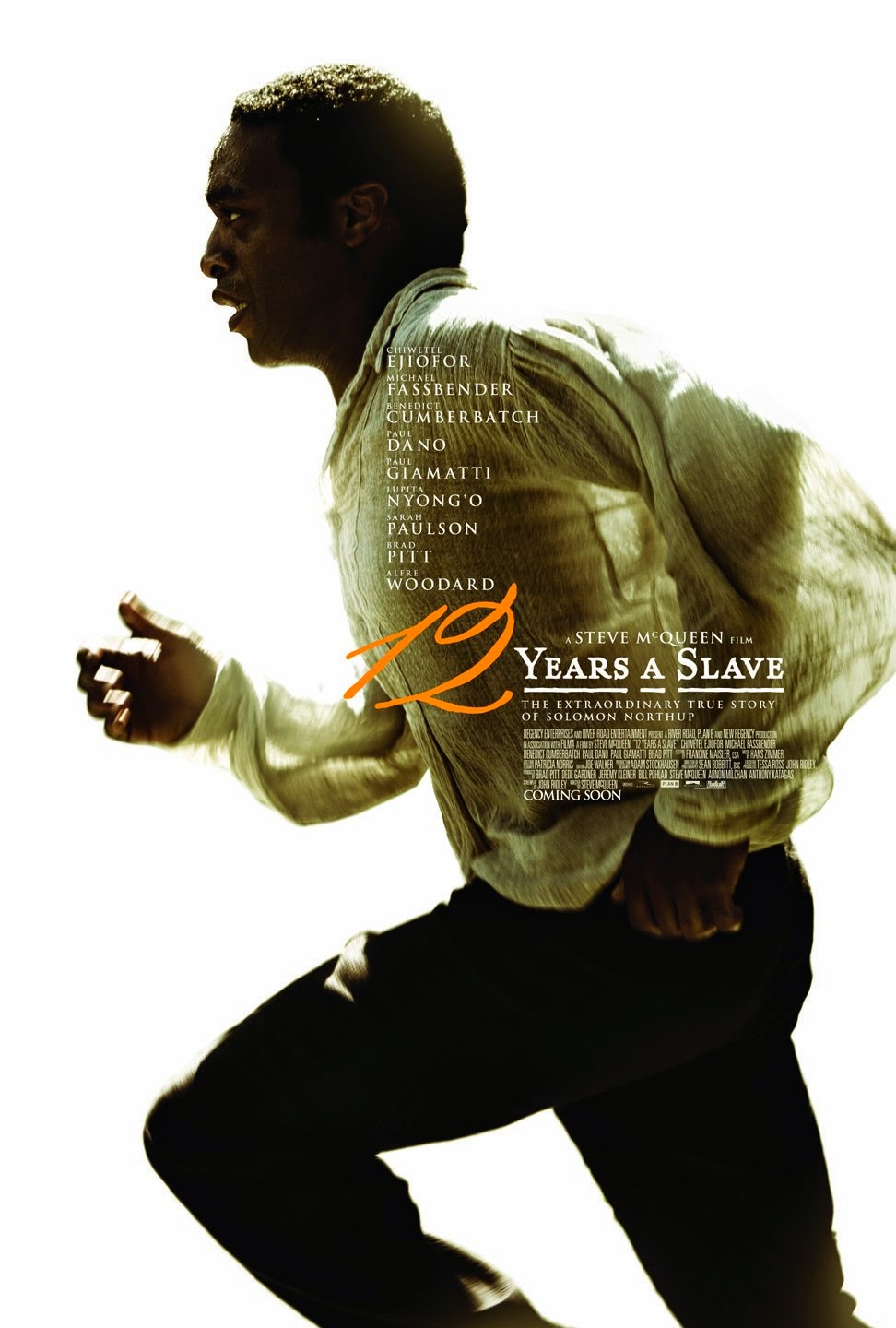 Phew!  Where do I begin?  This is easily one of the most emotionally exhausting films I've ever seen, and one of the most haunting.  I literally couldn't stop thinking about this film for weeks after I saw it, and when I got home from the theater that night I actually found it difficult to articulate how powerful it was.  Based on the autobiographical account of Solomon Northup's kidnapping/sale to the slave trade, 12 Years a Slave is an unabashedly brutal look at the single worst atrocity in American history.  No other cinematic depiction of slavery has ever captured in such detail the horrors of this shameful era.  Steve McQueen directed the film as though seizing the viewer by the back of the neck and pushing their face as close to the events as possible, shouting, "No!  Do not turn away, damn you!  You will look at this and remember what happened!"  The film is full of amazing performances, in particular Chiwetel Ejiofor as Solomon (Pay close attention to the scene in which Solomon finally, reluctantly succumbs to the crippling sorrow of his situation, joining the other slaves in song after burying a fellow prisoner -  the expressiveness of his face is heart-wrenching), Michael Fassbender as the vile and deranged slave owner Edwin Epps (Fassbender reportedly passed out during one scene due to its emotional weight), and most strikingly Lupita Nyong'o as Patsey, Epps' prized but maltreated slave (She absolutely disappears into the role and her character bears the worst of all the offenses committed in the story).  Rarely does a film come along that is so historically important, so powerful, so emotional and at the same time so perfectly written, acted, photographed (some of the images are breathtaking), and scored (Hans Zimmer once again defies convention with an absolutely wonderful score).  In the annals of great cinema, 12 Years a Slave is a bona fide classic.