I saw an amusing Facebook post after last night's FastLane PPV that read "Apparently FastLane should be renamed MakeRomanLookStrong."  We're back in familiar, depressing territory regarding the build to WrestleMania.  Once again Vince McMahon is hell-bent on Roman being the man to carry the brand through the next decade, but just like last year there's one major problem: He's the only one excited by the idea.  It's really staggering how willfully ignorant Vince is of the crowd response to this guy.  Literally the only time Reigns was over in a way befitting the top babyface was last December, when he'd been screwed over one time too many and snapped, beating the everlovin' shite out of Triple H and regaining the WWE Title the next night on RAW.  For that 24-hour period Reigns went back to being the taciturn, asskicking machine in whom the fans were emotionally invested. 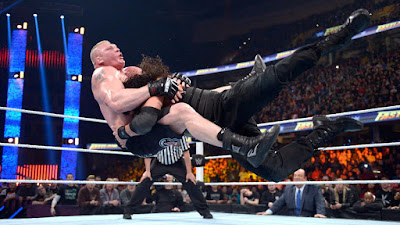 From there Reigns should have gone on a year-long Championship tear, destroying every heel in sight and saying very little.  Instead though, within a month it was back to awkward promos and an overly vulnerable character presentation.  Roman Reigns is not John Cena and therefore can't cut strong WWE-style promos.  Nor is he Daniel Bryan, whom the fans rallied behind no matter how long the odds against him.  Shoehorning Reigns into either of these babyface archetypes hasn't and will never work.  The fans don't see him that way and have no desire to.  Need further proof?  Look at the crowd reaction he got last night after defeating Brock Lesnar and Dean Ambrose (both infinitely more popular than Reigns).  It was a lackluster, mixed-at-best reaction with at least a couple dozen fans visibly throwing thumbs-down signs.  What world does Vince live in where this looks like the conquering hero just won the big match on the way to his defining WrestleMania moment?

It didn't help that Reigns was in there with the two most popular active wrestlers in the company.  Vince is delusional if he thinks Reigns' crowd support was ever strong enough to withstand that situation.  They probably should've booked Sheamus stronger over the past six months so it could've been Reigns vs. Lesnar vs. Sheamus.  Then at least the one heel Reigns actually got cheered against would've been present.  Hell, they could've even set up Lesnar vs. Sheamus at 'Mania.  But no, let's keep Ambrose close to the situation so everyone's reminded how much more exciting the product would be if Vince's trousers grew tight over Dean instead of Roman.  The phrase "tone-deaf" gets thrown around a lot when talking about WWE's booking, but it really is like Vince is living inside a bubble.  Literally all he sees when he watches his own show is Roman punching and spearing people.  He ignores the crowd response, the ratings, the choice of opponent (Christ, even Triple H is gonna get cheered over Reigns at 'Mania, and he's the company's top heel) and just sees MUSCLES.  I wish I could sit in on some of these booking meetings; does not one single person question the guy?


Years ago the company signed a young blue-chip athlete and right away they saw big money with him.  He had the look, the pedigree, the sports background; he was the perfect choice for the next big star.  Problem was the fans didn't like him.  At all.  The guy got booed like crazy, and the company was forced to call an audible and turn him heel.  And what happened?  He got massively over and became the coolest character in WWF history.  And when he turned babyface again his popularity soared and he transcended the business like no one else had.  Yet a year ago the fans hated Roman Reigns so much, even that ultra-cool babyface got booed standing next to him.  I'm pretty sure the company's going to that well again at 'Mania.  I'd bet real money they plan on putting The Rock in Roman's corner, hoping the fans will do what they're told this time.  And I'd bet real money it fails again.  Triple H, despite being an on-air mega-heel, is very well-respected, particularly for his work in building the NXT brand.  The WrestleMania audience is one of the smartest of the calendar year; shoving Reigns down their throats against the guy they see as WWE's eventual savior isn't going to go well.

All this would be moot if a Triple H-Roman Reigns main event were an exciting prospect.  But sadly it isn't.  I'm as disinterested in this match for the 'Mania headliner as I was for Cena vs. Triple H ten years ago.  Similar situation really - Triple H vs. Vince's pick for the top babyface, whom the fans don't really like.  The difference is Cena had the WWE promo ability and undeniable charisma to overcome that and at least win over the casual fan.

So how 'bout FastLane itself?  Well the show was fine.  There was a lot to enjoy and several quality matches.  There was also an interminable Edge & Christian segment that literally served no purpose except as a plug for their show (Again, that's what RAW is for), for which the US Title match got bumped to the Kickoff.  I legit don't understand the thought process of these people.

Anyway, it was refreshing to see a women's match open a PPV and get ample time to tell a story.  The crowd was into Becky and especially Sasha, and I like where the Divas Title picture is going.

The Intercontinental Title match was quite good.  Owens and Ziggler work really well together, and if Ziggs were at all presented as a credible threat this would be that much better.  Let's hope Owens gets a singles match at 'Mania - he deserves a prominent spot.

The six-man tag was what it was.  I cannot for the life of me figure out why you'd book the Wyatts to lose clean, especially when a) you're planning on Brock vs. Wyatt at WrestleMania and b) some part of your brain thinks Braun Strowman's gonna be a huge star.  This made zero sense.

The Charlotte-Brie match was very solid.  A few miscues but Charlotte's really come into her own as a top-level heel.  She OWNS that persona and carries herself like a megastar, not unlike Ric.  Brie's little tributes to Daniel Bryan were a nice touch.

Arguably the standout of the night was the AJ Styles-Chris Jericho rubber match.  They got more time than their free TV matches, and in fact more time than anything on this show.  This match more closely resembled AJ's stellar work in New Japan than any of his other WWE matches thus far.  It seems like he's still adjusting to the WWE environment though.  I got the impression Jericho was calling the match and still wasn't used to AJ's unique moveset.  But overall the match was quite good and put AJ over nicely.  My one major gripe however is that no one, NO ONE, should be kicking out of the Styles Clash this early in AJ's run.  That move was one of the most well-protected finishers in New Japan, and WWE needs to have more respect for that.  Seems like WWE prefers the Calf Crusher as his primary move, but that's insane to me.  Obviously AJ won't be able to hit the Styles Clash on larger opponents, but it should still be a protected finisher.  Anyway, a strong effort by both guys and I hope AJ gets a big 'Mania spot. 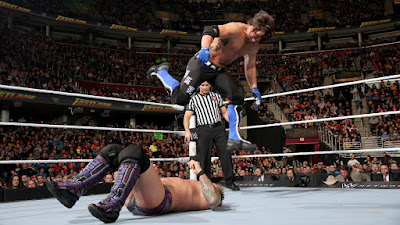 The main event was highly entertaining but had all the usual shortcuts of every Reigns main event.  The most intriguing aspect was the Lesnar-Ambrose interaction; I know Bray Wyatt is currently penciled in as Brock's 'Mania opponent, but Vince is certifiably insane if he doesn't give us Brock vs. Ambrose instead.  The story of a crazed smaller wrestler who isn't at all scared of the monstrous Lesnar is so much more interesting than watching Wyatt come up short at 'Mania yet again.  That would at least be a semi-main event fitting of "the biggest WrestleMania ever."  As for the finish, you know my thoughts about Reigns, but did they really need for Reigns to no-sell three chair shots on his way to winning?  Christ.

Overall FastLane was a solid night of wrestling but once again I was left emotionally cold.  I have so little interest in most of what's happening with this product that despite the impressive in-ring action I feel unsatisfied when it's all over.  This WrestleMania season could be even more excruciating than last year's.  WWE's only hope will be to stack the undercard with loads of great in-ring matchups to make up for the lack of star power or interesting feuds.  As of right now the Divas Title match is the only thing I'm looking forward to.  Let's hope WWE can figure this crap out, and quick.
Posted by Justin Enuffa Ballard at 11:21 AM