I'd Like to Introduce You To: Under the Skin

Welcome back to Enuffa.com, where we once again present I'd Like to Introduce You To.....from Michael Drinan.  It's a series dealing with lesser-known cinematic gems that you should go out of your way to find.

I love films that are very divisive with audiences.  It doesn’t even have to be great, just a really well made film will leave the audience split.  These kinds of films are great because there’s no grey area, you either like it or you don’t.  You either get it or it goes over your head.  The independent film scene really thrives on these types of films because they challenge their audience, forcing them to take in an unconventional film that is told unconventionally.  Sometimes it takes a couple of times to see it to help you decide, like 2001: A Space Odyssey was for me.  The film highlighted in this post is exactly THAT kind of film.  It’s confrontational, unconventional, introspective, contemplative and really fucking good.  And with that, let me introduce you to Under the Skin. 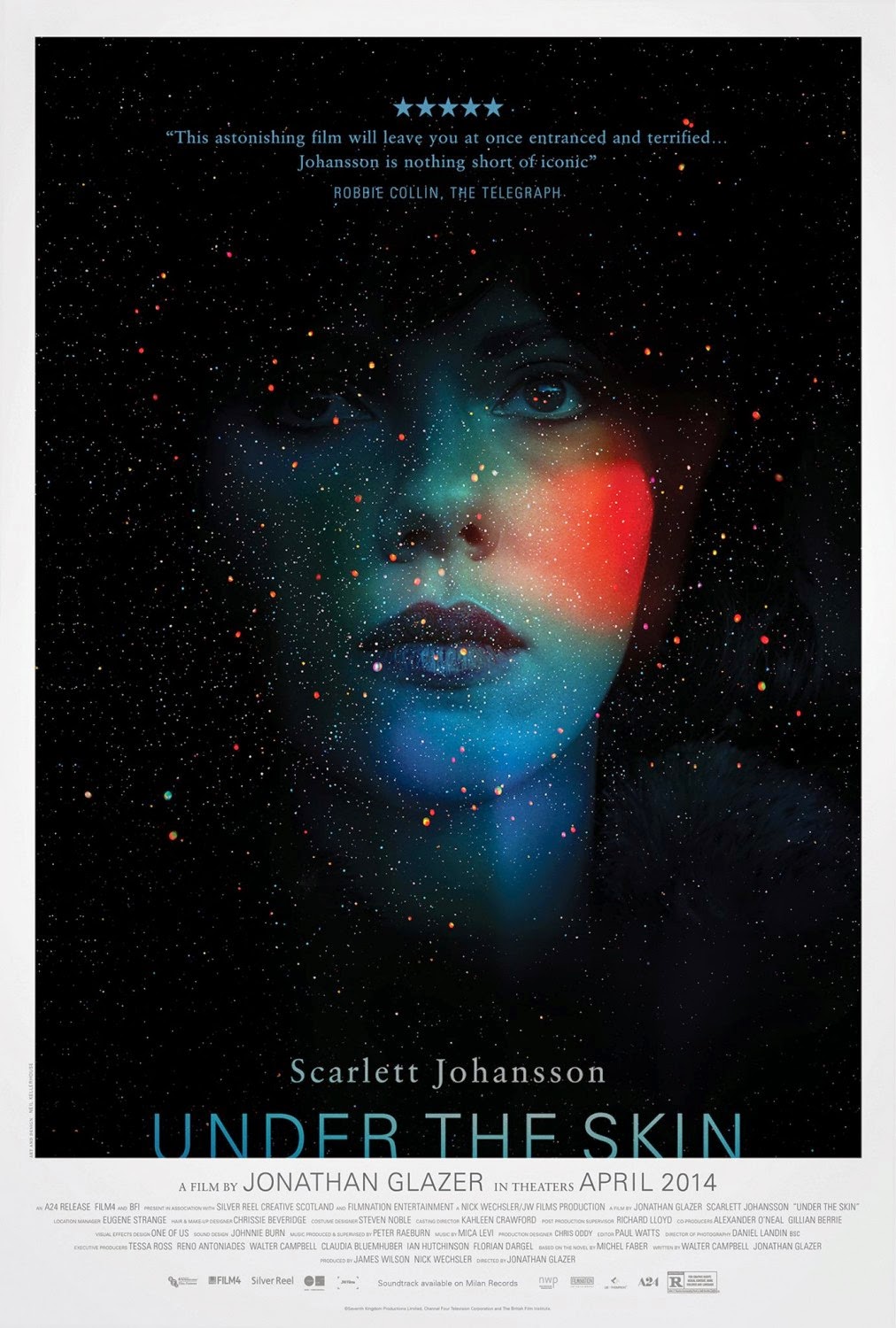 Science fiction can be a daunting genre for some.  Those who say they are fans of science fiction because they like the Star Trek and/or Star Wars franchise will get weeded out quick with a film like this because its not a stereotypical sci-fi film.  Okay sure, it has an alien but most science fiction flicks take place on/in/among other worlds, not just on Earth.  What makes this a science fiction film is that you’re looking at Earth and it’s inhabitants from the perspective of the alien, one that has its own agenda or mission.

It stars Scarlett Johansson as an alien (she isn’t given a name in the film but is credited as “Laura” however the alien’s name in the book is “Isserley”) who takes the form of a female seductress and hunts down lonely, unattached men on the streets of Glasgow, Scotland to farm them for her home planet.  Once she has her prey, she takes them back to a house where she lures them into a swamp like liquid where they are devoured.

Fun Fact:  Most of the men she picks up in the film are not actors but are real everyday men who were not aware of their involvement in a film until afterwards, an attempt by the director to get real to life interactions between the men and the mysterious woman who picked them up.

The film is a statement of the world and of human nature.  It uses the alien to make this statement as it shows her going through a transformation from an emotionless, alien killer, to wondering what its like to be human and how to actually feel.  This all leads to an eye opening discovery at the end.

I mentioned 2001: A Space Odyssey in the beginning of this post because that’s exactly what it reminded me of when I saw this film.  There isn’t a lot of action in the movie, its slow and methodical.  The story and its accompanying statement is subtle and embedded in the actions, behavior and dialogue of the characters.  If you’re looking for a hint as to what the point this film makes...pay attention to the dialogue.

Johannson puts on a hell of a performance, albeit subtle and low keyed, unlike any she has ever done before in her career.  Its her facial expressions that win it for her in this film, each time the alien comes to a sort of epiphany on human nature.  The scene with the man who has a disfigured face (his name is Adam Pearson, google him, very interesting guy living with Neurofibromatosis) is the turning point for Scarlett’s character and for the film.  She doesn’t comment on his disfigurement but instead compliments his hands.  Where this alien was an emotionless killer, at this point she begins to sympathize with this man and everything subsequently comes to a head as a result.

More times than not, you will be like me while watching this film, constantly asking yourself “what the hell is going on with this movie?” or “who the fuck are these biker guys?” but don’t let it discourage you.  These films are made to challenge you and to pry you out of watching conventional films.  It doesn’t make it easy, the plot is not blatantly laid out for you.  It makes you work for it.  Stick it out and it rewards you with the point its trying to make, which will hit you like a mack truck.

Under the Skin is currently streaming on Vudu, ITunes and Amazon.  Blu-Ray release on July 15th.

Check out the trailer

UPDATE: Now that I've seen Under the Skin, I figured why not discuss my experience with Mike.  So here goes....

Justin:  Watched Under the Skin last night.  Not sure yet how I feel about it.  It was definitely interesting and had some very striking imagery (several shots/scenes reminded me of both Mad Max and An American Werewolf in London - I wonder if that was deliberate).  I did find the meditative pace trying at times and thought maybe the film was too understated.  I think I'd like to have seen a bit more of the workings of her lair and the aliens' motivation for doing what they did.

If nothing else it's certainly a unique take on that type of movie.

Mike:  When I walked out of the theater I hated the movie but when I began talking to my wife about it I started slowly changing my opinion on it.  It is definitely a movie that is understated, great way to describe it.  I think that's the reason I liked it.  It would've been better to see a little more of the aliens' side of things, might have helped audiences understand what is going on, especially that guy on the motorcycle that goes all over the place.  From what I hear, the book delves more in depth with the aliens, not sure in what ways but there is more information in the book.  I do plan on checking the book out at the library to see the differences.

Justin:  The book is very different from what I understand.  Essentially only the overall premise is the same.  The approach is much more literal in the book so things are explained more clearly (almost like the differences between 2001 the movie and 2001 the book).

I kinda feel the same way.  I definitely didn't hate the movie after watching it but my immediate reaction wasn't "enjoyment" per se.  But it's a movie you can't help pondering extensively afterwards.  I felt the same way about The Tree of Life actually (which I consider kind of a failed masterpiece).  Had a hard time sitting through it but couldn't stop thinking about it the next day.

Mike:  In terms of the science fiction genre, how do you view the film?  There haven't been many science fiction films like this to have come out in the past 20 years or so.  Off the top of my head I can come up with Moon (which was incredible) and Children of Men, if you count that as sci-fi.  I mean, you have the Star Trek movies and Star Wars and all that, but Under the Skin, Moon, Children of Men seem as if they're on a different level from them.

Justin:  It's more of a sci-fi-as-art kinda film.  Like Moon or 2001.  Yeah there aren't many films like that (probably because mass audiences have short attention spans and like their sci-fi full of stuff getting blowed up real good).  Just look at how different the current Star Trek movies are from the real ones.

It's even hard to classify it as sci-fi.  It's more of an introspective character study disguised as a sci-fi film.  You could turn her into a human serial killer/assassin for hire and basically have the same story.  She'd just be a human who is either insane or just so detached from the rest of humanity that she can't relate to other people, and her arc is a failed attempt at redemption/reconciliation with the rest of humanity.
Posted by Justin Enuffa Ballard at 10:05 AM