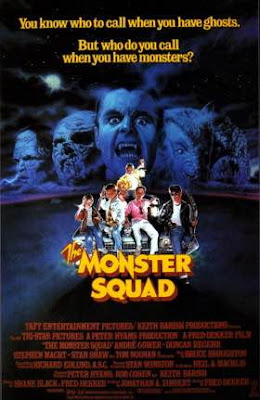 After viewing the despicable Cannibal Holocaust yesterday, I had to cleanse my pallet. I needed something easy to watch. Something fun. Something with nards. Yes people, the time had come for The Monster Squad. A true classic from my childhood. It's about a bunch of misfit kids fighting off the re-imagined Universal monsters. But you know that already, right? Because if you haven't seen this flick at least 100 times, GET THE HELL OUT OF MY OFFICE!


When Dracula comes back from the dead (as he somehow always does), he gathers up his monster buddies, the Mummy, the gill-man and Frankenstein. The only ones who can stop them are the aforementioned Squad, consisting of leader Shawn, sidekick Patrick, Fat Kid (the fat one), cool dude Rudy, and Shawn's adorable little sister Phoebe. She was so cute in this movie. I wonder what she looks like now?


The movie is a fun romp as these kids try to figure out ways to eliminate the monsters, who are the real stars of this movie, obviously. The special effect makeup work is incredible in this movie. The re-imagined Creature from the Black Lagoon looks phenomenal. He actually looks like a legit fish man. The Wolf Man is also awesome-looking. He's got a badass transformation scene in a phone booth which looks both scary and painful. I've loved this movie since the first time I watched it. This most recent viewing changes nothing. This flick is great and truly one of my favorite "older" kid-type movies. Watch this with The Goonies and you've got the ultimate kid movie double feature.

THE BAD: HOW DARE YOU!

THE DUMB: if Rudy is such a badass, why is he traipsing all over town on a fuckin' Huffy? Loser.

SHIT OR HIT: Hit, to the nth degree.
Posted by Justin Enuffa Ballard at 8:58 AM