NXT Takeover: Respect Thoughts, or How Sasha vs. Bayley Rocked My Socks Off

I realize I'm a tad late to the dance, but I just watched last week's NXT Takeover: Respect over the weekend and wanted to say a few words about the absolutely brilliant Women's Title main event. 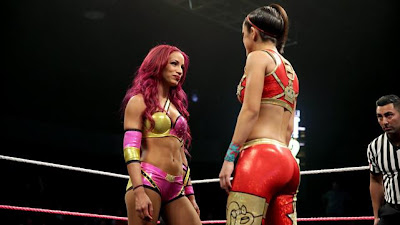 Overall I'd call myself something of a casual NXT viewer.  I tend not to watch the weekly shows and only vaguely follow along with the results.  I do watch the NXT Takeover specials, but usually not live as they're happening.  Don't misunderstand me, I very much enjoy NXT as a brand; they get right everything the main WWE roster gets wrong and Vince should really be using them as a template for RAW and Smackdown.  However there's so much wrestling out there right now it's so hard to find the time to watch any of it religiously these days.

NXT Respect was the first time in WWE history that a major event was headlined by a women's match.  Unlike with the main roster, the people running NXT understand that women's sports are becoming a huge draw (Ronda Rousey is currently the biggest star in UFC), and people are tired of female wrestlers being presented as little more than eye candy in piss-break matches.  Yes, the main roster has been making the effort with the Divas Revolution and all, but let's be frank - given how sloppy that's been thrown together (multiple call-ups at the same time, group feuds that don't make any sense), it kinda almost seems like those in charge of the main roster (Vince and Kevin I'm looking in your general direction) are setting it up to fail.  It speaks volumes of how out of touch certain people are when the company is so far behind the curve on this.  Christ, TNA figured out almost a decade ago that women's wrestling could be a lucrative, exciting part of their programming.  How is WWE trailing TNA on this??


At August's NXT Brooklyn event, perennial underdog and crowd sweetheart Bayley finally unseated the arrogant blue-chipper Sasha Banks to capture the NXT Women's Title.  The match, like several NXT Women's Title bouts before it, absolutely stole the show, and elevated both participants like crazy.  The story coming out of that match was Sasha's newfound respect for her former ally, thus reframing this feud as two women with mutual respect locking up in a grueling 30-minute Iron Man match to determine who really is the best.  Simple, to the point, easy to understand, even for someone who hasn't been watching NXT on a weekly basis.  When storylines are presented like this in wrestling you really can't go wrong, and this is something that got lost in the Attitude Era.  A casual fan flipping through the channels should be able to stop on a wrestling show and on some level understand pretty quickly why two people want to beat each other up inside a ring.  All the contrived window dressing with authority figures, love triangles, dual personalities and the like makes it nigh impossible for anyone not already following the product to get invested in what's happening.

The first ten minutes or so of the match consisted of beautifully executed, purely scientific grappling with everything on the up-and-up.  Then Sasha began to get frustrated and we saw her old heelish self poke through as she blocked the referee's line of sight and used an eye gouge, followed by a rollup for the first fall.  This was so simple and brilliant it reminded me of a Ric Flair tactic.  From then on Sasha was in full Villain Mode, going out of her way to hurt Bayley for her presumption at thinking she was in the same league.

Bayley tied the score a few minutes later, but soon Sasha really took over on offense, dominating her outside the ring.  And then came the emotional blasting cap.  Seated at ringside were members of Bayley's family, including Bayley's superfan Izzy (a girl of about eight).  At one point Sasha took a break from pummeling Bayley to talk some trash (or smack, whatever you prefer) right in Izzy's face (and steal her headband), and Izzy began sobbing.  Now, I dunno if this was planned or not (It looked legit; this girl was heartbroken), but this was such an amazing little moment to emotively electrify this match.  When watching any sort of storytelling as adults many of us wish we could experience these things as children again, and for me this moment provided that sensation.  The second half of the bout was as emotionally affecting as any wrestling match I've seen since Flair vs. Michaels at WrestleMania 24.  From Sasha's sadistic offense to her desperation at not being able to put the match out of reach, to Bayley reaching her snapping point and trying to injure Sasha's hand (an awesome callback to the previous bout), to the last few minutes where both of them could barely stand, when this match was over I felt like I'd been wrung out.  Every second of this felt urgent and genuine.  This was very likely the best women's match I've ever seen, and easily a Top 5 WWE Match of the Year.

The post-match celebration was even more poignant, as both women were presented with flowers and Sasha, in tears, collapsed in the aisle, conveying exhaustion, heartbreak at coming up short (not unlike Okada's brilliant post-match selling at WrestleKingdom 9), and finally a sense of overwhelming pride at having been part of a truly special, groundbreaking moment.

I've been a wrestling fan for 29 years now, and it's rare for me to be as emotionally engaged as I was during this match.  It was a combination of deep admiration for both of these athletes (especially Sasha, she's as good at what she does as just about anyone in the company), the riveting story being told, and the fact that such a huge barrier was broken in mainstream pro wrestling.  A Women's Title match was the main event of a "PPV" (Yeah I know it wasn't technically a PPV event, but whatever).  That's an absolutely huge moment in this business.

There's an old saying in wrestling that "the title doesn't make the man, the man makes the title."  At NXT Respect, two women MADE a Title arguably the most prestigious in NXT.
Posted by Justin Enuffa Ballard at 10:53 AM