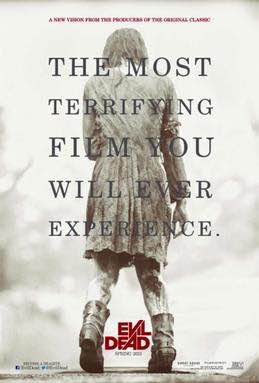 Ah, the Evil Dead. A franchise that has stood the test of time based essentially on the awesomeness of its hero, Ash Williams (played by the incredible Bruce Campbell). I can remember renting Evil Dead 2 from Blockbuster (I'm old) one Halloween with my friend Mike Dudas. We were expecting a horror, scare fest. What we got was a slapstick splatter movie that had us cracking up and required multiple viewings immediately. We rented the original and found the scare fest we were looking for. So when I heard of this remake a couple years ago, I was weary. I've been bored with most remakes, and I've cautiously stayed away from this one, until now. How wrong I was.

This movie was AWESOME. A continuous gore fest, Evil Dead has the same set up as the original two films. A couple of kids go to a remote cabin for a weekend and terror finds them. This time, Mia (Levy) is a drug addict trying to break the habit. She's taken to their family cabin by her brother David (Fernandez) and their friends so she's away from society and can beat the addiction.


That's really all the setup you need for this flick. You just know something awful is coming. After a bit of slow start setting up the situation, once the evil spirits take over, it's an unrelenting hour of gore, scares and plain awesomeness. Using all practical effects really makes the film special as well. So much better than fake looking CGI horror. The realness of it is truly conveyed through these actual effects. The violence is insane. There's amputations, people pulling their faces off, needle stabbings, and that's all before anyone gets bumped off.

The cast is quite good. Levy is put through the ringer in this film, and handles it all marvelously. She goes from the fractured, drug addict to possessed demon in the blink of an eye and it's cool to see. As her brother, Fernandez does a great job of being both her protecter and assailant. It all works perfectly. The cast knows how to get from being scared kids to hardened demon killers.

THE GOOD: Everything. The cameo of original director Sam Raimi's 1973 Oldsmobile Delta 88 was a nice touch. It's also cool because it suggests this is in the same universe as the original flicks, so a meeting with Ash is possible (in fact, stay for the credits...)

THE BAD: The ending feels a tad disjointed. It's like they had all this awesomeness but didn't know how to stop it. Not that the ending is bad, it's violent and cool as shit. It just seems like it doesn't belong.