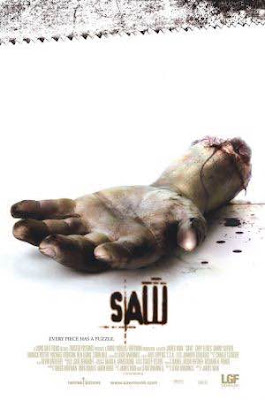 This is not a good movie. It has terrible acting, God awful production value, and one of the most improbable plot twists in movie history. And I love every fucking second of it.

The first in a series of one of the most successful horror franchises of all time, Saw was not at all the type of movie I thought I was going to see alone (shut up) in the old Quincy Center movie theater. From the ads on TV, it played like a ripoff of Se7en. I really didn't foresee the bloody, gory horror movie I was in for. Adam (screenwriter Whannell in his only notable role...seriously, he's awful) and Dr. Lawrence Gordon (Cary Elwes, on a vacation from acting) are trapped in a basement by Jigsaw. He's a non-serial killer, a mysterious dude who goes around kidnapping folk he thinks take their lives for granted. He subjects them to "tests", typically giant torture devices rigged to kill the subjects if they fail to complete 'em in a certain time period. The Doc and Adam gotta get outta the basement or the Doc's family dies.


The premise is great. Two dudes wake up confused in a basement.  The execution is also good. I was on edge the first time I saw this movie. The suspense was killing me...I hoped it would last. I wanted to know what they were trapped for. Who trapped them. And how they would possibly get out. *SPOILER ALERT FOR AN ELEVEN YEAR OLD MOVIE* When Dr. Gordon inevitably, predictably starts sawing through his chained up ankle to remove himself from his basement prison, I was gnawing at my knuckles. I knew it had to happen too, by the way. They mention it like seven minutes in. The whole movie built up to it. But it played out so perfectly that, even when I knew it was gonna happen, I was still ultra-skeeved out about it. It was an amazingly intense moment. It was beaten only by the fact that *SECOND SPOILER ALERT FOR AN ELEVEN YEAR OLD MOVIE* the fucking dead guy in the room was fucking faking it the whole fucking movie and was the fucking killer the whole fucking time!

Listen to me. I was alone in this movie theater except for an ancient Asian lady in the row in front of me. When that supposed dead guy stood up after laying in a pool of blood the entire run time of this flick, I stood up and said "Holy SHIT lady, are you seeing this!?!?" (She promptly left). I was hooked. And I've watched each Saw movie multiple times. Stupidly fun to watch. Love these flicks.

THE GOOD: Billy the puppet. The psychotic traps. The insane and truly unbelievable plot twist.

THE BAD: These are professional actors. Christ, Danny Glover at one time was box office gold. They completely phone it in. I think they telegraph it in. God awful acting.

THE DUMB: Probably the worst overacting in the movie is Adam when the lights first go on in the basement. He acts like his face is hitting the sun. For fucksake, those guys in the mines in Chile didn't recoil half as bad as he did.