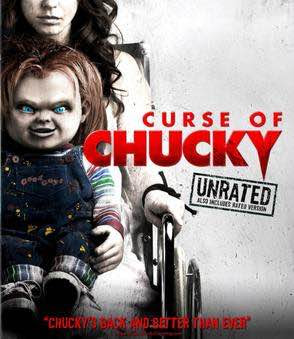 I was ten years old when I saw the original Child's Play in 1989 (it came out in '88). I was at Timmy Bothwell's house for his birthday. His parents rented it from Video Paradise on Broadway in South Boston. All my little friends watched and laughed along. I did too. But I was scared shitless. That little doll wreaking havoc all over the place frightened me, mainly because I had a My Buddy doll at home. He resided in the basement for his life's duration after seeing this flick.


Chucky always had a special (albeit terrified) spot in my heart. He genuinely scared me. As the sequels came and the quality fell, he became a more comedic foe. I enjoyed Bride of Chucky, but I missed his truly evil ways. His wisecracking persona was fun to watch, but he wasn't scary anymore.

Well, scratch that. Scary Chucky is back. And he's great. In this newest sequel, Chucky finds himself mailed to the home of a paraplegic girl, Nica and her mother. After her mother's untimely death, Nica's sister and her family show up to put family business in order. What follows is a tedious 45-minute buildup to what we're all really waiting for, Chucky's next massacre. It may seem like the director is building up tension, but it's really an endurance test to get through. I almost gave up. Thankfully I stuck it out.

When Chucky finally gets going, the movie hits its stride. Brad Dourif is as excellent as ever as the diminutive serial killer. It's a role he's played for almost thirty years, and he knows what he's doing. In the role of Nica is his daughter, Fiona. I was thinking this was going to be a case of nepotism, but the young actress is quite good. She's a strong character, and a good foil for Chucky.  Her other family members, however, are quite forgettable. Simply cannon fodder for our favorite Good Guy doll.

The last 45 minutes of this movie are quite enjoyable, with the kills coming fast n' loose. Nothing too over the top; more like the 80's slasher flicks Chucky was born from, and that's totally fine with me. It was an old school-style romp, and having the evil, menacing doll back was a welcome treat. Mancini even adds in some post-credits sequences tying up loose ends from the previous films, which was awesome to see. Hopefully there's more Chucky coming sooner rather than later.


THE GOOD: Evil Chucky, back, and as good as ever.

THE BAD: The setup in the first 45 minutes is pretty boring. Chucky's barely in it, and the underwritten family characters don't have enough going on to hold anyone's interest.

THE DUMB: Just your standard horror movie cliches. Going to the attic alone while the power is out. "Alice, is that you? Alice, are you up here?" It's so old and played out.

SHIT OR HIT: Hit. Go check out Chucky. He's your friend to the end.
Posted by Justin Enuffa Ballard at 2:20 PM