31 Horror Movies in 31 Days: The Taking of Deborah Logan 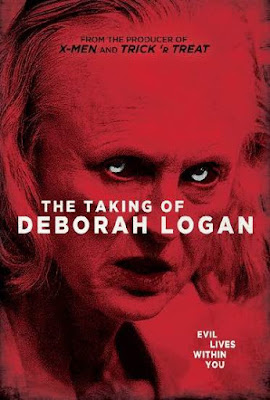 Another in the found footage genre, The Taking of Deborah Logan is a derivative, boring horror movie. A documentary team is researching Alzheimer's and start filming the elderly Miss Logan, who doesn't want to be filmed.  Her daughter reminds them that they need the cash the documentarians are paying for the film. She displays more and more odd behavior, which culminates in a mishmash of a possession plot, demons,  haunted house and monster movie.

To me, it felt like the writer and director thought of every horror movie trope they knew, framed it with some weak found footage idea, threw it at the wall, and wanted to see what would stick. None if it does. It's not scary, it's way too predictable, and the big scare at the end, which they build up to for quite some time, is laughable when it's on screen. The build up to it was ok, but Jesus, I laughed audibly at the most scary part of the movie. That's not good.

THE GOOD: Anne Ramsay as the exhausted, desperate caretaker/daughter is very good in this movie. You may remember her as Betty Spaghetti from A
League of Their Own. The cinematography wasn't as bad for a found footage flick as some others. No real jarring film moments to make you feel
sick.
THE BAD: The plot. The supposed scares.
THE DUMB: Laughably bad special effects at the end. I mean, like Ed Wood bad.
SHIT OR HIT: Shit. Total shit.
Posted by Justin Enuffa Ballard at 7:46 PM