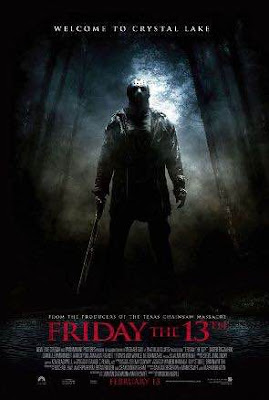 I love me some Voorhees. When this reboot came out, it was one I was actually looking forward to. The man in the hockey mask has been a staple of my horror movie viewing for as long as I can remember. I was hoping this movie wouldn't disappoint. It didn't.

A combination of essentially the first three Friday movies, this new generation version comes outta the gates hot. It dispenses with the Mrs. Voorhees killer quickly, and moves on immediately to our favorite homicidal goalie. Jason is your standard isolated murderer, just wanting to be left alone in his campgrounds. When some uppity teenagers try to steal his weed, he slaughters them all, save one. A young lady that reminds our little mama's boy about his mama. So he keeps her, setting off our plot of a new group of teens going to look for their kidnapped friend.


I enjoyed everything about this movie. The heroic brother character, the cliched dickhead rich kid, the naked boobies of Willa Ford (ugggggghhhhh), and the large, hulking new version of Jason. Sure, the plot is essentially the same as all the other Friday flicks, but there's only so much you can do in the slasher genre reboot machine. The kills come fast and gory. Even if you hate any of the characters, don't worry. Chances are, they won't be around long enough to annoy you. Just buckle up for a fun slasher kill 'em all movie, and you won't be disappointed.

THE GOOD: I liked seeing good ol' Jason in a new, updated movie. It's cool watching a relic of the 80's killing folk in the now.

THE BAD: Willa Ford shoulda lived longer so we could see more of her boobies.


THE DUMB: The ultra-annoying stoner characters. Again, as I said, they don't last long,,but man are they a bane to this film's existence.