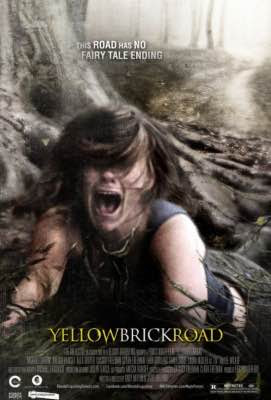 Solid premise to this one. During WWII, the population of a town in New Hampshire just ups and vanishes. They walk up a mountain trail and disappear into the woods, like a bunch of untrained Bear Grylls (so just like the real Bear Grylls). Decades later, an expedition is set up to see what happened to these meandering folk in the wilderness. While this group treks out there, some sort of strange music is heard the whole way, confusing the group's navigation and  driving certain members of the party nutso. They either off themselves or others. This first hour is really cool. I bought into the whole concept. The freaky music was eerie as shit. It was very unsettling and had the perfect effect for a horror movie.


And that's about all that's good. I'll save you some time: nothing happens from there on out. For the rest of the movie, they're walking lost in the woods and crying. It's like that time I was in camp. Nothing is revealed. There's no answers to the weird music, no answers to why people are going schizo, and no answers as to why the original town folk left and disappeared. Look, you wanna leave your horror movie ending so people are still asking questions, no problem, but for Christ's sake, give me SOME answers. Anything. Tell me it was a full moon, or Keyser Soze did it. Something, not just nothing.

THE GOOD: The plot setup is cool. And that sucks. The premise was very promising. I was intrigued and wanted to know why these people vanished. I'm a sucker for people mysteriously disappearing (My DVR is filled with Dateline episodes, most starring modern day Vincent Price, the great Keith Morrison).


THE BAD: The acting is pretty subpar. There's also a doctor on the team that tries to keep everyone sane each day with a series of questions. One of them is "Can you say the alphabet backwards?" And for the life of me, I don't see how that one helps. That would drive me completely bonkers. I can't do that at all. There's a reason they ask drunks that. It's fucking impossible.

THE DUMB: The non-ending ending. Just so annoying to take this journey of confusion and leave even more confused.

SHIT OR HIT: Shit. I ask you to skip this to avoid being frustrated. Go eat a snack on your porch. It's much more satisfying.
Posted by Justin Enuffa Ballard at 8:53 AM