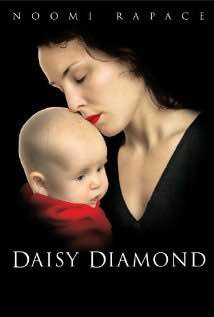 Wow. That was one tough watch. Technically not a horror movie, but if you watch this and aren't terrified, Alcatraz should be your summer home. This movie starts with intravenous drug use and a rape, and somehow the events that follow manage to be even more horrible.

The movie's about a young Danish girl named Anna. She's a single mother desperate to make it as an actress. She's having trouble landing paying roles due in part to her months-old daughter, Daisy, who cries constantly. In fact, this adorable kid's crying is essentially the movies soundtrack. She switches back and forth from loving mother to angry caretaker due to lack of sleep and stress. To reveal more of the plot is really giving away the rest of the movie. Rest assured, it's quite good but goddammit it's heartbreaking to watch.

That is mainly due to the incredible acting of Ms. Rapace. She gives a tour-de-force performance in this, which even comes through in the subtitles. She's amazing in this flick, and it's a good thing too, because she's legit in every scene. She has many long speeches in the movie that never feel forced. She's quite convincing as both the struggling actor and as the troubled mom trying her best to provide for her daughter. The love she shows for her baby followed swiftly by the obvious torment is an amazing switch she pulls off marvelously. But goddamn this movie is brutal to watch. The lengths to which she goes to achieve fame are awful. Truly heart wrenching stuff.

THE GOOD: Noomi Rapace. This movie makes what she went through in The Girl With The Dragon Tattoo look like a trip to Epcot Center. (BTW, did you know Epcot stands for Experimental Prototype Community of Tomorrow? Me neither. Cost me free wings at bar trivia the other night, dammit).

THE BAD: It's a real hard watch. It's not a bad movie, it's just bad for your feelings.

THE DUMB: There are scenes in the movie which delve into Anna's emotional connections with people but some are shown to be auditions for parts and some aren't. I realize the point was to be ambiguous about which parts of her life were fiction and which parts were real. But it was jarring to get involved in a scene for it to be ultimately revealed as fake.

SHIT OR HIT: It's a HIT but don't watch this if you just had a kid, or have any hope left in humanity. Goddamn I need a shower.
Posted by Justin Enuffa Ballard at 8:42 PM