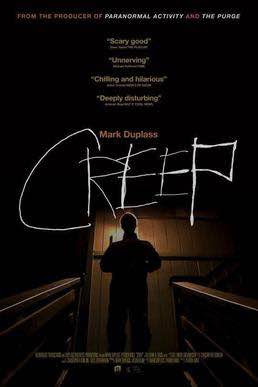 Creep is quite the oddball film. Aaron (Brice) is a videographer who answers a Craigslist ad to film Josef (Duplass, who plays Pete in the FXX comedy series The League). Josef is dying of cancer, and he's paying Aaron a thousand bucks to record a video diary for Josef's unborn son. They're camped out in Josef's remote wooded cabin.  What follows is a strange exercise in extreme creepiness.

Throughout their day together, Josef displays some truly bizarre behavior. He has Aaron film him during a bath. He dances around his house in a large wolf mask he calls Peachfuzz that he says he got from his father, but whose origins are much more sinister. You can tell right off there's something majorly incorrect with Josef. It's tough to tell what is truth when he speaks and what is lies. What follows is an odd Fatal Attraction-type stalker film. It's frankly, quite odd and true to the film's name, very creepy.


Seeing Duplass play totally against type in this movie is startling. I'm used to his smartass, goofy persona on The League. Watching him play this eerie, disturbed and finally menacing character was quite interesting. A lot of the dialogue is improvised, and he pulls it all off quite convincingly. He's done a fine job in this movie.

THE GOOD: Duplass and Brice play very well off of each other. The area they filmed this in is quite beautiful. Many lake shots and mountain views.

THE BAD: It's a very predictable ending. They mention and show a certain item numerous times throughout the movie. If you can't figure out why, you're not good at horror movies.

THE DUMB: The Peachfuzz mask is supposed to be scary. But it's not. It's a silly cheapo mask that would frighten no one.

SHIT OR HIT: It's a hit. A strange film to be sure but a different one than I expected.
Posted by Justin Enuffa Ballard at 3:15 PM