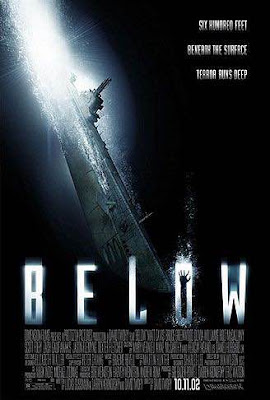 Setting a horror movie in a singular location is quite common. A house is your typical haunted setting. Below brings a very unique setting for the haunting. A World War II submarine is where things go awry here.  The submarine in question, the USS Tiger Shark, is on patrol somewhere in the Atlantic when they pick up three British survivors, two men and a woman (or as one of the crew puts it "Two teabags and a bleeder"). The woman, Claire (Williams) seems to have a bit of amnesia, and the commanding officer, Lt. Brice (expertly played, as usual by Bruce Greenwood) is very suspicious of the boat's new passengers. They're also being pursued by a German warship and that's when strange noises and occurrences start to happen. Is it a coincidence? Sabotage by the newcomers? Or something supernatural?

First and foremost, the cast is top notch. You'll probably recognize the vast majority of these folk as "that guys." All recognizable faces, and all pros. They all put in great performances (with a semi-serious turn from Galifianakis). I've been a huge fan of Greenwood's since I saw him on an old UPN show, The Nowhere Man. He's got this laid back, Everyman quality to his acting and he's a natural in this as the acting CO, who's only in charge due to the mysterious circumstances surrounding his commander's demise.


Director David Twohy, who also did Pitch Black, (which is quite a good horror movie in its own right), keeps the scares few and far between, but that's not a bad thing. The plot (co-written by Darren Aronofsky) is more of a slow burn. It builds up tension on multiple fronts, as the ship is being pursued by the enemy.  They also are trying to figure out what the hell is going on inside their boat as things go from bad to weird to worse. The body count rises and so does the pressure and anxiety. As the creepy noises and voices continue to be heard, you start to really wanna know what's actually going on here. I know I did.

THE GOOD: Excellent cast. The setting is cool as hell. The claustrophobic feel of the submarine adds to the haunted aspect of flick. The walls really feel like they're closing on the crew.

THE BAD: The script at times is too smart for its own time period. These guys are supposed to be in World War II, but the dialogue sounds way too contemporary.

THE DUMB: Nothing to report, sir.

SHIT OR HIT: Definite hit. Go under the sea with Below.
Posted by Justin Enuffa Ballard at 3:44 PM