After last week, me & Uncle Miggsy are feeling like Boba Fett, baby!

Two perfect people (except for Miggsy's baldness) and one sad, 2-for-3 performance from B-Cuddy
It's like he was watching as his most loathed friend went ahead and bowled ANOTHER perfect game. Stiff. Here's the thing about Brandon, he thinks he's all high and mighty, what with his fancy, girl-like time pieces and pants with no holes in the crotch. But he's just like an onion. The more layers you peel away, the more he stinks.

New York Jets (-2) @ London Dolphins THE PICK= JETS
I have no faith in the New York Jets franchise. No faith in ownership, coaches, Ryan "HAHVID DOOOD" Fitzpatrick, hell, I don't trust the fans to find their way to the pisshouse. And even with all that, I'm still picking them. Why? Him. That's why.


That man is a moron. He's ten pounds of suck in a five pound bag. I heard the thing he hates most in life isn't the terrorists, it's logic. And his players have caught on and hate him. They're on the roof top shouting out "Baby I'm ready to gooooo!" faster than Republica (Yeah, that's a 90s electronic British band joke. Eat it). They hate this dude, and want him gone. A nice blowout loss across the pond to a franchise whose fans need a guy to help them spell the team name at games just may be the last straw.

Oakland (-3) @ Chicago THE PICK=OAKLAND
According to my research (I googled "Oakland road favorite") it turns out this is only the second time since '05 the Raiders are the road favorite. I'm fully on this Derek Carr love fest. I think he's the real deal. He should have plenty of chances to sling the ball. Not because of Oakland's awesome defense but because of Chicago's woeful offense. I see Jimmy Clausen completing a lot of passes on Sunday...to guys in black jerseys. Clausen SUCKS. The Bears are in a lotta trouble. Not in just this game. No no. For YEARS. John Fox better get a fucking medic handcuffed to himself this season cause that son of a bitch is gonna need a full on heart transplant after a few games coaching these shitbags.

DAN'S DOMINANT PICK OF THE WEEK Carolina (-3) @ Tampa Bay
Yea, I know, that's two road teams on the week  (Jets/Fins doesn't count) but COME ON. In their last ten home games, Tampa is 2-8. TWO AND FUCKING EIGHT. I don't think Jameis is gonna turn things around right quick like. Carolina has been a covering machine lately. I'm thinking that continues on Sunday.

For those keeping score at home, I went 3 for 3 last week bringing my overall record to 6-3 on the season. That’s a .666 (THE NUMBER OF THE BEAST) winning percentage. We all know that the break-even point for any gambler is a winning percentage of .600 (.500 plus .100 for the vig). That means we are in the red for the season, or the black whichever one is the good one. You gotta let this sweet action ride.

New York Jets (-2) @ Miami Dolphins – NEW YORK JETS
Miggsy? A road favorite, how can this be? Well it’s not technically a road favorite because this game is being played in foggy London town. The Brits have this sort of air of superiority to them, much like guys from Harvard. The QB for the Jets walked the hallowed halls of Harvard (alliteration on fleek) while the QB for the dolphins went to Texas A&M, the same place as ex-team money leader, Johnny Manziel. Advantage J-E-T-S, jets jets jets. So cook up a big ole plate of bangers and mash for breakfast and watch the NY Jets run all over a woeful Miami team whose only win has come one the road against an even worse Redskins squad. I can use the term Redskin, right? My brother Scotty Pickles almost married one for Chrissake. That practically makes me part of the tribe.

Kansas City Chiefs @ Cincinnati Bengals (-4) – CINCINNATI BENGALS
Kansas City is simply allowing too many points per game. They are coming off a short week and have to take on another high powered offense. KC allows 29.7 pts per game vs Cincy who only allows 18.7. That’s an 11 pt difference, more than enough to cover the 4 pt spread. Does anyone trust Alex Smith? He’s just a better looking version of Joe Flacco. That’s honestly the best thing I can say about him. He’s legit allergic to throwing wide receivers the ball in the red zone. That’s a hug part of the game he’s missing. I’d be remiss if I didn’t mention Andy Reid’s awful play calling/clock management/fat dumb face. He does, however, have the best "Punt, pass and kick" photo of all time. First ballot hall of fame funny. 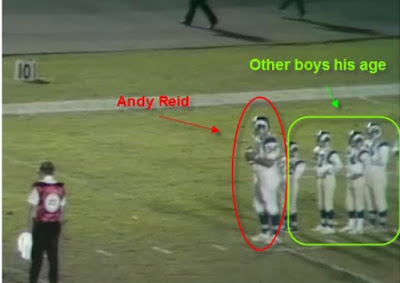 Miggy’s Monster Lock of the Week: Green Bay Packers (-9) @ San Francisco 49ers - GREEN BAY PACKERS
This time I am legit picking a road favorite. The average margin of victory for the cheeseheads has been 9.33 this year. Those wins came against some pretty good defenses, in particular Seattle. You know how doesn’t have a good defense? San Francisco. They are second to last in the league allowing 31 points per game. Their average margin of defeat is a whopping 32.5 pts. That’s ridiculous. Green bay scores an average of 32 pts pre game. Look for that number to go up after this week as Aaron Rodgers is going to pick them apart. Plus the 49ers coach is named Tomasula like George’s boss at Play it Now. “Hello Marjorie, George Costanza. How are ya sweetheart? Listen, can ya give Coach Tomasula a message for me? Tell him if he needs me, I'M IN MY OFFICE!”

So my counterparts in this horseshit contest both had perfect weeks. This was after I spent a paragraph criticizing them on their horrible picks thus far. So should I pump the brakes? Maybe calm the hubris this early in the season? Absolutely not! I’m not worried competing against these imbeciles. They stink. They stink real bad. You can chalk last week up to the blind squirrel theory. That’s all they are. Two chubby, blind squirrels. I could have had 4 points too, but I made the inexcusable move of picking the Jets. There’s no defending it. Picking the Jets is like choosing to sleep with Dan or Miggs on purpose. You know you shouldn’t do it. You know there’s a letdown looming. And afterwards, you feel ashamed and stupid. All you can do is reevaluate the choices you’ve made, and learn from your mistakes. On to the picks.

Houston @ Atlanta (-7) – The Pick = ATLANTA
The dirty birds have been playing with fire in each of their wins. They’re 3-0 but haven’t exactly blown the doors off anyone. They survived against Philly & their clogged toilet offense. They beat the Giants who gagged away the game. And then they had to comeback against Brandon Weedon's fat face in Dallas. (Although they ultimately pulled away in the 4th). Factoring in all that, I’m not sure how comfortable I am about picking them giving 7 points. But who’s the quarterback for Houston? Ryan Mallet? Ok, I feel very comfortable laying the 7. The announcers will undoubtedly be blowing JJ Watt all game. But he will be double teamed every play. He’ll be in more commercials than tackles on Sunday. (A quick somewhat related rant: We all have Deflategate fatigue, but remember when Houston’s owner Bob McNair said JJ Watt would never be in this mess with not giving up his cell phone and blah blah blah? Trust me, you don’t really want someone looking deeper into your own backyard. Because I’m sure JJ Watt is the size of a baby elephant naturally. Maybe just focus on who your team is going to take with the inevitable top 10 pick this year. End rant) Falcons win by 2 touchdowns.

Oakland (-3) @ Chicago – The Pick = OAKLAND
The Oakland Raiders are road favorites? When’s the last time that happened? Was Madden still the coach? The Raiders have been a model of dysfunction for over a decade. And have you seen their owner? His name is Mark Davis. Holy mother of god. He has to be the ugliest owner in sports. HAS TO BE. He’s a horrid looking ginger. And he apparently cuts his own hair. Only explanation for the Moe Howard do he’s rocking.


As for the team, they actually have what could be considered a professional offense. Derek Carr is a major upgrade over everyone they’ve had since Rich Gannon. Yes…Rich Fucking Gannon. Cooper & Crabtree are a solid receiving combo. And Latavius Murray balances the whole thing out nicely. But road favorites? How on earth can you take Oak-town as road favorites? The Bears are starting Jimmy Clausen Sunday. That’s how. Clausen has a dumb face. He looks perpetually confused. His play strongly suggests this as an accurate assessment. Take Oakland.

BRANDON’S BOOM PICK OF THE WEEK: St. Louis @ Arizona (-7.5) – The Pick = ZONA
This is a lot of points to give up in a divisional game. But the Cardinals are playing as good as anyone right now. The Rams on the other hand have a serious problem. The offense is atrocious. Nick Foles is not who you want running your team. I’ve read books faster than he’s read defenses. St. Louis has scored a total of 16 points in the last 2 weeks. And that was against Washington & Pittsburgh, neither of which have a good secondary. Miggsy has more hair follicles than the Rams have scoring drives. Arizona should have no issues defending that bald offense. I don’t expect the Cards to hang 40+ points like they have the last couple of weeks. But even if they just score in the 20’s, it will be more than enough. This game has a 27-9 feel to me. Zona wins convincingly at home.
Posted by Justin Enuffa Ballard at 1:09 PM