WWE Hell in a Cell Thoughts and Recap

Well another WWE PPV is in the history books.  Last night's Hell in a Cell was fairly decent but also fairly inconsequential.  The two Cell matches delivered on some level, incorporating a few new spots and unexpected storytelling elements.  Unfortunately neither match will likely have any long-term impact (I'll explain why in a few minutes).  The rest of the card ranged from pretty good to pretty bad, and sadly I didn't find myself very emotionally invested in any of it.  The fall season in WWE is always a bit of a hard sell for me, as Creative almost never seems motivated this time of year.  But the product has been particularly nondescript since SummerSlam, with few compelling reasons to care about much of what's happening.  WWE is once again in a holding pattern until 'Mania season, although at least Survivor Series is being presented as a celebration of The Undertaker's 25th anniversary (to the date actually, he debuted on 11/22/90 which is pretty neat).  So the company will likely try to stack that show for a change.  By the way, why does WWE insist on using images of Taker from 5 years ago on all their promotional materials??  It's a minor gripe but it's been bothering me since the SummerSlam poster was first published.  Taker hasn't had long hair since 2011.  We've seen him on television several times in 2015.  We know that's not what he looks like now.  What are you doing? 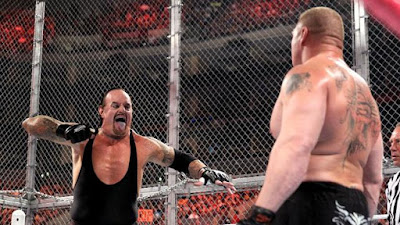 The pre-show match was a fun little six-man tag that I wish had been included on the PPV.  All of these guys need something meaningful to do.  Maybe they'll put together some kind of Survivor Series match for them, but relegating these six to the pre-show is ridiculous.  Still they got a good amount of time and Team Ziggler got a clean win.  Poor King Barrett.  Remember when he was supposed to be a breakout star?  Not sure where they're going with the "Stardust Trio" (real wrestling fans will get that reference), but I'd actually like to see a three-way Survivor Series match.  Stardust & The Ascension vs. Team Ziggler vs. Team Sheamus.

The proper show kicked off with John Cena's US Title Open Challenge, and rumors had been flying over the weekend about Daniel Bryan traveling to LA (where the PPV was held) and perhaps returning to TV to answer the Challenge.  So I was understandably excited at the prospect.  I figured I was about to be disappointed when Cena's match went on first, and the air went out of the room when Zeb Coulter wheeled in on his rascal (not sure what that was about).  Oddly though Zeb displayed a change in attitude, talking about embracing other cultures and nationalities, and this led to his introduction of the returning Alberto Del Rio.  I'd read that Del Rio was in talks to come back, which seemed a tad hypocritical given how much he ripped the company apart for being racist.  But whatever.  Anyway this match was not good.  Felt like a throwaway RAW match and the finish was so abrupt it totally undermined the magnitude of Cena dropping the US Title.  Now that Cena's off for two months I'm curious who Del Rio'll feud with (Not to mention why did Bryan fly to LA if not for that reason?  Maybe he'll feud with Del Rio, I dunno.).  Not a good start to this show.

Things picked up with the first HIAC match, as Roman Reigns and Bray Wyatt finally settled their months-long go-nowhere feud.  I legit still don't understand what these guys were fighting over.  But this match was pretty good.  They brought out a ton of weapons (Why are there always Kendo sticks under the ring?  Is Chuck Norris on the ring crew?) and executed some cool moments, like Reigns spearing Wyatt off the apron through a table.  My only problem with this match is that it should've been maybe six minutes shorter.  It was a bit meandering and hard to stay focused on, given how dull the feud has been.  But no real complaints otherwise.

The Tag Title match was alright and I was glad to see New Day retain (How hilarious would it have been if the teased Eddie Guerrero DQ spot had actually been the finish?).  Big E and Kofi were brilliant in their post-match celebration.  TND is still the best act on the main roster right now.

The Divas Title match was arguably better than last month's.  Charlotte and Nikki worked hard and got just over ten minutes.  Loved the Alabama Slam to Charlotte on the ring apron.  Now that Charlotte's turned back Nikki again we should hopefully see her fight either Paige or Sasha.  This was one of the three best matches of the night, which is encouraging for the women.

The WWE Title match was well-worked but as I said before, Kane wasn't even remotely a threat to Rollins' championship so there wasn't much to latch onto.  It was essentially a strong RAW main event but didn't belong on a PPV.  The match-ending Pedigree looked bad.  Rollins desperately needs someone good to work with now.  Ambrose, Bryan, or even Reigns would be alright.  Just treat the guy like his matches are important.  Christ!

Kevin Owens vs. Ryback was another throwaway and it was disturbing to see both secondary titles given so little time.  The US and I-C matches were the two worst on the show.  Time for Owens to get a good challenger as well.  Interestingly all the men's Championships are held by heels now.

Taker vs. Lesnar, while obviously not as good as their 2002 Cell match, and arguably not even as good as their SummerSlam one, was a perfectly enjoyable main event.  Lesnar gushed early which certainly added that much-needed layer of drama.  Of course the ringside doctor had to get involved multiple times to try and close the cuts, and hilariously Lesnar told him to get lost.  Taker actually bladed, which might be the first time we've seen that since the blood ban in 2008.  The action in this match was fine but nothing we hadn't seen before until Lesnar ripped open the canvas and removed the padding.  That was certainly unusual and made for some memorable visual moments.  The right guy won, but then The Wyatts showed up to ruin Taker's night even further.

So here's where I don't think either Cell match had any real consequence.  Both Wyatt and Taker lost last night, but the closing moments of the show (and presumably what WWE wants us all to remember) involved two losers reigniting their feud from March.  I like that this is almost certainly setting up a four-on-four Survivor Series match, but #1 the Taker-Wyatt feud from 'Mania was pretty lame, and #2 both guys lost yet this Series match is going to get very high billing next month.  It just further reinforces that wins and losses don't matter much in 2015.  Plus Lesnar's gone now until January, and who knows what's happening next with Reigns.  They alluded to something last night with Ambrose congratulating Reigns and asking him if he's ready for "what's next."  I'm sure they'll set up something tonight.  But if it's not as big as the Taker vs. Wyatts feud, that don't make a lick of sense.

Anyway, Hell in a Cell was a passable show overall, to which I'll give a mild thumbs up.  The two Cell bouts were fine and all four guys found ways to make them appropriately violent.  The WWE product just lacks direction and urgency, per usual.  I'd like to see Survivor Series treated as a major show again; the old-school editions were among my favorite PPVs of the 80s and I miss the idea of all the top stars forming teams to combat each other.  I also don't see Taker losing two matches in a row (especially given the 25th Anniversary gimmick), so Bray's gonna get screwed once again.  That guy desperately needs a purpose.

Best Match: Probably Reigns vs. Wyatt, though the Taker-Lesnar match was very close.
Worst Match: Cena vs. Del Rio - Both guys seemed really unprepared for each other and the ending was so anticlimactic as to be surreal.
What I'd Change: Guys, your ratings are in the shitter, your top star is leaving for two months, clear Daniel Bryan to wrestle.  He says he's ready, his doctor says he's ready.  What's the problem?
Most Disappointing Match: Cena vs. Del Rio
Most Pleasant Surprise: The amount of blood in the main event.  HIAC matches should basically always involve blood.
Overall Rating: 6.5/10
Posted by Justin Enuffa Ballard at 11:04 AM