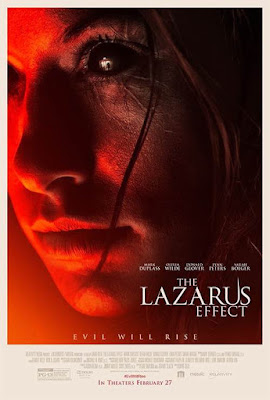 In a plot line that reminded me of 1990's Flatliners, a bunch of surgeons are working on a serum that's supposed to be used to help coma patients. But in fact, it's able to (DUN-DUN-DUUUUUN!!!) bring the dead back to life.

Duplass and Wilde are the head doctors in this mad scientist's lounge. They're also loooovers. Once they figure out this Romero juice works, the first thing they use it on is a dead dog. He breaks out of his rusty cage which is being guarded by others in the lab. It takes this pup about nine minutes before he goes all Cujo on these sorry sons of bitches. The stunt with the dog gets their funding taken away, so these dopes decide to break in to steal their serum. In a freak accident (Are there any other types in these movies?) Wilde's character gets killed, so of course these geniuses pump her up with reanimating 'roids and she comes back.

She gets some weirdo telekinesis powers that make her relive the time she was dead over and over. It also allows her to share it with all her friends in the lab. That's always nice, sharing your hellspawn murder rage powers with others. Something to look forward to at the holidays.

What follows is a lotta "been there, done that" horror scenes. Little scary girls in long, grimy hallways, out of focus images of scary people, and weird, freaky dolls. None of it is scary. It's all paint-by-numbers garbage. It seems when a writer can't come up with something original to be scary in a horror movie, he goes back over what's been popular in the past and tries to put his own spin on it. The problem is in this flick, the writer's spin is mostly jump scares and bad lighting. It's awfully predictable and boring.

It's a shame too.  It wastes two really good actors in Duplass and Wilde. They're both acting far above the crappy material they're given. The lead up to the disappointing conclusion is quite boring as well. This ones a snoozer.

THE GOOD: Duplass and Wilde are good. The dog is definitely the type whose belly enjoys getting rubbed and you'd get a leg going. There's one really cool kill in the movie involving a coat closet.

THE BAD: Evan Peters is wasted in a pseudo stoner type role.

THE DUMB: The supposed horror in this horror movie. I dunno what I'd call it, but it ain't scary.

SHIT OR HIT: Shit. Lazarus needs to go back to the lab.
Posted by Justin Enuffa Ballard at 9:45 AM